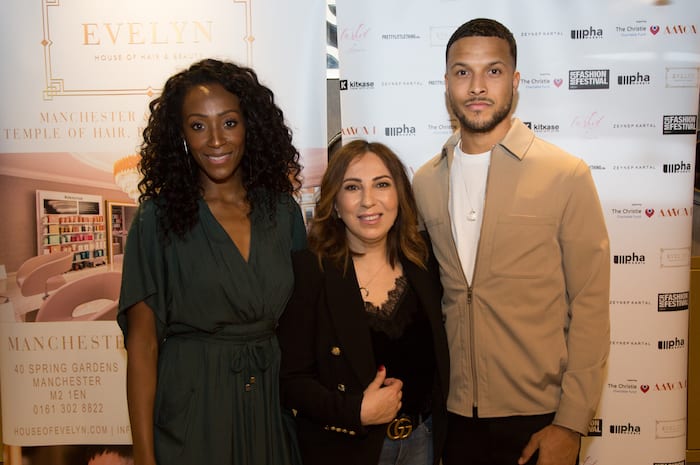 It was an afternoon of fashion, fundraising and football at Hotel Gotham at a glitzy charity bash in aid of The Christie hospital.

Live catwalk shows, star performances including from ex-Corrie favourite Victoria Ekanoye and a sumptuous afternoon tea at the Honey Restaurant were in store at the top of the Art Deco-themed hotel on King Street, Manchester.

Thousands of pounds were raised at the event, including from the auction of a raft of limited edition t-shirts designed by Aisha Kamani, matriarch of the Boohoo and PrettyLittleThing Manchester fashion empire, who modelled her special one-off bee design top on the day.

Former footballer Joe Thompson made a moving speech at the event, three weeks after making the decision to retire from the game after bravely battling cancer TWICE.

Joe had the audience in tears as he told his story of battling back against the odds, before finally making the decision last month to retire from professional football.

The dad-of-one said of his decision: “In many ways it was a relief. It was a hard decision to make but I had 18 years in football. But since then so many doors are opening for me.”

Manchester-based fashion designer to the stars Zeynep Kartal gave an exclusive showcase of her Autumn/Winter collection of gowns, with Aisha Kamani and Stacey Giggs (ex-wife of football manager Ryan Giggs) modelling at the finale of the catwalk.

Zeynep is known for her stunning full-length gowns with intricate ruffle and feathered details worn by some of the world’s biggest stars.

And The Royals and Corrie star Victoria Ekanoye gave a show-stopping performance at the finale of the event singing Fever, River Deep Mountain High and Proud Mary.

Victoria, who left Corrie earlier this year after two years playing Angie Appleton, has been having a well-earned break since leaving the soap. But she could soon be Hollywood-bound after significant interest in the States following her role in hit drama The Royals.

Victoria says: “I’m not moving full time to America, but there’s some exciting things in the pipeline in the States.”

The Gotham afternoon charity tea was organised by the Real PR entrepreneurs Lisa Forshaw and Laura Stubbs, and supported by PrettyLittleThing, House of Evelyn hair and beauty, Kitkase, Lashed and PHA Models.

Read More »
September 28, 2020
PrevHave you read?Are Mancunians being priced out of homes in the booming city centre?
Next read...In the Night Garden Live has star appeal at The LowryNext