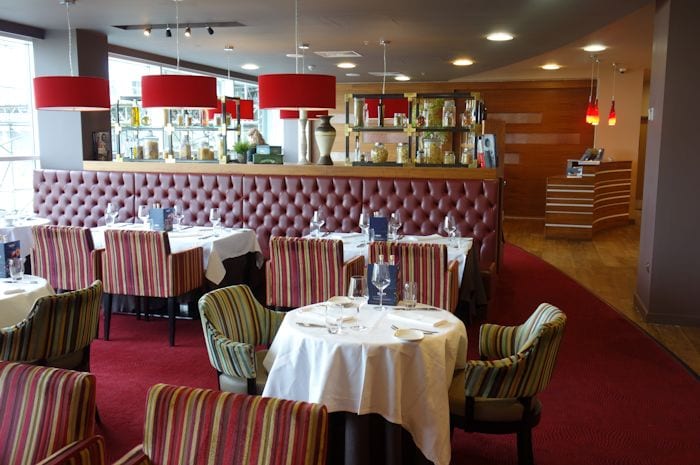 Everybody has an opinion. They used to say ‘opinions are ten a penny.’ Now they’re two a penny. That’s inflation for you.

Have you ever read a restaurant review and disagreed with it? Or been to a restaurant and had a completely different experience from your companion?  She Says, He Says brings you two reviewers for the price of one.  She is a bit of a foodie.  He just likes his food.  They share the same dishes and make their own notes but there is strictly no conferring. 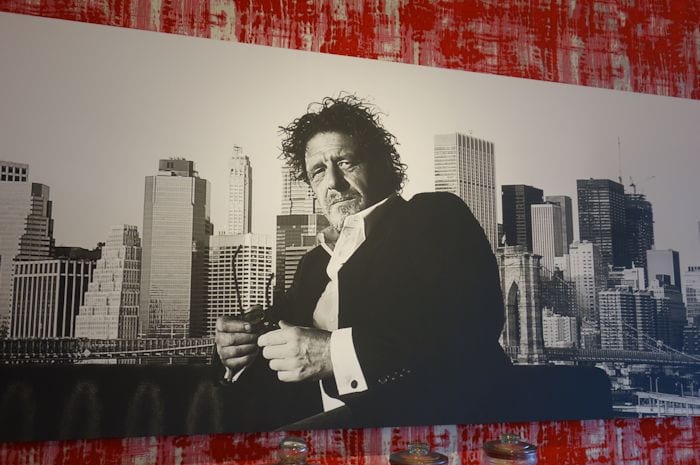 In these days of wall-to-wall TV cookery shows on TV, it’s easy to forget that Marco Pierre White was a celebrity chef when Jamie Oliver was still at primary school and having turkey twizzlers for his tea. Known as much for his tumultuous private life as much as his culinary skills, Marco Pierre was the first British chef to be awarded three Michelin stars  – and one of the youngest – and has been involved with some of London’s finest restaurants.

He hung up his whites in 1999 at the age of 36 to pursue his business interests including a number of franchises. You may have seen him on TV adverts extolling the virtues of Knorr stock cubes which he claims are his ‘secret ingredient.’

We arrive at Media City to find The Holiday Inn undergoing maintenance works and covered in scaffolding. It’s not the most prominent of Media City sites and is set back from the more high profile waterfront venues. The restaurant is on the mezzanine floor of the hotel. Our welcome is warm.

The great man may not be around but his presence looms large in a number of black and white photos, reinforcing his involvement with the brand. It’s comfortable enough with red stripy banquettes and lots of clean linen but the décor looks surprisingly 70’s despite the fact that it’s only a couple of years old. More Holiday Inn than Marco Pierre White.

‘My New York Italian is all about creating a comfortable environment for friends and family to relax and enjoy some of my favourite Italian and American foods, without having to break the bank,’ says Marco at the top of the menu,  but with starters priced between £6 and £10 and mains £10 to high twenties, prices are on the higher side.

The dishes cover all American-Italian bases (this theme is slightly overdone in many of the dishes titles) but there isn’t too much ambition on display and little to suggest that it has been put together by a chef of his calibre. 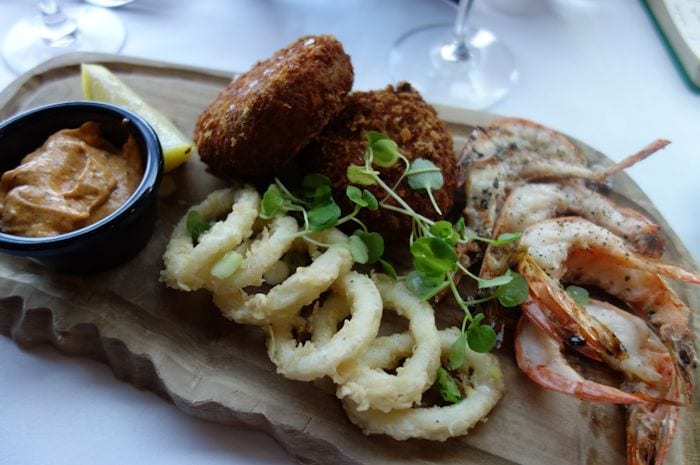 She says: this should be one of those starters where the product shines through. The freshness of the seafood and its handling is imperative to its success. The grilled jumbo shrimps were either near their sell-by date or had been through the freezing process as they were mushy, overcooked and didn’t have much flavour. The crab cakes needed to be firmer in their consistency. They were also too spicy so that you could hardly taste the delicate crab. Crispy calamari were better, lightly battered and not chewy, if on the small side.

He says:  I don’t like eating from boards and I don’t know anyone who does. I much prefer white crockery. The calamari were a bit soggy, the shrimps on the slender side and  the crab cakes creamy but a bit too spicy. I found myself sweating quite a lot after this course. Not sure whether this was because of the unseasonably warm weather or the crab cakes. 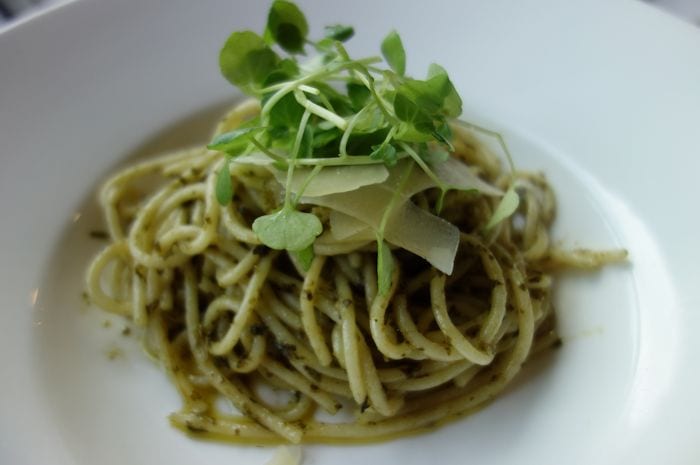 She says: fresh basil should have been singing through the lightly oiled pasta but the herbs were totally lost in the pesto sauce and it had little taste. The pasta was also slightly overcooked. Not great for something that should have been so simple.

He says: Marco says at the top of the menu, ‘If I had to choose only one cuisine to eat for the rest of my life, it would be Italian.’ Same here, and my favourite dish is pesto.  I love it so much that I have it once a week and have done for as long as I can remember. This one was disappointing and lacking in flavour. 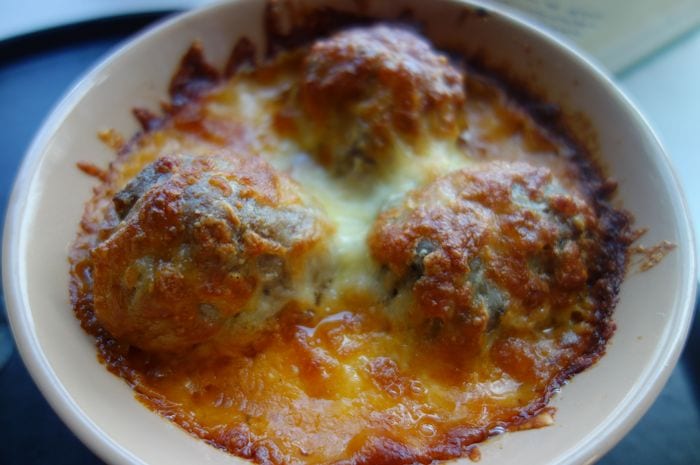 She says: these weren’t bad meatballs although I would have preferred a bit more beef in the pork/beef mix. They needed a lot more tomato sauce though, and more herbs, to make them properly tasty. I didn’t mind that they came with garlic ciabatta but I know He would have preferred pasta.

He says: Delicious. Easily my favourite dish of the day, more than making up for the disappointing pesto. But what made them so tasty? Could it be Marco Pierre’s secret ingredient-a Knorr stock cube? 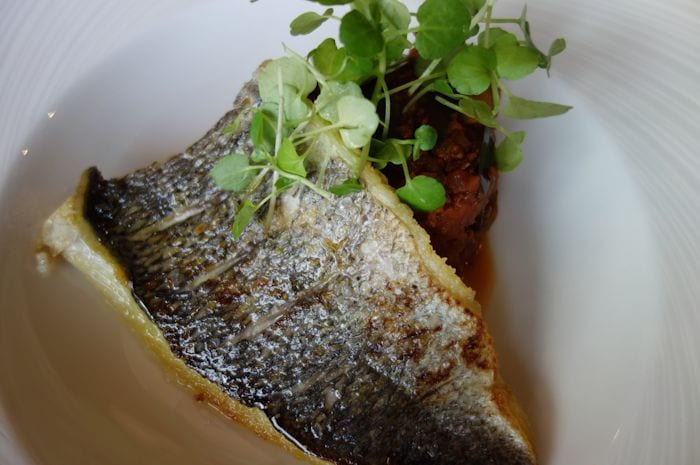 She says: Seared seabream was cooked well although any fish served with the skin on should be crispy in my opinion. This one wasn’t. The accompanying caponata was all aubergine, with very little vinegar and capers so the zing required to accompany the fish was lacking.

He says: On reflection probably not the best choice for me as I had no idea what caponata is and I’m not a huge fan of aubergine. I really should have read the small print. The seabream was nice enough. 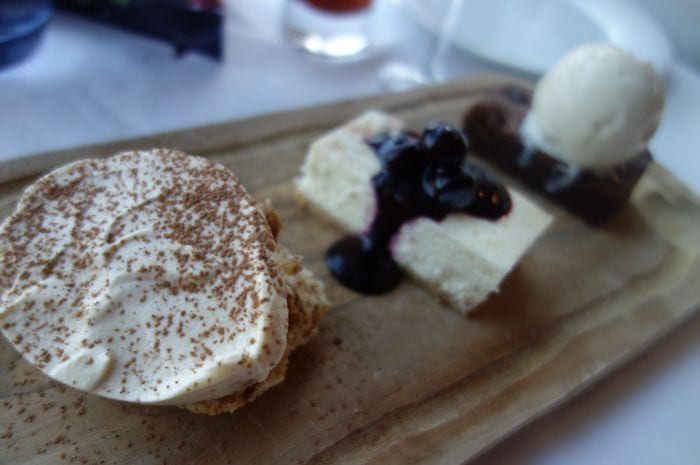 She says: The proof’s in the pudding so they say. On the whole here I agree, as the chocolate brownie and blueberry cheesecake were both OK. On a final positive note, the tiramisu was a pretty decent example of this classic Italian dessert, with really good coffee liqueur flavour and creamy mascarpone I wanted more of.

He says: Another wooden board. The tiramisu was the star of the show. Lovely and creamy. The cheesecake and brownie were OK and supplied the sugar hit I crave after a meal.

We drank two excellent wines, their Fiano Da Luca (£5.65 175ml) big colourful white that could easily handle the strong flavours in the starters, and their Chianti Superiore (£6.50 175ml), an earthy red especially good with the meatballs.

Staff were friendly and attentive throughout our meal, but when you visit a restaurant bearing the name of Marco Pierre White you expect something rather special, even if it isn’t a fine dining establishment. Despite the black and white portraits and stack of cookbooks, there was little evidence of his culinary skills here.