REVIEW: The Crucible at the Royal Exchange

“It is rare for people to be asked the question which puts them squarely in front of themselves” ― Arthur Miller, The Crucible.

The Royal Exchange Theatre in Manchester could be considered the ideal venue for The Crucible, Arthur Miller’s 1951 masterpiece. With its central, as opposed to proscenium, stage, the audience is placed in a position of judgement, surrounding the actors. But as the drama unfolds, members of the audience are drawn more and more into judging themselves rather than the characters being portrayed onstage.

“persecution
still occurs far
more often
than we would
like to admit.”

You may wonder how we can see ourselves in the solemn setting of 1692 Salem, an American town in the year of the notorious witch hunt. Yet behind the history lies a tale which even makes the scandals of a TV soap opera seem mild by comparison.

Miller constructs his drama around what are reported to be real life events we can perhaps relate to. These include a young woman’s lust for an older married man, the consumption of suspicious brews and a teenage revenge plot in which the brattish Abigail Williams, unable to have the man she wants, strikes down the competition as ‘witches’. Move over Twilight. Caroline Steinbeis’ careful direction of The Crucible turns witchcraft into the one to watch.

From the opening scene of frenzied footsteps and shrieking girls to the angered screams of Reverend Parris – a self-absorbed, snivelling man excellently acted by Stephen Kennedy – Steinbeis makes us quickly aware of all-too-familiar frayed nerves and fiery tempers. Her direction of a play set in a puritanical God-enthused society is interesting. In the first half of the drama, there seem to be more displays of people fearing each other than fearing God. The people of Salem are all suspicious of each other, and it is against this background of insecurity that a greedy girl’s game turns into a terrible witch hunt. 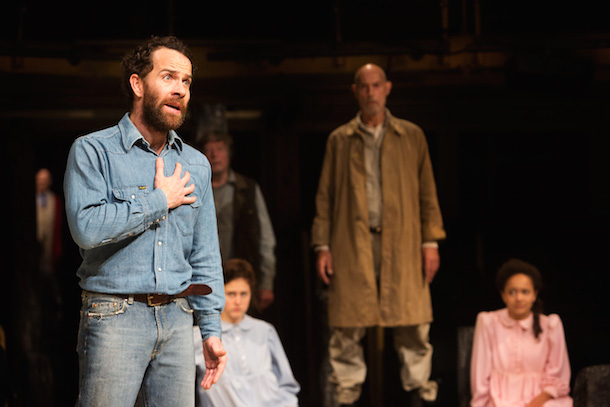 But who is the hunter and who the hunted? It is hard not to grow increasingly uncomfortable, for although the audience is placed in the position of judge, the characters are so complex and so different that it is difficult to categorise them as ‘good’ or ‘bad’.

For example, we may feel wary of Parris’ niece, Abigail, who nurses a resentful passion after her ‘affair’ with Proctor. We may laugh at Proctor, a farming man who brings a touch of comedy with comments such as ‘There might also be a dragon with five legs in my house, but no one has ever seen it.’ Yet this is uncomfortable laughter. Not only does Proctor’s commonsense insight show the absurdity of a society obsessed with witchcraft, but his comedy makes him human. In fact, the majority of the characters are three-dimensional, highly human, each incredibly complex, with the respect-commanding Rebecca Nurse (Marjorie Yates) and clumsy Mary Warren (Ria Zmitrowicz) giving shout-out performances.

And in the humanity, we see ourselves. The drip, drip, drip of guilt grows as the audience relates to the unfolding events – how a serious conversation turns into petty name-calling over belongings, how lies are told to protect the feelings of others and how easy it is to blame the authorities before we blame ourselves. Are we not guilty, too?

It is in the second half of the play that the dripping tensions become a flood, quite literally, when water fills the stage. It’s a powerful symbol of the purity these people have strived for and it’s ugly, too – a great big glut of guilt bubbling in the centre.

It laps around the legs of the characters like a chain, joining the cold judge Danforth with the persecuted Tituba, connecting the gentle goodwife Elizabeth Proctor to the jealous Abigail who accused her.

In a play where the line between imagination and reality is often blurred, it becomes clear that we are all human, flawed and fearful – a powerful message conveyed by skilled directorship and acting, together with designer Max Jones’s clever use of space on the stage – especially the kind of ‘sacrificial slab’ where the first ‘witch-stricken’ child Betty lies.

Costume plays an interesting role, too. Whilst the females are dressed in 17th century costume, the men’s clothes become increasingly modern, especially those worn by characters in positions of authority. This reminds us that hierarchies based on insecurity still exist today and that persecution still occurs far more often than we would like to admit.

The depiction of Salem society feels a little laboured at times, particularly the later court scenes, but also serves to highlight the structures society builds in order to appear ‘pure’ and ‘good’.

The Crucible invites its audience to consider themselves and their social positions, and thanks to an energetic cast and atmospheric staging, this production succeeds in making the performance relevant today.

As John Proctor yells before his inevitable death, “Leave me my name.” We are left to reflect not just on what makes us ‘pure’, but what we have made of our own identities.