Review: My Favourite Place in the Whole Wide World is both heartfelt and funny 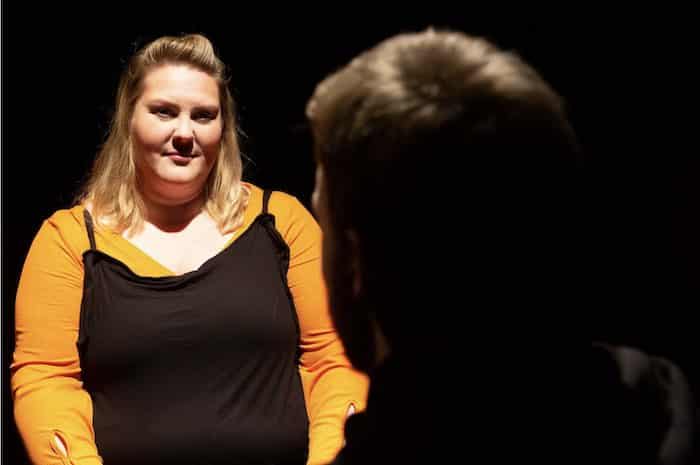 Theatre has the ability to soothe your soul and enables you to escape momentarily from current news events.

You may feel helpless but want to act and do something, but you do not know which way to turn and what will make a difference.

That feeling of numbness and a sense of being stuck in one place, as the world moves on leaving you with an ‘out of body experience’, is shared by the two protagonists in Ian Townsend’s new play, My Favourite Place in the Whole Wide World. 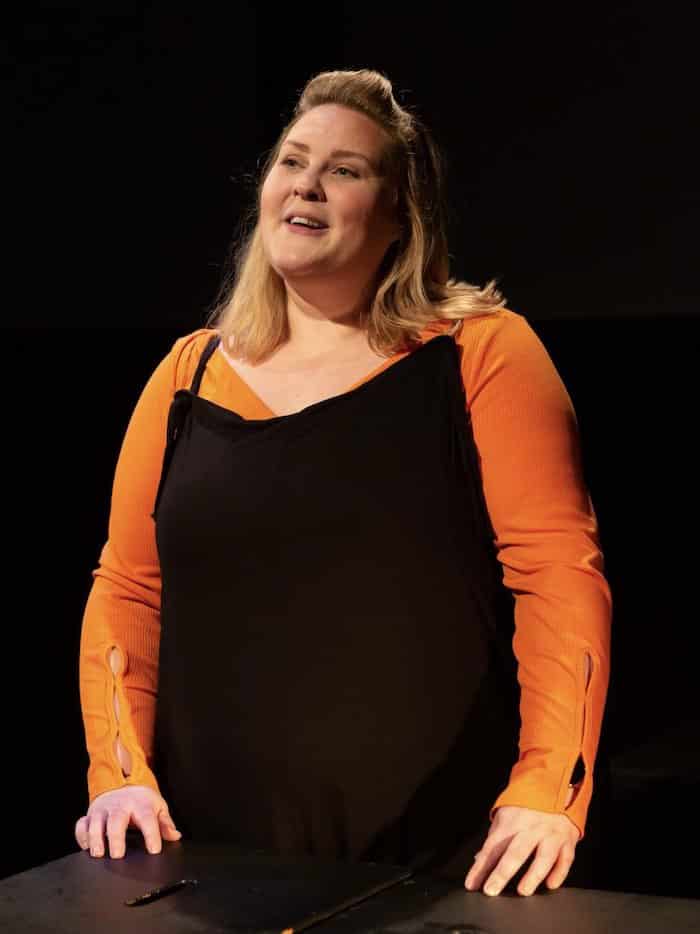 J and Ruth live separate lives and as they grow up, though they both experience loss, guilt and struggle to comprehend what they are going through.

What connects them is their resilience and Northern humour, which can be cutting, funny and empowering as their words are weapons against those that do them harm.

Most of what they seem to aim at others is unsaid; the thoughts in their heads, locked and loaded but never used. But Ruth speaks her mind, frequently, and it lands her into trouble.

Luckily for us, we hear their monologues in act one, and the words they use are earthy, heartfelt and there is real light and shade, due to Ian Townsend’s gritty and wonderful wordplay. 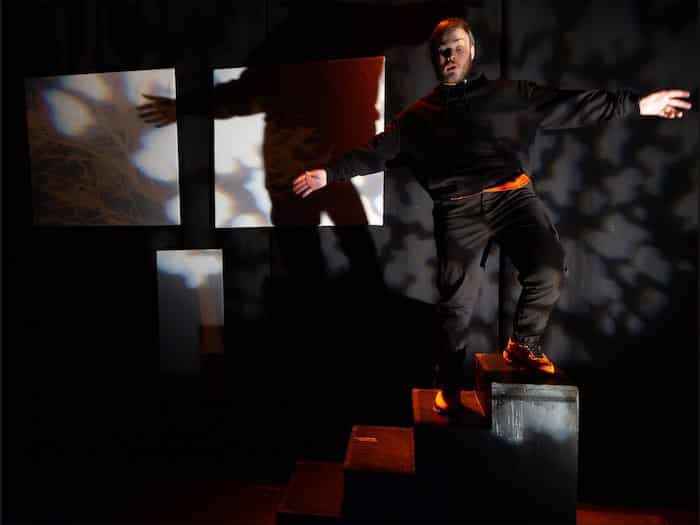 Townsend is from Mossley, so there is something familiar about these characters. They pick themselves up, they are both sweary, witty and say it like it is.

Not everything you witness and hear is grim and relentless; every line is loaded with something funny.

But like a bar of dark chocolate, you get that bittersweet aftertaste, a bit like life following this pandemic. Every now and then, a reminder of what you have been through hits you like a truck.

Claire Eden imbues Ruth with optimism as a child, as she plays her from the age of three.

She begins as a little girl who wants the best from life. As she progresses through school, other kids dent her confidence, alongside trauma that she goes through.

Eden manages to flit between comic moments and darkness with real ease. She manages to convince you to like Ruth, even when her behaviour and actions are not endearing, and her comic timing is spot on.

Ben Kenzie matches this performance, as likewise, he explores J’s childhood and beautiful moments with his granddad, contrasting with tragic moments which shape the rest of his life, moving forward.

His expert body language convey the idea that he does not always feel that he belongs, and Eden does the same.

The first half of the play is beautiful, and Townsend’s words bounce across stage, landing with a poignant moment or burst of laughter. 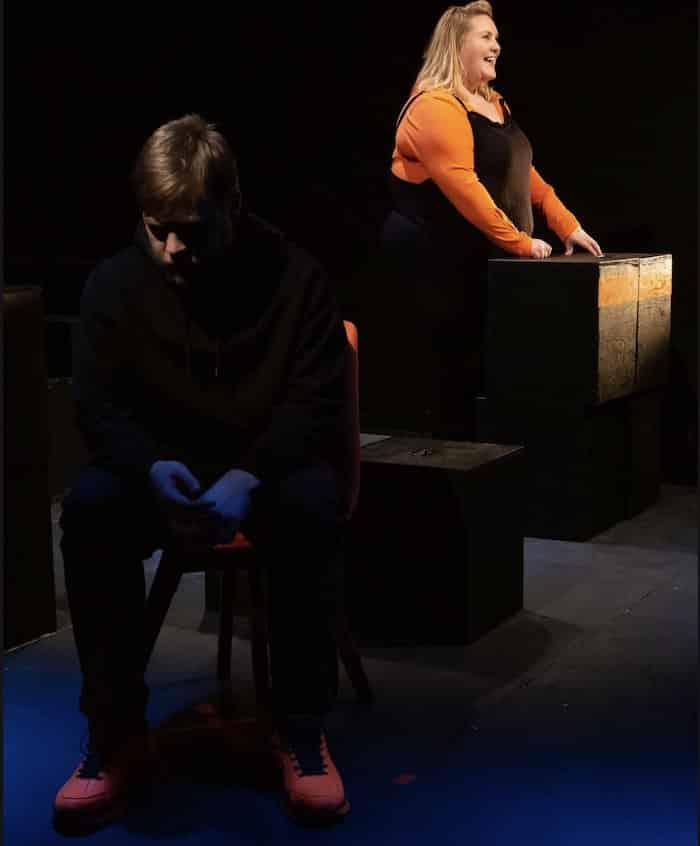 The second half attempts to link the characters as they both meet and learn from one another. This feels more clumsy and not quite as effective.

In the main, this is because the monologues are so well developed and realised, that we know these two inside out, or at least we think we do. This is ‘their’ version of themselves.

But when the two meet, they ‘fess up and talk about things in a way that serves the plot but does not feel as gritty or as funny as what has gone before.

The use of video projections to illustrate the water that J pays back to Ruth after using her shower when his boiler breaks down, feels very Sesame Street. Sound effects alone would work better here, as the video distracts you and does not add anything.

For me, the play could end after act one, because the unsaid stuff really resonates and the characters feel more fully realised.

The connection between them is the fact that they both feel lost, but you get a sense that their wit and survival instinct will keep them afloat; it would be far more effective to have them pass each other on the street or on a corridor and connect with a glance and then close, leaving the audience to decide what happens next. 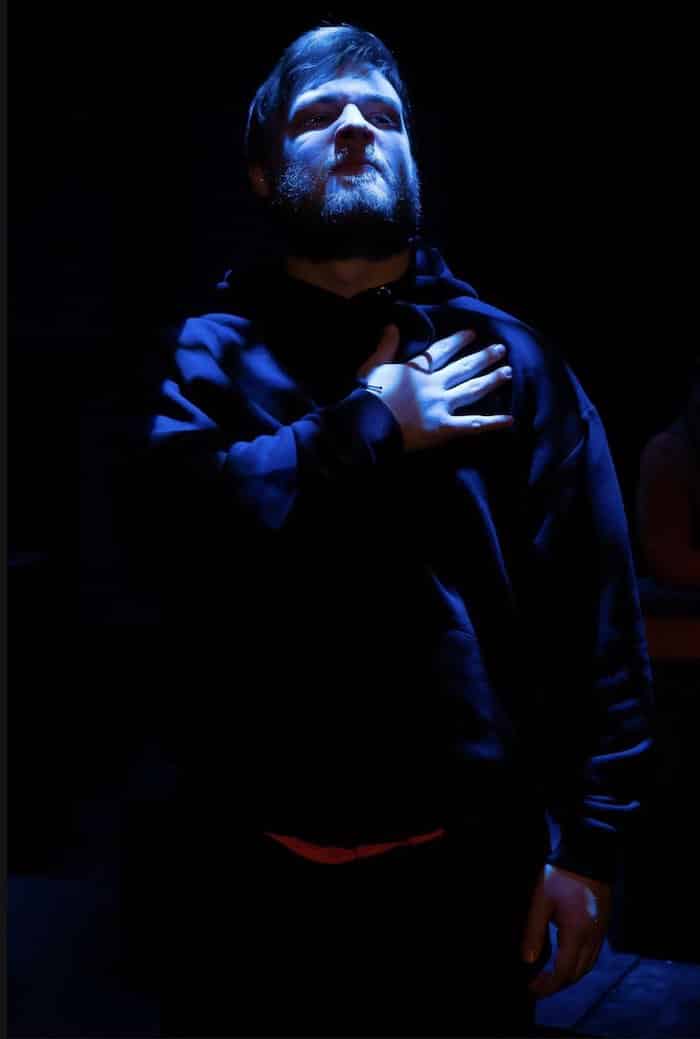 James Schofield’s direction is assured in the first act and he focuses on pain but never forgets the optimism.

The set, consisting of blocks which represent the worlds these two lost souls find themselves in, works very well, as they both build walls to keep others out.

The second act does feel too long and seems to serve only as a device for these two characters to meet.

I enjoyed spending time in J and Ruth’s company very much and My Favourite Place was being immersed in Ian Townsend’s moving monologues, delivered with raw reality by Claire Eden and Ben Kenzie.

My Favourite Place in the Whole Wide World is at the Hope Mill Theatre until Sunday 6th March and tickets can be booked here.