Review: Mike Leigh’s Peterloo is a powerful, intelligent and heartfelt film that seethes at injustice 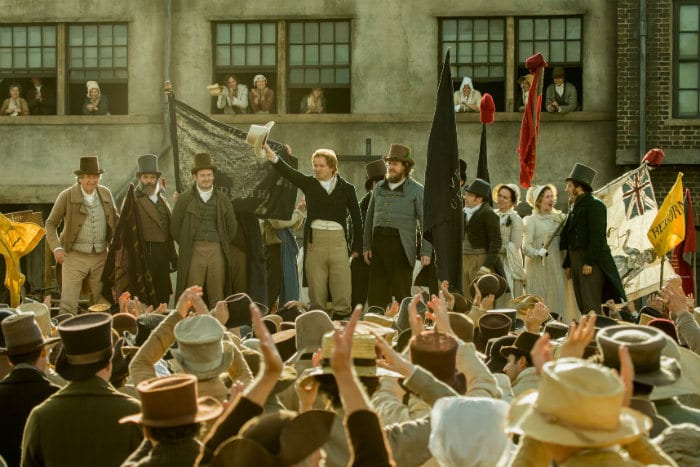 The Peterloo Massacre took place in 1819, in St. Peter’s Field, when the government ordered a brutal military charge into a working class crowd of around 70,000 peaceful protesters, leaving 15 people killed and hundreds injured.

The film Peterloo is something of a passion project for Salford-born and bred director Mike Leigh, who has publicly stated that he believes the Peterloo Massacre should be taught in schools.

If that ever comes to pass, his film will provide the perfect study guide, as it meticulously explores the complex chain of events that lead to the massacre.

The film begins in 1815, with traumatised soldier Joseph (David Moorst) stumbling through the carnage of Napoleon’s defeat at the Battle of Waterloo.

He begins the long trudge home to Manchester, where he’s reunited with his poverty-stricken family of mill-workers, headed by his father Joshua (Pearce Quigley) and mother Nellie (Maxine Peake).

With the price of bread sky-rocketing because of the recent Corn Laws (effectively banning foreign imports and forcing inflation) and Parliament refusing to extend the vote to the working class, Joshua begins attending meetings held by passionate advocates for parliamentary reform.

As economic conditions continue to worsen, the need for a voice in Parliament grows  louder. The Manchester Patriotic Union organises a giant demonstration at St. Peter’s Field, which is to be addressed by well-known radical orator Henry Hunt (Rory Kinnear).

However, a group of self-interested local magistrates have been secretly monitoring the reform groups through a network of informants. On the day of the demonstration, they order Hunt’s arrest, sending the Manchester and Salford Yeomanry charging into the crowd and precipitating the massacre.

As with his previous film Mr Turner, which was also set in the 19th century, Leigh creates an impressive sense of time and place, aided by some painstakingly detailed set design and painterly compositions from cinematographer Dick Pope.

Similarly, there are multiple characters and no central point of view, though Maxine Peake and her family effectively form the film’s moral centre. 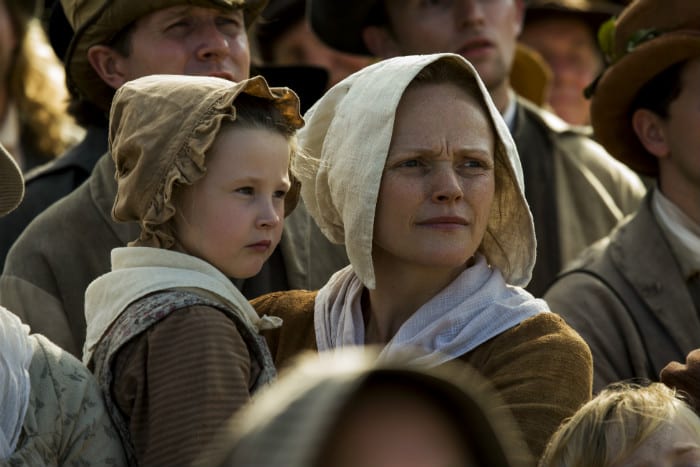 Occasionally, the dialogue can be a little too on-the-nose, not least when two journalists survey the devastation of the massacre and spontaneously come up with the name Peterloo. (“It’s like Waterloo…” “It’s Peterloo” “Yes, the Peterloo Massacre. We’ll print that…”)

With so many characters to keep track of, Leigh can be forgiven for indulging his penchant for caricature. To that end, Tim McInnerny goes full Blackadder in his role as the foppish Prince Regent, who mistakes a potato thrown at his carriage for an assassination attempt.

Similarly, Kinnear is good value as Hunt, who’s portrayed as well meaning and passionate about his cause, but also rather pompous. “Bring me a light repast!”, he barks to the working-class family charged with his accommodation, to which the response is a bemused, “What’s that?”

Peake is on typically excellent form as sceptical Nellie (“When has the government ever done anything to help us?”) and there’s strong support from Rochdale-born actress Christine Bottomley, as a vociferous member of the Manchester Female Reform Society.

Throughout the film, Leigh orchestrates a number of powerful moments, such as a montage of poor people receiving outrageously harsh sentences (hanging, flogging, even deportation) for crimes like stealing a loaf of bread.

When it finally comes, the massacre itself is appropriately devastating and unlike anything Leigh has attempted before.

Rather than go for an epic sweep, Leigh focuses on small moments within the battle and the effect is heart-breaking. Although the director doesn’t go in for blood and guts, there is nonetheless one historically accurate moment that’s guaranteed to make audiences gasp in horror.

Needless to say, the film is layered with contemporary resonance, with its talk of “fat leeches down in London” ignoring the plight of the northern masses and foreign tariffs leading to the stockpiling of food supplies.

Ultimately, this is a powerful, intelligent and heartfelt film that seethes at the injustice of the events of 16 August, 1819 and deserves to be seen on the big screen.

Peterloo will receive its UK premiere in Manchester at HOME on 17th October, in conjunction with the London Film Festival. It is in cinemas across the UK on 2nd November.