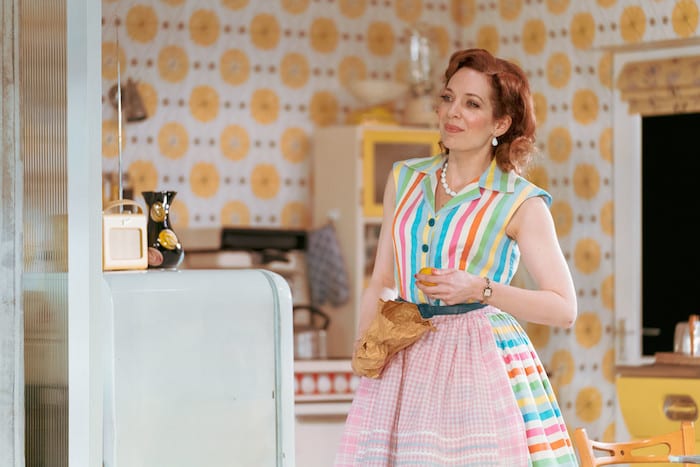 Home, I’m Darling is Laura Wade’s first original play since Posh, her 2010 satire on the Bullingdon Club which later became the film The Riot Club.

The story follows Judy (Katherine Parkinson, best known as Jen from TV comedy The IT Crowd), who is desperate to be the perfect 1950s housewife.

Judy certainly looks the part with her candy striped full skirts, frilly apron and perfectly coiffed shampoo and set. Her home is a pristine doll’s house of pastel colours: a lemon kitchen, a turquoise lounge, pink flamingos on the shower curtain and a kitsch pineapple ice bucket on the drinks cabinet.

And Judy looks blissfully happy staying at home to cook and clean while her husband Johnny goes to work. But when she suddenly pulls out a laptop once he has left, we realise this isn’t the 1950s. It’s the present day.

Johnny gushes that their old-fashioned routine – a cocktail ready for him when he gets home, dinner in the oven, shoes off and slippers on – makes the pair “offensively happy.” But are they really?

Perhaps every couple needs a little fantasy or role play to keep their marriage sparkling. But behind the vintage curtains and the chocolate chiffon cakes, things start to unravel.

Being a domestic goddess is not as easy as it seems.

“Wearing a frilly apron and dancing around with a feather duster isn’t feminism,” declares Judy’s mother, Sylvia, in a knockout performance from Susan Brown.

“Why do I need a job to be fulfilled? Why isn’t this valued?” asks Judy about her role as a housewife.

“Because men don’t do it,” comes the pithy reply. Maybe mother really does know best.

The conversation is raised again in the second half, by which time Judy has started allowing herself an afternoon gin and a cigarette, “because smoking wasn’t bad for you in the 50s, was it?”

“This gingham paradise you’ve made for yourself – you know it’s not real?” asks Sylvia, who can’t understand Judy’s desire to retreat into a world that existed before she was even born.

For Sylvia, having lived through the decade, it certainly wasn’t the candy-striped cocoon that her daughter imagines.

“The 50s were terrible!” she says, listing one bad memory after another – the bitterly cold house, the rationing, how bland and grey everything was.

“Everyone making do and mending things that were already wrecked.”

Nostalgia used to be considered a psychological affliction, she says, “not a branding exercise for tea towels.”

Even nostalgia, apparently, isn’t what is used to be.

The 50s facade is in fact barely papering over the cracks in Judy and Johnny’s marriage – cracks exacerbated by dropping from two household incomes to one and finding themselves struggling to pay the mortgage.

Johnny should feel “happy as a pig in shit,” he says. He should feel proud to be the provider and be tended to by a loving wife. But he doesn’t. He feels like a child.

And Judy’s frustrations frequently come bubbling to the surface. She used to have a high powered job in finance before she took voluntary redundancy, we learn. She has a degree.

“This isn’t a lifestyle. It’s my life,” Judy protests to her mother as she pours tea into china cups. But is she really fulfilled? She seems more Blanche DuBois than Doris Day.

Like the gimlet cocktails Judy makes every evening, the dialogue frequently fizzes, but there’s a sour edge, too.

But perhaps it’s not all hopeless. Perhaps Judy and Johnny will find their happy ever after through compromise and openness, and not being so rigid in their desire to do everything 1950s style.

“Sometimes we could just spend all day in bed and have someone bring us a curry on a bike,” says Johnny, which sounds fun though decidedly modern.

But would it better than Judy’s 1950s style baking? Because that chocolate chiffon cake looked delicious.

Nostalgia can be a powerful thing, even if we don’t always realise quite what we’re harking back to.

Home, I’m Darling is at The Lowry until Saturday 27th April.