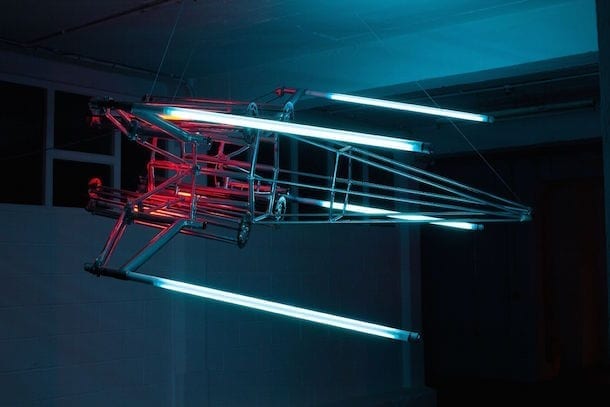 It’s amazing what you can do with some old bicycle frames and fluorescent light tubes. There’s an illuminated sculpture on display right now in Spinningfields which is made from those components. It features two iconic Star Wars craft, the X Wing Fighter and TIE Interceptor, and has been designed and created by Heavy Petal-a collaboration between lighting specialist Andrew Gibson of Tyson Lighting and Vinny Smith of Manchester-based interior designers Northern Backdrop.

Spinningfields is the first location outside London to host a public exhibition of the work. It was previously installed at a WIRED exhibition at Tobacco Dock in London where it attracted high profile attention from the media and a purchase offer from American songwriter and entrepreneur will.i.am. 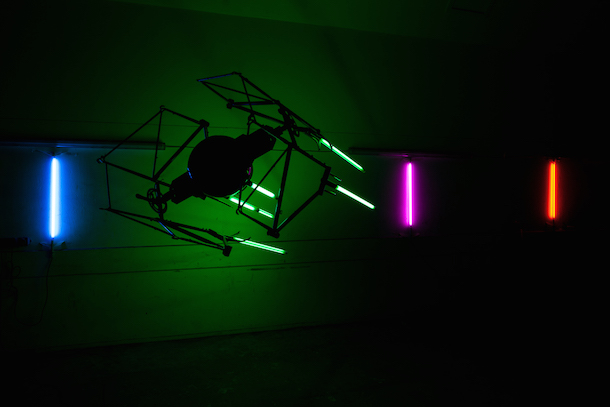 “The X-wing Fighter was made by fabricating together the frames of four Raleigh Grifters,” says Vinny. “The Raleigh Grifter bike was pre-cursor to the BMX and actually released around the same time as the first Star Wars film, Episode IV A New Hope, so it re-kindled childhood memories of mine that formed the basis of this installation.

“Since Heavy Petal’s appearance in WIRED magazine, we’ve had a lot of incredible feedback online from Star Wars and Comicon enthusiasts and we’re hoping that this Spinningfields exhibition will be the first of many. We’re hoping to complete the Star Wars Bike Trilogy to coincide with the 7th Star Wars film coming out later this year.”