Like scenes from a movie: current photos of ‘spooky’ Manchester city centre during lockdown 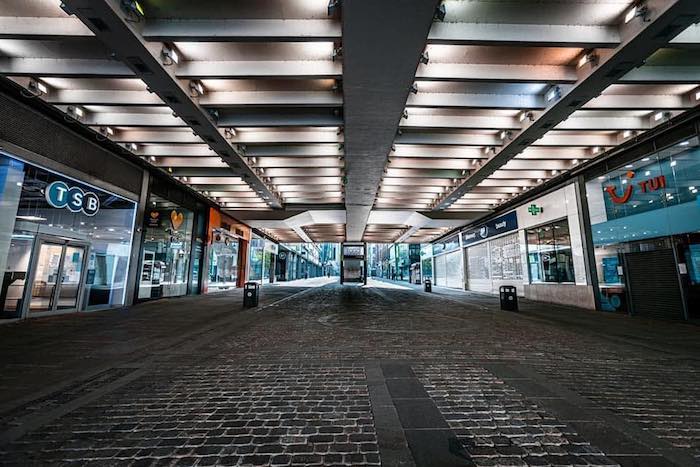 Since the lockdown began, our sense of time and memory seem to have lost all meaning.

Local photographer, Lucy Smith, had to go out into the locked down city centre for work to find it was like ‘a scene from a move’ as she reminisced booming city life before the pandemic.

“I couldn’t believe it… it was so quiet. It was like a scene from a movie,” said Lucy.

“Standing at the end of Corporation Street, the automated voice recording for the tram stop was SO LOUD – there was nothing to drown it out. Honestly, it was a little spooky!”

As well as noise pollution, there’s no question that the result of wide-spread shutdowns has temporarily cleaned the skies from air pollution.

From Chinese provinces to industrial cities all over the world, pollution levels have plummeted as lockdowns aimed at slowing the viral spread have shuttered businesses and trapped billions of people at home.

According to Real-time Air Quality Index, the current air quality in Manchester is considered ‘good and pollution poses little or no risk’ as oppose to six months ago when is registered ‘moderate’

According to National Geographic, in India, where air pollution is among the world’s worst, people are even reporting seeing the Himalayas for the first time from where they live.

“The colours of the trees seemed greener and I started looking up more,” Lucy continued. “Most times when I’m in Manchester I’m heading to a meeting, a meal or a shop. In and out [head down]. But yesterday was different. It was so quiet and strange.

“It was great to see the new Nightingale Hospital (at the Manchester Central Conference Centre). Amazing to see the provision made, but I’m so thankful it might not even get used!”

It’s a strange time we are living in and we will likely talk about this pandemic for generations. But for now, let us do what Manchester does best – stay strong.

“As I walked the street I began to realise: ‘Manchester – I miss you’

This is our Manchester. If you miss it, please share to pass on the love.