Not Your Usual Breakfast in Bed

Breakfast in Bed is one of a number of initiatives which have been set up to help rough sleepers on the streets of Manchester. 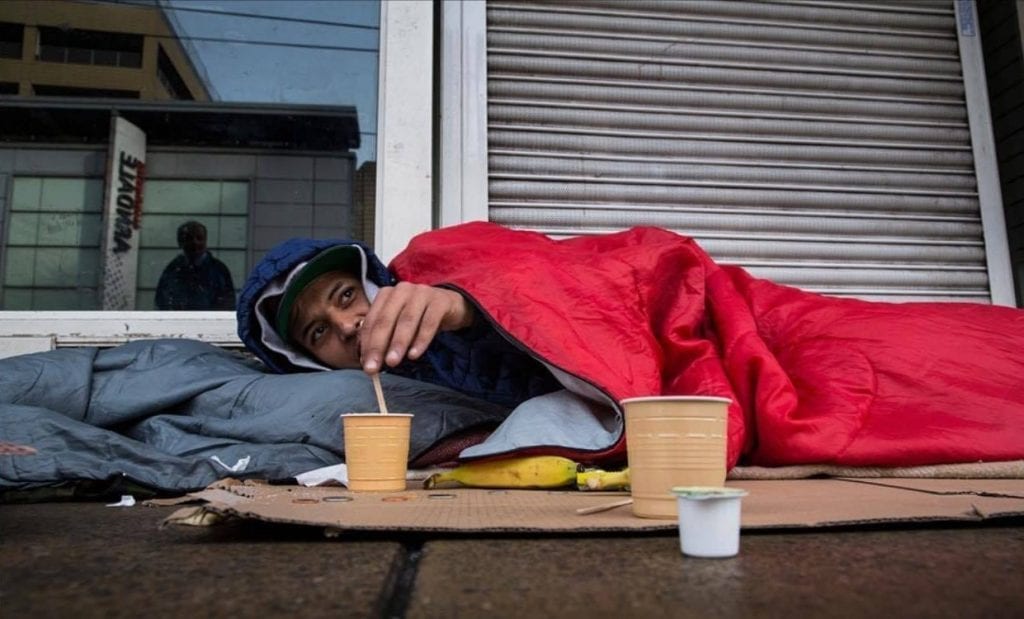 Breakfast in Bed was founded a year ago by Jamie Whittaker after he walked past a growing number of people on the streets in the freezing depths of winter and felt he had to do something about it, writes Dennis Keighron-Foster…

Last year was quite a strange one for the homeless people of Manchester. They’ve had some devastating setbacks-from having to deal with anti-rough sleeping measures, like spikes and metal fencing, and being openly and forcibly removed from public spaces, to the protests in multiple camps around the city centre – some of which were thought to be run by students and anarchists furthering their own political agendas.

“We try to
help them
to feel, well,
more human.”

They’ve had a few victories, though. Some of the anti-rough sleeping measures were removed and Gary Neville opened up his hotel to the homeless to see them through the winter, despite some initial controversy in the press and within the homeless community about how it was run.

Homelessness has finally caught the attention of the media and those in positions of power. It has become one of the city’s most talked about issues. The council have finally had to react to the growing pressure to sort out our own humanitarian crisis by opening up disused council buildings to house rough sleepers during the cold winter months.

Amidst all of the drama and the politics is a small group of volunteers who have voluntarily set themselves one simple task – to bring a breakfast sandwich and a hot brew to those fellow Mancunians who, for whatever reason, find themselves sleeping on the streets.

“I started this project by accident,” says Jamie. “I only wanted to offer rough sleepers something warm to eat and drink for a week last January when we had such extreme weather.

“Even though the council were offering all homeless people temporary accommodation, there were still rough sleepers on the streets first thing in the morning when I was going to work. It was absolutely freezing. I don’t normally feel the cold but I was perished and they had been on the ground all night.”

Starting off small feeding just 17 people, BIB soon grew and within just a matter of days the numbers went into the 30s. When last year’s temporary winter accommodation closed, the numbers rocketed to between 40 and 60 breakfasts, which is where it has stayed.

BIB don’t judge or have rules. Everyone gets a sandwich irrespective of their background or recent activities.  Jamie and his team of volunteers take to the streets three mornings a week, Tuesdays, Thursdays and Sundays, no matter what the weather or what their own lives dictate.

JoJo, Jamie’s right hand woman, came on board pretty much straight away, around month two.

“I’d been following Jamie’s updates when I was on holiday in Australia and offered to help as soon as I got back. I’ve started similar things in the past on my own, like giving out warm clothes and socks, and I know how much responsibility it can generate for one person to have to handle, so I offered my support to keep it going and to help keep Jamie sane!”

BIB has snowballed from the cold months of last year, right through the summer, as has the number of volunteers in Jamie & Jojo’s team, which has increased to a hardcore number of a regular 100 helpers, one of whom is an ex-homeless person whom BIB supported back into housing.

They also have a growing number of supporters and donors – nearly 1500 members on Facebook alone.

BIB hasn’t just stuck to breakfasts. They have started putting on monthly pop-up events, as it’s important to the project to reintroduce the people they help back into the community in whatever way that they can.

“We try to offer a service that many people can take for granted,” says Jamie.

“Stuff like shower facilities, haircuts, laundry services and new clothes. And we go out of our way to get something if someone really needs it, like a new sleeping bag. We try to help them to feel, well, more human.

“BIB is planning on trying to get some of the people we help off of the streets by offering temporary accommodation in B&Bs. If this works then we will try to find private landlords who might be willing to accept them and we hope to be able to offer higher deposits to help mitigate any risks the landlords may feel they are taking by giving an ex-homeless person a place to live. And we’ll continue to support them to stay in their new home.”

BIB believe that the public would be better giving their support to a homeless charity with time, money or goods, rather than giving money straight to a homeless person.

“The general public can help by linking with services or voluntary groups who offer support and engagement with the homeless or soon to be homeless. Enlist your time voluntarily or donate to organisations, or if time is not an option, offer goods or services rather than money to street beggars. More often than not this keeps some rough sleepers in a cycle of vulnerability, whether that is down to substance or alcohol dependence, or a dependence on this way of life.”

Having volunteered for BIB, it’s obvious to me how needed volunteers like those at BIB are. Homeless people aren’t sponges on society. Manchester’s homeless problem is actually no more than a few hundred people at best. A handful of people who have lost their way in this tough old world that we all call home.

Life hasn’t dealt some of them the fortunate situations most of us take for granted. Forwhatever reason the homeless men and women of Manchester find themselves in this situation, they deserve our kindness and compassion – not our judgement – particularly through these coldest of winter months.

If you’d like to help Jamie, JoJo and the rest of the volunteers at Breakfast in Bed, or donate money, or simply offer them your encouragement, visit their Facebook page.