On 22 May this year, 22 people were killed and 120 were injured in a terrorist attack at Ariana Grande’s concert at Manchester Arena.

Many of the victims of this terror attack were children, and the Manchester Arena has been closed since.

Last night’s gig was the reopening of the Arena, with a series of stars – including some of Manchester’s best loved talent – coming together to play and honour the victims of the attack.

After Inspiral Carpets keyboardist Clint Boon had opened the night with a DJ set, Lord Mayor of Manchester Eddy Newman paid a heartfelt tribute to the victims, before Mayor of Greater Manchester Andy Burnham read out the names of all 22 victims.

One of the first acts was Manchester poet Tony Walsh who performed a spine-tingling rendition of This is the Place before encouraging fans to engage in a minute of noise for the victims and their families.

One of the ringleaders of this chant was a laddish, swaggering Manc, rather like Liam Gallagher in his early twenties prime.

Five minutes later in the bar area, he just burst into tears, emotion flooding out of him and onto the shoulder of a girl he was with, seemingly overcome with the significance of the event.

This was symbolic of how bittersweet this night was going to be. It was going to be about defiance, togetherness, pride and joy, but people were never going to lose sight of the heart-wrenching reason for the gig, so amongst all the laughter there were also tears.

More stars followed, including Stockport lads Blossoms, singer-songwriter Pixie Lott, Rick Astley, Nadine Coyle. The evening was compered by Russell Kane, an honorary Manc for the night. Manchester boxer Ricky Hatton also took to the stage and said “this Arena is still going to produce the best concerts and fights for years to come.”

Where Hatton championed the venue, Manchester Grime MC Bugzy Malone spoke of the whole city and its people in the highest terms: “I love every single one of you, and we are the greatest city in the [world].”

A rowdy set from Middleton lads Courteeners epitomised the party atmosphere Manchester is known for.

Frontman Liam Fray said: “I think everything that needs to be said has been said, but just look at this fucking room!” 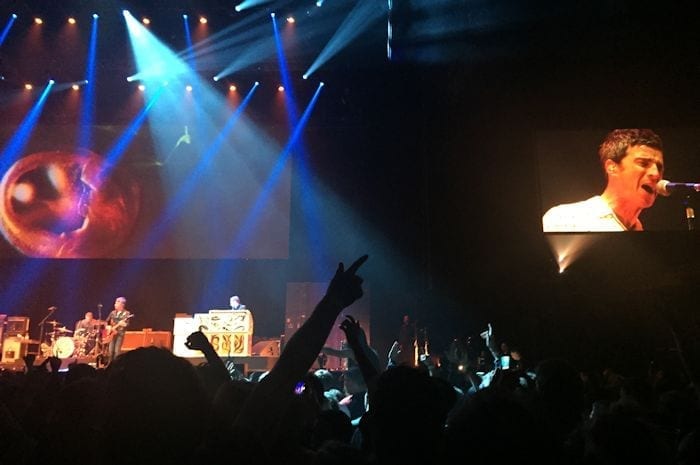 Bolton comedian Peter Kay worked at Manchester Arena on the first day it opened, so was a fitting celebrity to introduce headliner Noel Gallagher onto the stage, stressing that we must move forward “with love and not hate, and that’s how we win.”

Noel was tearful during his rendition of Don’t Look Back In Anger, a song which he acknowledged has come to symbolise defiance in the face of terrorism after the crowd broke into a spontaneous rendition of the song at a vigil shortly after the attack.

“Every time you sing, we win. So sing like you’ve never sang before,” he said.

During this song, complete strangers in the crowd started to put their arms round each other, sending out the message that we are united and terrorism will never win.

Afterwards, gig-goers shook the hands of police and security staff as they left the Arena. A man leaned into a police van and hugged a policewoman.

Unity was certainly a theme for the night. Lovers of Manchester’s music Jay and Frankie had travelled from Mansfield for the gig:

“I think no matter where you’re from, if you spend any period of time in Manchester, you’re always accepted. It becomes your home whether you’re born and bred here or not, it’s part of you.” Frankie said.

“No matter if you’ve lived here for one year or 25 years, it becomes part of you, and when somebody tries to attack Manchester, you feel you have to join together with everybody else to stand up against that.

“Terrorist attacks are happening all over the world, but nobody comes together like they have in Manchester. It’s a night of solidarity.”

“I’ve always had a personal connection to Manchester’s music, and my partner went to uni here,” Jay said.

“When the attack happened we weren’t personally hurt by it but we felt connected to it in some way, and Manchester has that resonance beyond its borders. People feel an affinity to Manchester when they’re not even from here.”

Someone who was hurt more personally by the attack was Oscar from Haslingden. He is a friend of the family of Olivia Campbell, a 15-year-old girl who was killed in the attack.

This event was a fitting way to reopen Manchester Arena, with great music from all acts involved. But the night wasn’t really about the music. It was about the people and the city. And what better way to show terrorists that they will never win but for the people to come together strong, united and defiant.

Profits from the gig are raising money for the Manchester Memorial Fund.