Wheels in motion for new cycle and walkway in Middleton 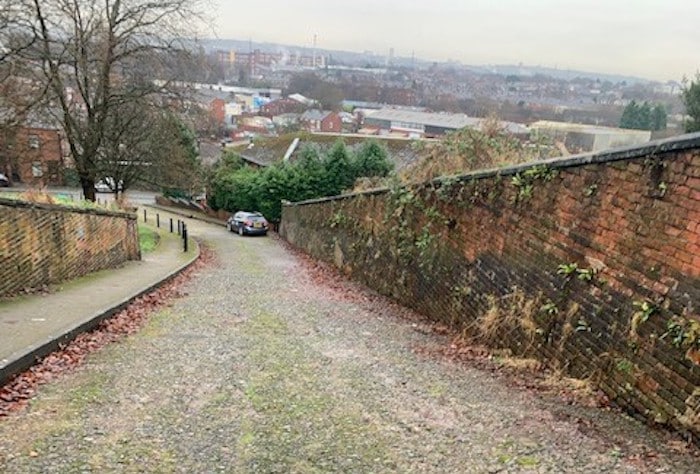 A project to create a brand new cycling and walking facility in the Middleton conservation area has moved up a gear, with work now underway.

The scheme, in St Leonard’s Street, will see almost a quarter of a million pounds invested in the area, with brand new paving being installed, to create a new cycling and walking route from Morton Street, past the historic St Leonard’s Church, through to Long Street.

The £220,000 scheme, which has been funded by Transport for Greater Manchester, will also see the installation of bollards at each end of the scheme to prevent cars from travelling through.

The project has been warmly welcomed by local councillors, who worked with the council’s highways team to bring the investment into the area, as well as the Friends of Jubilee Park and the team at St Leonard’s Church.

Work, which is now underway, will see the existing road made level with the pavements, to create a completely flat, easy to navigate area, which will also have an anti-skid surface.

The first layer of cycleway has already been laid, but the finished product will look very different.

It will have a golden, sandy colour which has been approved by conservation specialists as being in keeping with the heritage look of the wider area.

The scheme is expected to be complete by the end of February.

“This is not a through route, so it’s not commonly used by traffic, but its current surface means it’s also difficult to navigate on foot or bike, so it’s not currently serving the residents in this area well,” said local councillor, Kallum Nolan.

“Unfortunately, this area has also been blighted with fly tipping and has seen a number of thefts of the old York stone flags in recent months, so we expect that blocking off the traffic will significantly alleviate these issues.

“By working with TfGM to create this fantastic new scheme, we will create a lovely walking and cycling route, which will take people close to some of Middleton’s most picturesque heritage areas, including Jubilee Park, St Leonard’s Church and Long Street, with its historic Methodist School.”

The scheme is the latest investment into Middleton, which has also benefitted from the multi-million pound regeneration of many of its historic sites in recent years, including a series of properties designed by the late architect Edgar Wood, the exedra in Jubilee Park, the Sam Bamford monument and the Long Street Methodist School.

“In three weeks, when the next surface is laid, it’ll be a fabulous asset to Middleton.”

Simon Bennett, from the friends of Jubilee Park, said:  “We’re encouraged to see this work in this historic part of the town and greatly appreciate Councillor Nolan and everyone who has worked on this project.

“We can’t wait to see the finished product, which will really enhance Jubilee Park and St Leonard’s Church.”