Move over Madchester: Galchester celebrates the creative women of Manchester

Galchester is no ordinary magazine. It’s a colourful, book-sized publication by Manchester-born student Rebecca Burgum packed with photographs, interviews and articles exploring the contribution past and present that women have made to the creativity of the city.

The product of Rebecca’s final year project at Central St Martin’s College in London, it asks the question: why is Manchester so male?

The question is initially asked in response to the controversial Last Supper style painting by Nomad Clan that was unveiled as part of the 20 Stories restaurant launch in Manchester earlier this year.

The painting was intended to showcase famous local and adopted Mancunians – but only featured three women.

According to Rebecca, this is a symptom of Manchester’s ongoing identity crisis – an obsession with Madchester, masculinity and the past, something which artist Evie O’Connor described as “a noose round the neck of Manchester culture.”

Galchester is a welcome breath of fresh air. No nods to nostalgia here. The magazine is bold, bright and innovative – and even has augmented reality built in.

Some pages contain a little bee symbol designed by Manchester Art Gallery beekeeper Amber Sanchez which you can scan with a smartphone to add extra interactivity. For example, you can listen to a track by a female musician in one article.

The worker bee isn’t just an iconic symbol of Manchester, writes Rebecca, but also a fitting symbol for women’s determination. Worker bees are female. Aerodynamically speaking, they shouldn’t be able to fly – yet they can. Bees defy laws of nature just as women have defied male convention.

Galchester goes onto explore this in three big sections: fashion, art and music.
It’s a journey through history. 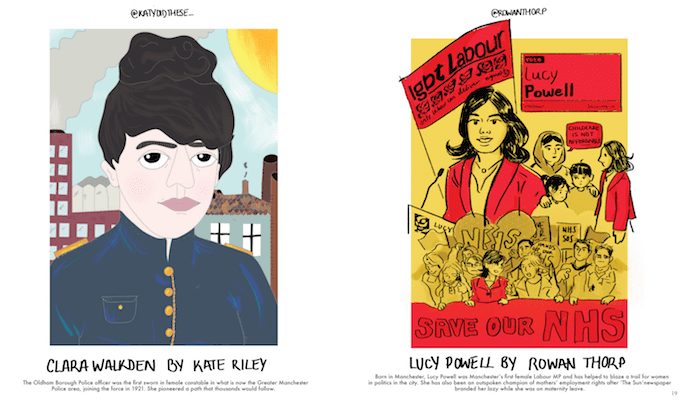 There’s a tribute to Clara Walkden who, in 1921, became the first female police officer in the Greater Manchester area, and Marie Stopes, who opened the first ever birth control clinic. And the chapter on The Pankhurst Pilgrimage is more relevant now than ever.

Unlike a lot of photo-mags out there, it’s crammed with fascinating facts and in-depth interviews with women who are working in and around the city right now, like Moss Side-born Erinma Bell, an activist against gun violence who has been given an MBE for her work and has her own statue in the Town Hall. It’s the first ever sculpture of a woman in the building.

There are interviews with Stockport-born photographer Lauren Maccabee, one-woman online fashion brand creator Meme Gold, whose designs have been worn by IAMDDB, and  Manchester School of Art graduate Meghan Smith.

Olivia Louise talks about life as an R&B songwriter and mother while also revealing some eye-opening statistics: eight out of ten top festival slots are given to male acts, and only 16 percent of songwriters and composers signed to record labels are female. 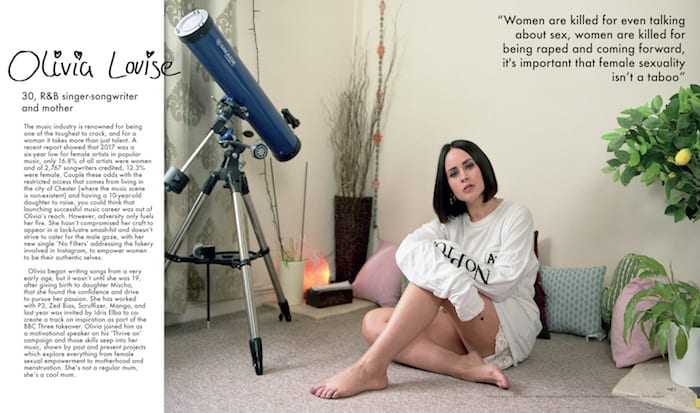 The interview content is extensive and varied, including a powerful piece featuring 64-year-old Linder Sterling, a well-known figure on the Manchester punk scene famed for her collages displaying how the female body is objectified. One of her pieces was the cover for the 1977 Orgasm Addict Buzzcocks single sleeve.

Linder tells Galchester about her work as a “cultural post mortem” and a near-death experience in which another woman told her to “be angry”.

Galchester is also punctuated with artwork and features such as Made in Manchester which looks at the women behind businesses such as Boohoo.

A little more long-read content to break up the interviews further would have been a welcome addition – perhaps on theatre, a creative industry thriving in the city and featuring many influential women as highlighted in the upcoming Greater Manchester Fringe.

Or perhaps more on women in the music industry, as highlighted in the recent Suffragette City photography exhibition at The Refuge curated by Alison Surtees (who has also contributed some words to Galchester).

It’s clear that Galchester has what it takes to be an ongoing project and these are all subjects for future issues.

Rebecca’s objective is to “provide an insight into how these women achieved their current positions, so as to inspire young girls aged 16-26 to get into the arts.”

Galchester is more than that. It’s food for thought for everyone. And it’s available at Manchester Art Gallery.