Mike Leigh on Peterloo: “It would have been an insult to serious northern actors not to have them in it” 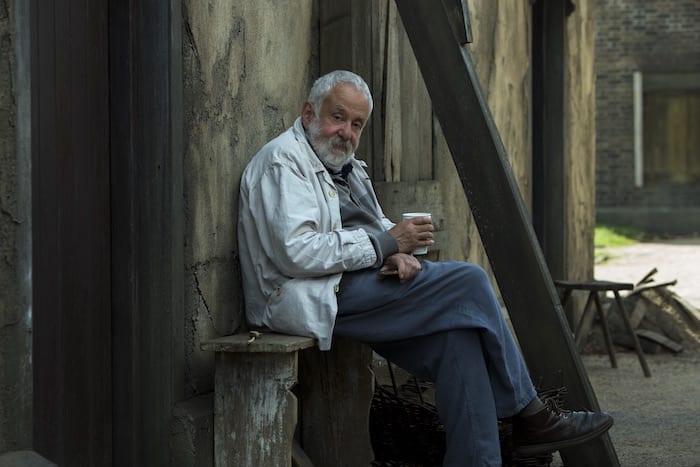 Set in Manchester in 1819, Mike Leigh’s new film details the events that led to the Peterloo Massacre in St Peter’s Field, Manchester, when cavalry charged into a crowd of 60,000–80,000 who had gathered to demand the reform of parliamentary representation.

It was important for Manchester to host the premiere, because, as Leigh points out, “there’s no doubt whatever that people would have tramped right past that spot, where HOME is” on the day of the massacre. So how did the screening come about?

“That was the brainwave of the distributors,” says Leigh. “They put it to the London Film Festival, who thought it was a great idea. I think it’s great – it’s unprecedented, and it’ll be a gas.”

A native of Salford, it seems reasonable to assume that Leigh had been wanting to make a film of the Peterloo Massacre for a long time. However, that’s not entirely the case.

“Here’s the weird thing about growing up in Manchester and Salford,” he says. “We didn’t really know about it. I mean, where I lived, in Great Cheetham Street, you could get down to where it happened in quarter of an hour on the bus, but nobody ever mentioned it, nobody walked us round and said it happened here.

“The only time I ever heard about it growing up in Manchester was for five seconds in O Level history, in with the Cato Street Conspiracy and stuff.”

Even when Leigh did eventually learn about the massacre, it didn’t immediately occur to the him that he would make a film about it.

“I did read a book about it, quite a long time ago, and remember thinking someone could do a film about this. Because at that time, I would never have contemplated that I would ever make a period film, long before I made Topsy-Turvy.

“But once I’d made Mr Turner, it suddenly dawned on me, really. I picked up that the bicentenary was next year and I just thought about it and then it seemed kind of inevitable, really. But I have to own up and say it’s not a kind of long festering passion or a long smouldering thing, because it isn’t.”

However, that’s not to say that Leigh didn’t have a personal connection.

“All the locations, it’s full of places that have huge resonance for me growing up. The Midland Hotel; Central Library – I spent a lot of time there because the Library Theatre, which was the local rep, was very important. The Free Trade Hall – I mean goodness knows what I didn’t see at the Free Trade Hall, classical concerts, jazz, folk, Bertrand Russell in 1957, the beginning of CND, Tom Lehrer.

“So in that sense, you think, f**k, this all happened here, and I never knew about it.”

When it came to shooting the massacre sequence, Leigh was keen to shoot in Manchester as much as possible. But that proved harder than expected.

“The biggest problem before we cracked it was where the hell to shoot it, because we sure as hell weren’t going to shoot it where it happened,” he says.

“Buxton’s House, where the magistrates are, is where the Midland Hotel is. The hill behind that was where they built Central Station. The back corner of the Radisson Hotel and Free Trade Hall is where the hustings were. The Friends Meeting House, the wall alongside it, which is still the same wall, was where people were squished in by the horsemen.

“Eventually we shot it at the Fort at Tilbury, which is rather further away from where we expected to shoot it than we had anticipated.”

How much of the film is historically accurate and how much is artistic licence?

“The first premise is it’s about what happened,” he says. “The job was to research it thoroughly and distil that into a film. It’s not a documentary, and obviously it details a great deal of what happens that is arrived at creatively.

“For example, we know in general terms what the magistrates got up to and what motivated them and what the result was and all the rest of it. Obviously we don’t know actually what happened word for word in detail. Of those 13 magistrates, four or five of them are based on actual known people and the rest we’ve invented in a very informed way from the research.

“As with all these things, the detail of what happens in the moment, who says what and all that kind of stuff, is obviously an invention, but it’s there to activate an interpretation of what we understand actually happened.”

As for the research itself, there were some unexpected sources.

“There’s an audio episode of Doctor Who which includes the Peterloo Massacre. Doctor Who goes back to 1819 and he’s at a farm somewhere outside Manchester. They’re talking about this thing, saying we should all go, people are gathering and Doctor Who suddenly says, ‘Wait a minute, what’s the date?’ ‘Today’s 16th August’, ’16th August – no, don’t go!’ So we found that quite an amusing resource to have when we were preparing the film.”

When it came to the casting, Leigh was understandably keen to cast northern actors.

“We had some pretty amazing actors – which means not only actors that can act, but are intelligent and committed and character actors. And, of course, it was a great opportunity to get a lot of northern actors involved, who don’t necessarily get to be in feature films. I mean, nobody in the film who plays a northern character isn’t northern.

“When I auditioned people,” he continues, “they came in their droves because everyone was up for it. It simply would have been, apart from anything else, an insult to serious northern actors not to have them in it. It wasn’t so much a matter of principle or otherwise, it just was the natural thing to do.”

What are his memories of growing up in Salford?

“When I was a kid, across the road was St James’ Church – it’s still there. And in that weird way that happened in World War II, they’d taken the bells away to be melted. So on a Sunday morning, when we were having our breakfast, the church used to play a record of the church bells at St Ann’s Church, in Manchester and the record had a crack in it. So Sunday morning it was ‘dan-dan-dan-BEDUNG, dan-dan-dan-BETUNG’.

“This was Manchester before the Clean Air Act. All the buildings were black. I was astonished in later years to discover that they were all built in this beautiful Portland Stone. The Town Hall, which is one of the great buildings in the world, was black.”

As to whether the film has any relevance to today’s society, Leigh reflects:

“I think if you put all those people in a time machine and they got out here, they would be horrified at the fact that people have the vote and don’t use it, that people have education but don’t take it seriously, or abuse it.

“And that the democratic process would happen and people would vote in a state of abject ignorance, motivated as much by paranoia. Now, it’s not the first time in history that that’s happened, but these are reflections that I’m having.”

What does he hope audiences will take away from the film?

“A film can only have any meaning to an audience in terms of the way the audience relates it to their own lives and experiences, and I think people will have a lot to reflect about.

“All I can say is that I hope I make films that, and this film is no exception, give people stuff to go away and reflect and ponder and argue about and think about and take seriously.”

Peterloo receives its UK premiere at HOME in Manchester on Wednesday, as part of the London Film Festival.