MIF17 comes to a close at HOME with Engels 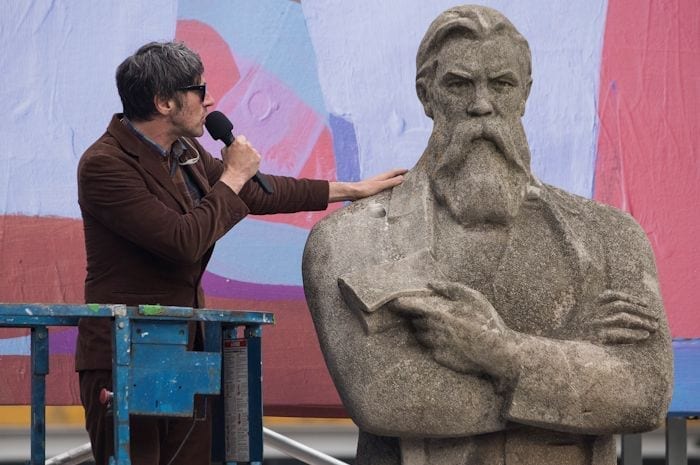 A huge statue of Friedrich Engels was unveiled at Tony Wilson Place yesterday evening in a live film screening and mass participation event which brought this year’s Manchester International Festival 2017 to a close.

Ceremony was a product of Phil Collins’ year-long festival residency. The statue had travelled all the way from the Ukraine as part of his work to show the similarities between Engels’ experience of 19th century Manchester and our lives today.

The film of the statue’s journey, which was shown in the NCP car park close to Bridgewater Hall and attracted an audience of thousands, featured an introduction by Maxine Peakemixed with interactive elements, live footage from across the city, and snapshots of real working lives encountered by Collins on his project.

It was accompanied by a soundtrack which included a song from Gruff Rhys of Super Furry Animals.

The audience was then invited to take a look at the statue which was unveiled outside HOME on Tony Wilson Place, followed by a party on First Street. 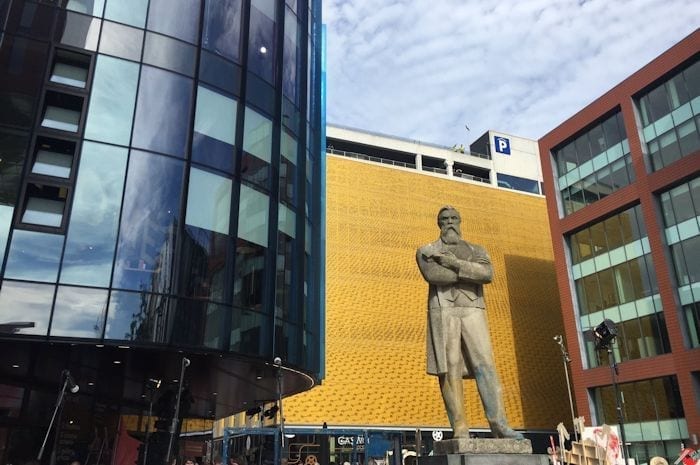 But why Engels? Born in Germany in 1820, at the age of 22 he was sent by his parents to Manchester to work in the office of Victoria Mill in Weaste, part of the family firm – an experience they hoped would rid him of his liberal views.

It was through Burns that Engels got to know the poorer neighbourhoods of Manchester and Salford, including places like Angel Meadow, recording the appalling conditions in which people were living in The Condition of the Working Class in England.

Engels travelled to and from Manchester for over 20 years, with Karl Marx coming to visit him a number of times. They stayed at addresses near Strangeways and Moss Side and worked together in Chetham’s Library.

Ceremony paid tribute to Engels and highlighted work being done by local charities to help those in need in the city now.

The combination of the statue’s journey, snapshots of Engels’ real life and interactive footage made Ceremony one of the most memorable events of this year’s Manchester International Festival, which has included a number of commissions of cutting edge culture under new artistic director John McGrath.

Ceremony was commissioned by MIF with 14-18 NOW and HOME.

Find out more about Engels’ life in Manchester and Salford at the Working Class Movement Library.