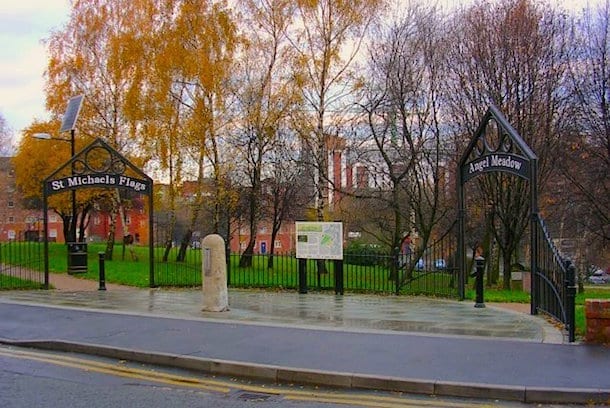 Angel Meadow may be home to the Co-operative Group’s new HQ and plenty of swanky flats but in the 19th century it was known as ‘hell on earth’. The lives of those who lived in Angel Meadow have now been explored in a new book 'Angel Meadow - Victorian Britain’s Most Savage Slum' which brings to life the stories of the slum’s dwellers, says Kaleigh Watterson
Share
Tweet
Share
Chat

If you walk through the small park in Angel Meadow you’d probably never guess that it hides a dark secret. Buried beneath your feet are thousands and thousands of bodies – the site was a mass burial ground for the people who lived in the surrounding slums. It’s just part of the macabre history of an area once known as Victorian Britain’s most savage slum, which has now been explored in ‘Angel Meadow: Victorian Britain’s Most Savage Slum’ a new book by Mancunian Dean Kirby.

Angel Meadow, the area bordered by Rochdale Road, Miller Street and the River Irk, was once home to 30,000 people packed into unsanitary slum housing in less than a square mile of space. It housed families struggling to make a living alongside more seedier elements of society including criminals, gangs and prostitutes who lived in cramped cellars, back-to-back terraces and damp lodging houses.

The stories of the people who lived in the area were well documented by visiting journalists and, most famously, Friedrich Engels explored the slums and featured it in his 1845 book ‘The Condition of the Working Class in England’ where he described it as ‘hell on earth’.

Dean is a journalist by profession, but became interested in the history of Angel Meadow after finding out one of his ancestors lived in the area. In February 2012, archaeologists discovered the home of his relative and Dean was invited to visit the site. This sparked the idea of telling the stories of the people in Angel Meadow and he began the four-year journey to work on the book.

But Angel Meadow wasn’t always an area of despair and desperation. During the Elizabethan period, Angel Meadow was known for its eels which were said to be the largest in the whole of England. It became occupied by wealthy merchants and tradesmen but as Manchester grew, the area fell out of favour as those who could afford it moved further afield. Poor quality houses were built up between every available space which led to the overcrowding and onset of slum conditions. The addition of the paupers’ cemetery also contributed to the downfall of the area.

The tales of the lives of the slum’s residents are often difficult reading. Many of those who lived in the area ended up living in cellars – with some of them up to 15ft below ground level. If a home was unfortunate enough to be located next to a privy, waste would come down the walls. It’s hard to imagine today that it’s the same area which now houses the headquarters of one Manchester’s biggest employers, a lush park and modern apartments.

Old photographs taken by those who documented the site, many still held by Manchester Archives at Manchester Central Library, can still be matched up to some of the area’s landmarks today. For example, the current home of Blackjack Brewery was formerly the site of houses and privies and the area behind the Marble Arch Inn on Rochdale Road was the gasworks.

The slum was recommended for demolition under the 1930 Slum Clearance Act, but it was World War Two that really had the biggest impact on forcing its removal – it was heavily bombed and many homes in Angel Meadow were destroyed, although some families did continue to live in the area until the final clearances in the 1960s.

Kirby’s book is a challenging read in places with the desolate lifestyles of those living in the area at points being difficult to fathom. It has a focus on the real stories of the real people who resided in Angel Meadow and brings the area to life. Mobs, riots and crime are juxtaposed with the issues impacting day-to-day life including tales of disease, death and awful housing conditions. However, as the area has began to come to life again and more and more people are moving into the modern housing which has replaced the back-to-back terraces, ‘Angel Meadow: Victorian Britain’s Most Savage Slum’ demonstrates just how far the area, and the wider city, has come.