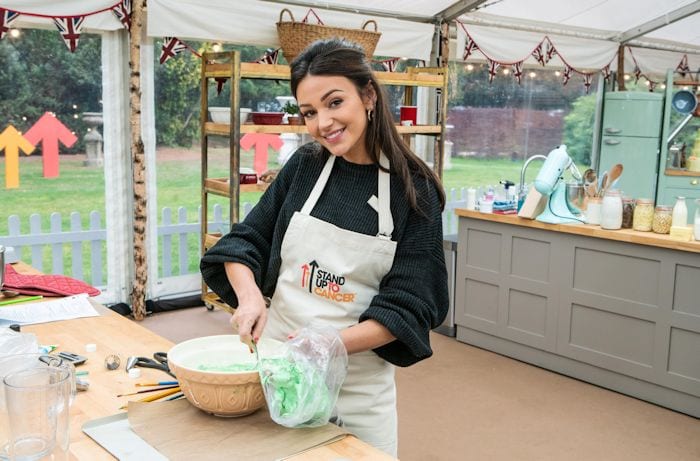 Next week, it’s time for a new batch of familiar faces to take their turn in the famous white tent. One of those burgeoning bakers will be Manchester’s very own Michelle Keegan.

The actress, who’s starred in Ordinary Lies, Tina and Bobby and Our Girl since leaving Coronation Street in 2014, will battle it out alongside comedian James Acaster, actor Russell Tovey and TV presenter Rylan Clark-Neal in a bid to raise lots of money for Stand Up To Cancer. 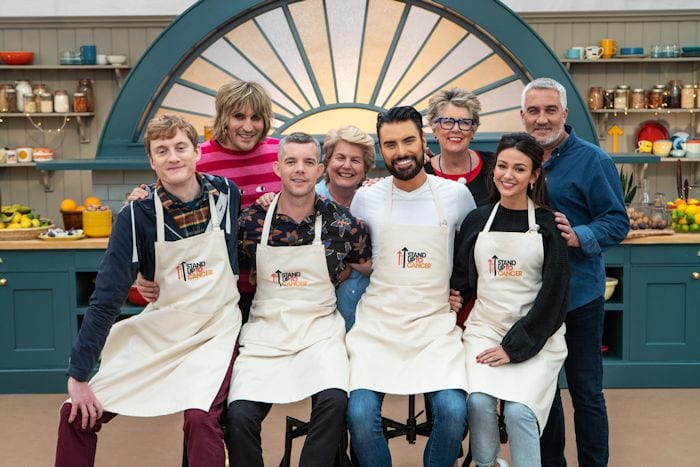 They’ll face three tough challenges set by judges Prue Leith and Paul Hollywood – topped flapjacks, a testing technical and their happy places made from meringue for the showstopper round – before Noel Fielding and Sandi Toksvig announce the winner.

Michelle took time out from the tent to talk signature dishes, soggy bottoms and the chances of her being named star baker before her appearance on March 12th.

Would you say you can bake?

No. I can cook but I think cooking and baking are completely different things. I’m very confident in the kitchen when it comes to lunches and dinners, but I’m not confident when it comes to baking. But I’m a massive fan of the show so I thought it would be a great challenge.

Who taught you to cook?

My mum, she’s a really good cook. She was our school cook in primary school as well.  She was always cooking and in the kitchen, so I’ve always been interested in it through her.

Do you have a signature dish?

Cooking-wise, I like doing tapas dishes, because I like picky food. My signature dish would be gambas al pil pil – garlic chilli prawns. So good!

Have you had any baking disasters?

Yes, the first time I made flapjacks it was like granola. I forgot to put the sugar in. I went through hours of mixing it and making it then I went to cut into it, and it fell apart.

Who do you want to impress the most in the tent?

All of them. I can’t pick out any of them in particular. I want to impress them all.

What’s your strength in baking?

Definitely not timing. I’d say that’s my weakness in baking. I’m quite good at following instructions.

Did you practice your bakes ahead of the big day?

I practiced the flapjack a few times, the technical I have no idea what I’m doing and I’ve practiced the meringue once. It went alright actually considering I’ve never made meringue before.

Are you more likely to get a Hollywood handshake or a soggy bottom?

Do you want to be star baker?

I’m not competitive, but I do want to do well in it and not come last. As long as I’m average or above average, I’ll be happy with that. I don’t need to be star baker.

Do you consider yourself cool under pressure?

No, I’m not at all good under pressure, but I’m excited for it.  This morning I was really nervous, but I had such a good time, and such a laugh, I can’t wait now for the next one, it was so much fun.

Are you a traditionalist or do you like experimenting with food?

I like traditional stuff, I think. I like to keep things simple. When I try to experiment it doesn’t go well. Don’t try and fix what’s not broken.  My dad cooks beef in Guinness.  I don’t know why he does that. He adds chocolate to his spaghetti bolognese too. I’m scared about doing that. It would be like chocolate bolognese if I did it.

If you were a baked good what would you be?

I’d say an Eccles cake, only because I went to school in Eccles, and I grew up in a town next to Eccles, and Eccles cakes are my grandad’s favourite.

Why are you supporting Stand Up To Cancer?

A lot of people are affected by cancer. I certainly am. My friend got cancer this year and she’s in remission now. Seeing someone so close to you, go through it at such a young age as well, makes you realise how important these charities are, and funding and stuff. For me it was very important to get involved.

The Great Celebrity Bake Off for Stand Up To Cancer continues on Tuesday, March 12th on Channel 4