Manchester city centre’s first new public park in more than 100 years, Mayfield Park, has now officially opened to the public today (Thursday, 22nd September 2022), transforming an area of the city that once gave birth to the industrial revolution into a lush, green urban oasis.

Over the last 18 months the vast and mostly derelict, former industrial site next to Piccadilly Station has been transformed into a stunning, accessible and varied green space for all to enjoy.

Mayfield Park’s main entrance on Baring Street is open from dawn until dusk, seven days a week – which is in line with all other parks in the city – providing local residents, visitors and communities across Manchester with a city centre oasis of green space, over 140 trees and beautifully landscaped river walkways. 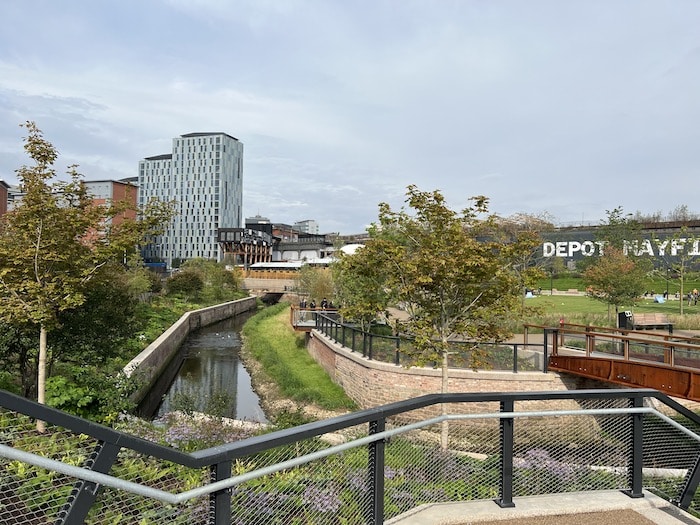 Located next to the city’s Piccadilly train station, Mayfield Park provides Manchester city centre with a family-friendly, inclusive greenspace with major ecological and sustainability benefits, in an area that was the epicentre of the British textiles industry during the Industrial Revolution.

What was once a thriving network of print and dye works, breweries and bathhouses is now home to diverse range of 120 mature and semi-mature trees, 120,000 plants and shrubs, a vast public lawn, tranquil riverside walkways and the city’s largest play area. With future phases of development due to start imminently, the project will see jobs, communities and economic development return to previously forgotten part of Manchester’s industrial heritage.

At the heart of the park is the River Medlock – one of Manchester’s three founding rivers – which after more than 50 years under a concrete covering has been restored as a haven for nature. It has already attracted Kingfishers, Brown Trout, ducks and Canadian geese to populate previously derelict industrial land.

The park was officially launched today by 100 local schoolchildren who were given the opportunity to try a series of health and wellbeing sessions, including yoga, football from Man City in the Community and mindfulness. 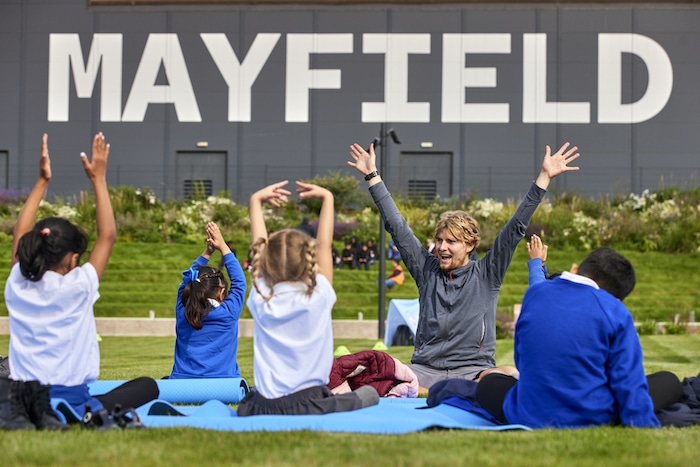 For young visitors to the park, the star attraction will be a huge new public play area, featuring crawl tunnels, elevated rope bridges, wheelchair accessible play equipment and an 18m-long slide which crosses the River Medlock. Formed around six chimney-shaped towers reaching 10-metres high, the play area was designed and built by a local company and inspired by the area’s industrial heritage. 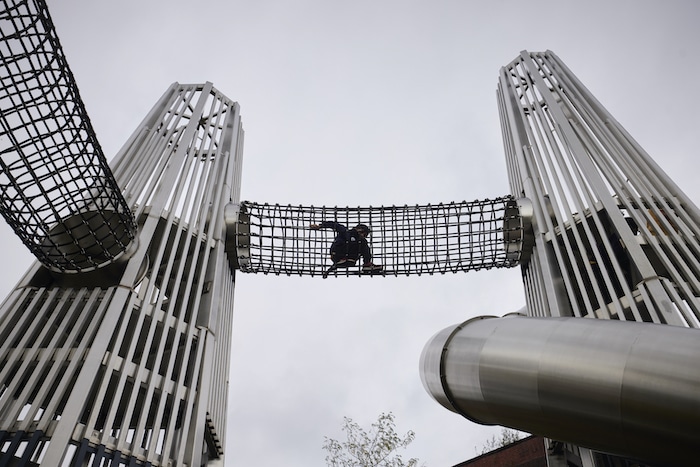 “A momentous day for Mayfield, and Manchester,” said Martyn Evans, Creative Director at U+I, the regeneration company leading the Mayfield development on behalf of the Mayfield Partnership.

“The greatest cities in the world offer a true blend of amazing culture, great architecture and green space. Manchester is one such city and Mayfield Park adds a significant piece of new, family-friendly, inclusive greenspace to the city centre. 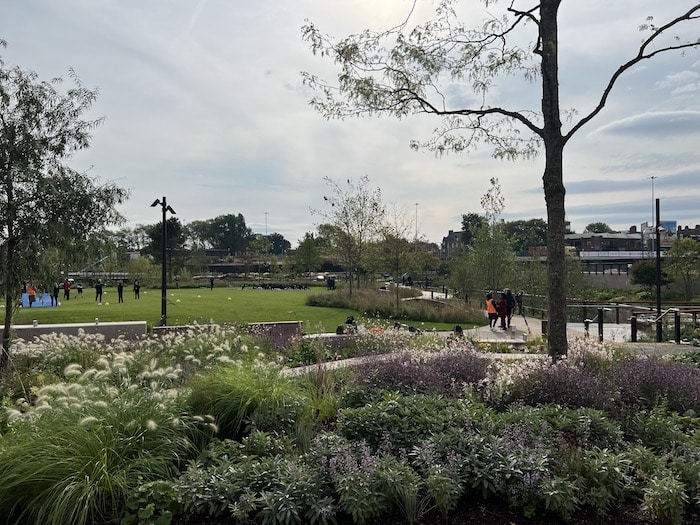 “It’s been a true team effort with our project team and our partners at Manchester City Council, Transport for Greater Manchester and LCR working closely with local building contractors PP O’Connor to deliver the park.

“We are incredibly proud of what we’ve achieved and we’re excited to welcome our first visitors on 22nd September.” 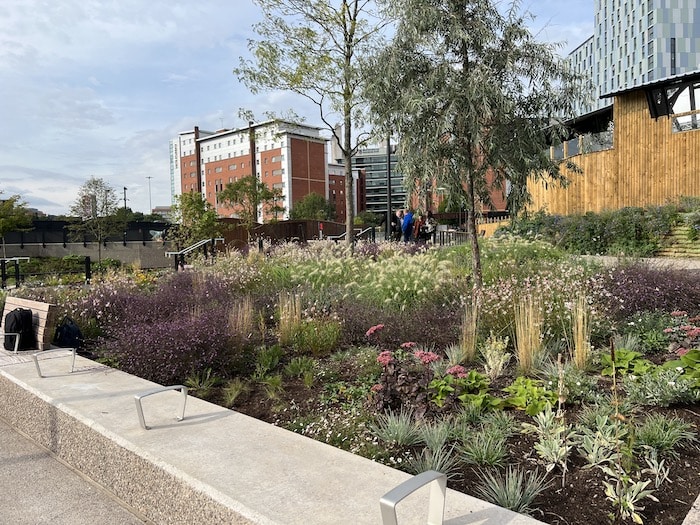 Cllr Bev Craig, Leader of Manchester City Council said: “To see Mayfield come to life today has been a wonderful experience. And to see the park go from visualisation to reality – and surpass our expectations – is a credit to the hard work that has gone into building and sculpting this former brownfield land into a world-class green space that this city, and local people, can be truly proud of.

“There are some projects that feel so momentous in the development story of our city that we look forward to them with great anticipation. Mayfield Park is one of those developments – a project that has true transformational potential for this part of our city. 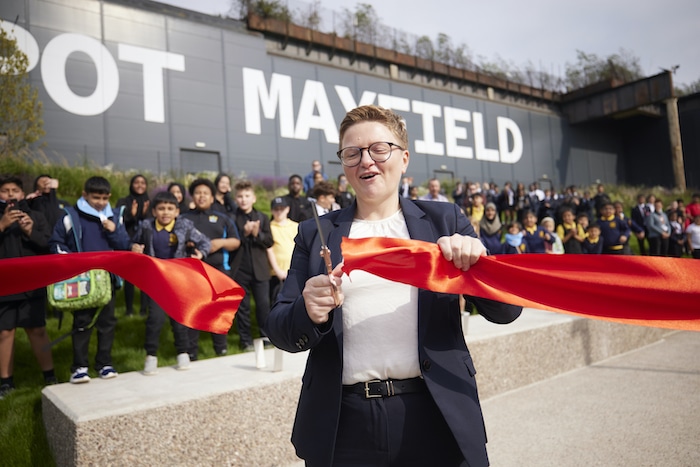 “It’s with excitement then that we can look ahead to the official opening of the city centre’s first public park in 100 years later this week. We know the massive health and well-being benefits that green spaces can have for our residents and increasing access to parks for our residents is a key priority for us. Mayfield will be a 6.5 acre oasis at the heart of our city. 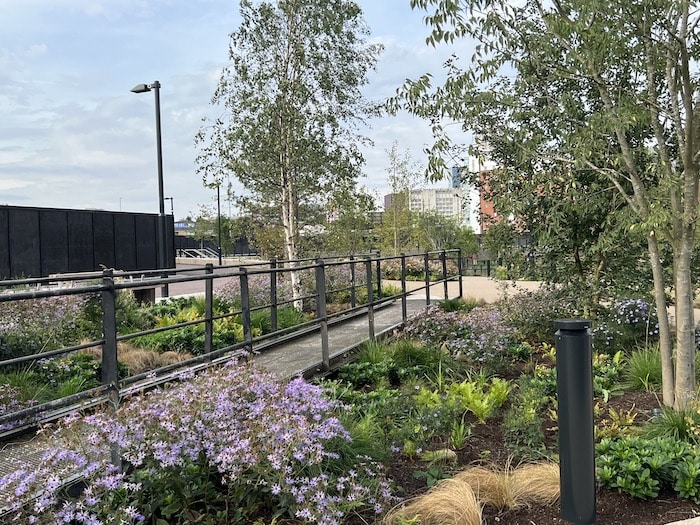 “Green investment is fundamental to our wider ambitions to improve air quality and underpins our work to strengthen Manchester’s resilience to climate change. Mayfield is a park first and foremost, but it is also a statement that development in the city can and should celebrate green spaces to become a focal point in our communities.

“Importantly, Mayfield also represents a significant economic boost for Manchester. The partnership has shopped local when procuring contractors to make sure that employment opportunities have benefited local companies and local people first. During the ongoing cost-of-living crisis, it’s this type of development that provides the jobs that our residents need – and makes sure Manchester people continue to share in the success of our city. 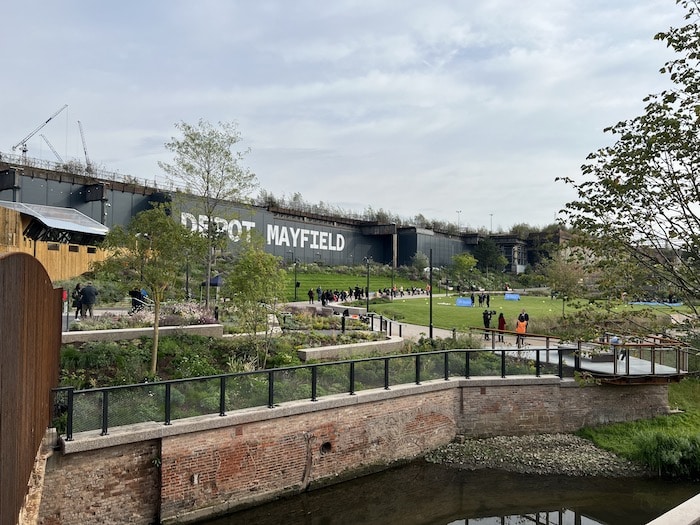 The Park has been more than six years in the planning, design and delivery. In 2020, the UK Government pledged £23m of investment from its Getting Building Fund – one of the largest investments in any single project – to Mayfield Park. This investment, delivered through the Greater Manchester Combined Authority (GMCA), is part of the Government’s strategy to support ‘shovel ready’ schemes that will help to drive economic recovery following the COVID-19 crisis.