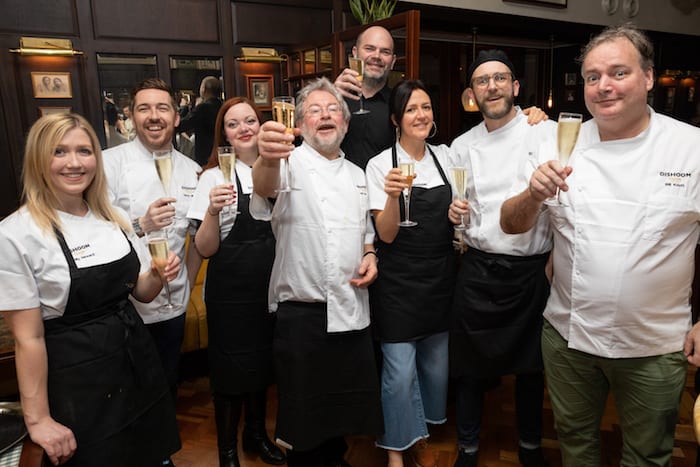 A highlight of the hospitality calendar, tickets sell like hot cakes, with the event raising money for Action Against Hunger, a global humanitarian organisation tackling the causes and effects of hunger.

This year, the event took place at new arrival Dishoom – and a team of food writers and critics from Manchester and national publications, including me on behalf of I Love MCR, raised over £22k for the charity.

Once again, the critics donned chef whites and worked alongside Dishoom’s kitchen team to prepare an exclusive dinner to be judged by some of the North’s top chefs and restaurateurs.

The daunting judging panel included  Adam Reid from The French, Mary Ellen McTague from The Creameries, Simon Wood from Wood Manchester, Stosie Madi from Parkers Arms, Steven Smith from The Freemasons at Wiswell, and Paul Askew from The Art School.

The critics were tasked with creating their own dishes for the event. Ruth Allen from Manchester Wire and Matt White from XS Manchester kicked off proceedings with Mancunian cheese on toast and crispy paneer with Kairi chutney, before the main courses.

I was joined on the grill, where I was cooking my twice marinated lamb chops, by Emily Heward from the Manchester Evening News who tackled tandoori prawns.

We also had to design a beer cocktail for the night, using a local brewery.

It was a tough day in the kitchen for the critics, faced with the intense heat and pressure of getting dinner out on time for 120 paying guests, but the feedback from the night was overwhelmingly positive.

Action Against Hunger runs life-saving programmes benefitting over 20 million people each year in 49 countries worldwide, and it was moving to hear some of the individual stories of how the charities have benefitted communities.

Caroline Dyer gave an impassioned speech about the charity and the work it does – and how all donations really do help save lives. And a series of live auctions on the night raised the total further.

Winners were announced at the end of the evening following votes from diners and chefs, with Neil taking the prize for chef’s choice as well as cocktail creation, and Ruth picking up the people’s choice.

The event has so far raised over £22k – which is still rising.