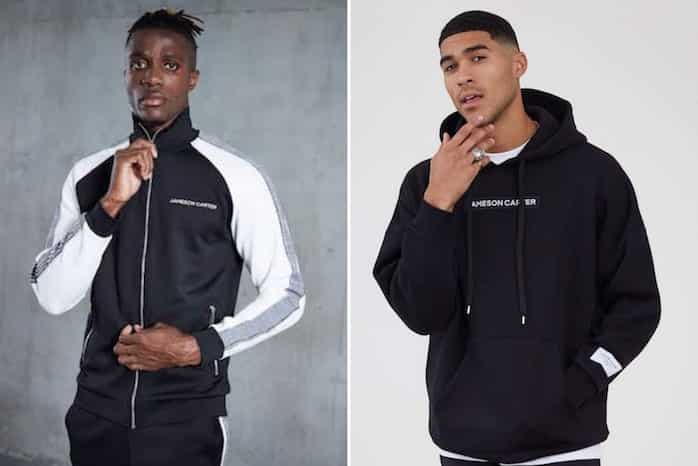 In just three years, Manchester brand Jameson Carter has gone from selling caps out of their bedrooms to shooting nationwide campaigns with international footballers.

Since launching in 2016, their clothes have been spotted on numerous reality stars from the likes of Love Island, TOWIE and Geordie Shore.

They have also just collaborated with Crystal Palace and Ivory Coast football ace Wilfried Zaha, who featured in their latest TV and national billboard campaign for JD Sports.

Having started with an initial investment of just £3,000, the company is now dominating the affordable streetwear market in the UK and is forecast to make £10million by 2021.

Jameson Carter’s success is in part due to the ability of its founders to harness the power of reality TV and social media for good.

Between them, partners and childhood friends Jonny Dawson, Mike Jukes, and Craig Tideswell have managed to use it to promote their affordable fashion brand to dizzying heights.

Their fashion brand was conceived in July 2016, coincidentally just a few weeks before the second season of Love Island aired on ITV.

On day 34, Mike’s brother Adam entered the villa – and so the lads kitted him out in their designs to make the most of the free promotion. Timing, it seems, is everything.

Their caps were a hit, and soon Adam’s fellow contestants Alex Bowen and Olivia Buckland were wearing them around the pool, too.

As a result, Jameson Carter sales began to soar – and soon other well-known reality stars began wearing the caps off the back of the promotion that the show brought the brand.

“People were seeing my brother wearing our caps and because I was controlling his Instagram I kept tagging our business account in his and people were messaging us asking where they could buy the products.”

As sales began to soar, the three partners were still working at their day jobs, doing retail shifts all day and then packing their own orders well into the early hours. It wasn’t unusual for them to be working 17 hour days.

“For nine months straight we would do a 9-6 shift, then from 7pm until 2am we would be packing orders and drive them to the post office first thing in the morning,” said Jonny.

“It was a total buzz for us because we knew we were getting bigger and bigger.”

Six months in, they were approached by Footasylum – who placed an order so big they had to move premises.

“We had finally got a warehouse and after two months we outgrew it because Footasylum came in with an order which was too big for the premises, so thankfully they let us use theirs,” said Craig.

This new deal with Footasylum also saw the brand expand beyond their signature caps as the retailer pushed them towards developing a full clothing line.

The following year saw them gain interest from another major retailer, JD Sports, leading to Jameson Carter being stock in 144 JD stores across the UK and Europe, and worldwide online.

This collaboration resulted in an 800 per cent increase in growth, a turnover of £2million and profit of £550,000 for the brand in just their second year of trading.

Even more impressive when you consider the three of them do pretty much everything themselves.

“We’ve not got 25 members of staff like you would expect for a company of this size.

“We share our warehouse in Derby with Ted Baker and there are 10 people who work on our contract to pick and pack our stock, as well as one employed member of staff who does our social media, videos, website etc,” says Jonny,

“The three of us do all the design, production, booking in and out and invoicing. We all do a bit of everything, ” adds Mike.

“We’ve had no other investment along the way, not even a single bank loan, so it’s all been very organic.

“For the first year we didn’t take a penny and every single bit of money we made we put back into buying product and marketing – that is why the company has been so successful.”

And after seeing a 50 per cent increase in sales compared with previous months thanks to the Zaha deal, they turned over nearly £4m in a six-month period between July and December 2019.

Now Dawson, Jukes and Tideswell are now planning to crack the US market with the brand going into 30 JD stores in America this year.

Seeing themselves as “a Calvin Klein/ Tommy Hilfiger” the partners hope that with the premium sound of the brand name and logo, they will become a household name around the globe.

They plan to hire more staff as they expand their womenswear collection and bring out lines of trainers, accessories, sunglasses and fragrances.

And looking long term, they also hope to open a flagship store in Manchester – and one in London too.,

“Our vision for the future is that we want to still be here in 10-15 years,” says Jonny.

“We aren’t just looking for a quick buck, we want to smash it in the US and internationally.”