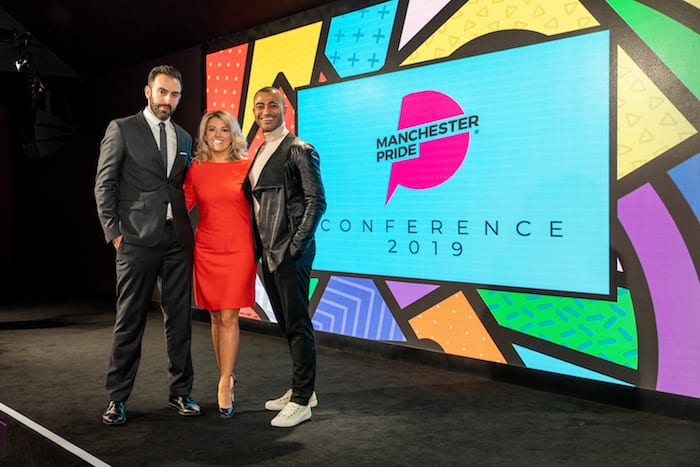 This week, Manchester Pride held its first LGBT+ conference to champion and challenge the vital work done by the city and set the agenda for the next 12 months.

Inspired by TED talks, the Manchester conference, which attracted over 200 attendees, featured a mixture of workshops, break-out sessions, panel discussions and Q&As.

The event aimed to bring together people from businesses and organisations across Greater Manchester to review and discuss the LGBT+ agenda for 2019, and featured some of the region’s champions of diversity as well as a keynote address from Peter Tatchell reflecting on the state of LGBT+ rights 50 years since the Stonewall riots.

Manchester Pride chief executive Mark Fletcher opened the event with an introduction to the Inclusion and Equality Charter.

A piece of work that the charity began two years ago, it is a commitment to rid Greater Manchester of inequality for LGBT+ people. It asks organisations to recognise that there is diversity amongst LGBT+ people and many differences in needs, aspirations and experiences of LGBT+ life.

“As an LGBT+ charity our work has evolved enormously over the past three years and we are constantly looking to how we promote equality and inclusion for LGBT+ people in Greater Manchester,” said Mark.

“We have a diverse programme of events and touchpoints now and some extremely experienced and committed partners.”

Discussions included Bringing Women into the Spotlight, discussing increasing opportunities for women, the challenges women face and their passion for gender equality; and Appealing to LGBT+ Audiences in Culture, discussing the challenges faced by theatres, curators and arts individuals to ensure their work reaches new LGBT+ audiences.

Trans Creative director Kate O’Donnell, whose project Transing Up Manchester works with venues to help them improve their trans awareness and be a more trans positive place to visit, explored the ways corporations, cultural organisations and individuals can become more trans aware.

And a discussion called Implementation Strategies: LGBT+ equality in the workplace looked at how Barclays, Thomas Cook Airlines and Co-Op have implemented strategies and safeguarding for their LGBT+ employees to promote diversity and inclusion.

“You have to be really authentic,” said Amy Stanning, former co-chair of Spectrum Barclays LGBTQ+ colleague network, who stressed the importance of everyone knowing their voice is heard.

“But you cannot be what you can’t see. LGBT leaders have a duty as role models.”

The panel also stressed the importance of having allies in the workplace, with Andrew Sanderson of Thomas Cook Airlines saying that thinking about diversity and inclusion needs to happen within every stage of business plans, including marketing campaigns.

Why should promotional images of a family on holiday always seem to show a white heterosexual man and woman with two children? he asked.

Peter Tatchell, who has campaigned for LGBT and other human rights for 52 years and spearheaded the successful campaign for same sex marriage, delivered the keynote speech, reflecting on the progress that has been made as well as the work still to be done.

“The Pride flag is one of most recognisable flags in the world today,” he said. “We’ve gone from being one of most backward countries to one of most progressive.

“But we’ve had to fight for it. It’s been a collective effort. We’ve done it together, with our straight friends and allies.”

It’s unfinished business, he said, reflecting on the inequalities and issues still to be resolved, from marriage laws not being equal and pension discrimination when a same sex partners dies to schoolyard bullying and trans discrimination.

But Peter was optimistic about how things can change, especially through educating younger generations.

“Babies are not born prejudiced,” he said. “That’s learned behaviour. But the good news is, we can see that education works.”