Manchester is hardly short of Greggs fans, but one has set himself miles above the others – and we couldn’t love him any more.

Local superfan Isaac Brooks has his own Instagram account reviewing Greggs products, where you can find him dissecting everything from the classic sausage roll to pink jammie doughnuts and pizza slices.

He has been running the page for over a year, with his first post dating back to February 2018.

Since setting it up, he’s been posting frequent reviews to let his followers know which pasties and bakes are the best – as well as which branches to get them from in the warmest condition.

As well as highlighting the cheapest Manchester Greggs stores and penning lengthy, in-depth reviews spanning the highs and lows of his experiences, he also shares funny Greggs-related memes.

He describes himself as “the world’s number one fan of sausage rolls” and we think he may well be right.

They certainly feature prominently on his grid, making up 52% of all Greggs-related posts, to be exact (yes, we counted).

So – the burning question for all sausage roll fans – what did he make of the controversial vegan roll that upset Piers Morgan so much?

“The VSRs are actually quite long, longer than the proper rolls, so I guess that makes up for the fact that a VSR costs 5p more. And the pastry is rather peculiar and is unlike any other pastry designs which you see in Greggs products,” he comments.

“It was however very nice pastry; the weird design gave an interesting texture with every bite.”

28/1/19 You waited, I delivered. The vegan sausage roll review is finally here. After spending weeks looking in greggs to see if i could find one to try, i finally found some in the local greggs and as a true connoisseur i knew it was my duty to get one, despite my reservation that only a proper sausage roll should be served in Greggs. The VSRs are actually quite long, longer than the proper rolls, so i guess that makes up for the fact that a VSR costs 5p more. Also the pastry is rather peculiar, and is unlike any other pastry designs which you see in Greggs products. It was however very nice pastry; the weird design gave an interesting texture with every bite. Now obviously the crucial part of the VSR is the filling. It wasn’t bad. It tasted very similar to the OG roll because it used the same herbs and spices etc, but i could easily tell it wasn’t the real deal. I wasn’t impressed with the texture of the ‘sausage‘ either – it was weird and was definitely not like the proper sausage in a proper roll. In conclusion the vegan sausage roll is alright if you’re a veggie or vegan or muslim or whatever but it’s nowhere near as nice and it never will be. Stick with the real sausage rolls and bring back the beef chilli bake please 🙏🏼6/10 meh

On the account you’ll also find him tackling important Greggs-related questions like dry versus greasy pastry “i’m sure we can all agree that it’s better [being greasy] than being bone dry” and laying into any media doing his favourite Greggs products a disservice.

Reflecting sternly that the game ruins the rolls’ integrity and that eating them afterwards would be unhygienic, he goes on to denounce it as a “silly cheap thrill created by some bored contentless millennial journalists (if you could call them that).”

Harsh words. He certainly takes his Greggs seriously, does our Isaac.

right boys it’s been a long time since ive posted a video / meme / something that isn’t just a review and ive been tagged in this video by many fans today and i thought I’d put my humble opinion out there and see if you agree (you should). some people would see this as a simple fun game for people that like sausage rolls, but i see this as total disrespect, it’s just blasphemy. I can’t understand why anyone would think it to be acceptable to take amazing sausage rolls and stick them together with your hands on a table, contaminating them, then taking them out of the tower until they all fall and go all over the place. as well as the fact it’s just a bit grim there’s some physics in that the rolls towards the bottom would become damaged due to the weights of the other sausage rolls that they support, so not only would you end up with dirty sausage rolls you’d get squashed rolls with damaged pastry that wouldn’t be as nice as how they’d be when bought, so the sausage roll quality would rapidly decrease, all because of a silly cheap thrill created by some bored contentless milennial journalists (if you could call them that) at ladbible. peace out

Currently studying as an engineer’s apprentice, Isaac first started reviewing Greggs as a bit of a laugh with his mates.

Little did he know at the time it would lead to him being invited to open a brand new Greggs in the Trafford Centre.

But yesterday his superfan credentials were cemented, as he cut the official opening ribbon and got first in line for a sausage roll ahead of a lengthy queue. 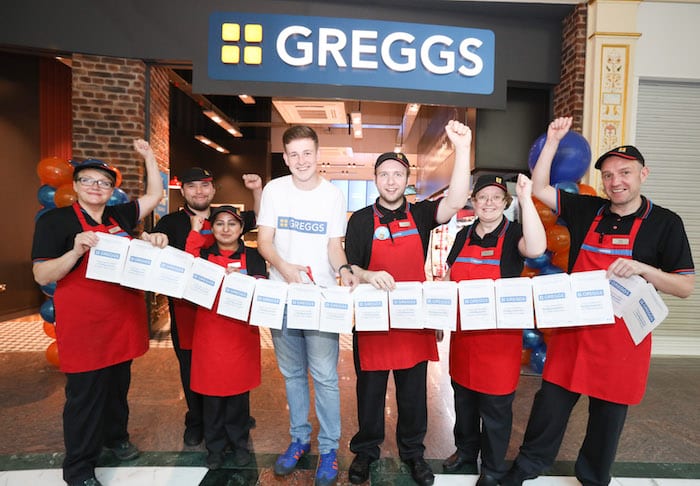 “As a genuine Greggs superfan, I was chuffed to have been picked to open the Trafford Centre’s first Greggs shop,” Isaac said.

“I started reviewing Greggs in February last year as a bit of a laugh with my mates because I would always go to Greggs for lunch at college and then it took off from there.

“My favourite Greggs products would have to be the sausage rolls and the caramel custard doughnuts. I’ll definitely be getting a few of those with the winnings.”

You can keep up with more of Isaac’s Greggs adventures over on Instagram @isaacsgreggsadventures.