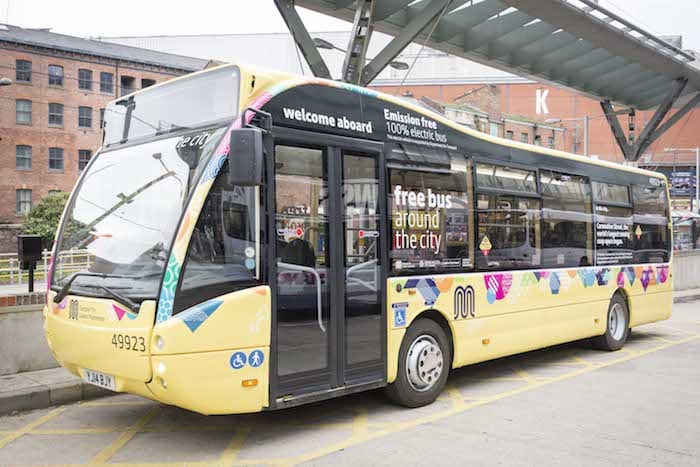 Manchester’s Free Bus city centre services are set to run until midnight for the first time when new timetables come into effect from the end of next month.

The changes will also see the re-introduction of a new Route 3 service which, from 27th October, will operate alongside Route 2 until midnight, providing links to transport interchanges from popular evening destinations including Deansgate Locks and the First Street venues including HOME.

Route 1, which runs from Piccadilly Station, though King Street, Cross Street, St Mary’s Gate and Deansgate, will also be extended to serve Salford Central train station in New Bailey Street and, during weekends, the Museum of Science and Industry and nearby Castlefield.

Greater Manchester Night Time Economy Adviser, Sacha Lord, said: “Since taking up the role, it has become very apparent that a solid transport system is key.

“Transport and connectivity across the whole of Greater Manchester has been identified within my blueprint as one of five key objectives. With that in mind, I am delighted to support the decision to extend the Manchester city centre Free Bus until midnight.

“Not only will this help the economy and help increase tourism, but it could also make the city centre safer for employees to travel.”

The changes, which were approved at a meeting of the Greater Manchester Transport Committee yesterday, will be introduced in response to passenger feedback. Those asked said that the current 10pm last service was too early and often did not correspond with major events in the city.

Passengers also requested that a morning link between Victoria and Spinningfields be re-introduced, a change that will also be reflected in amendments made to Route 2.

Councillor Mark Aldred, chair of the Transport for Greater Manchester Committee, said: “The Free Bus is an excellent service that connects many of Manchester’s most popular visitor attractions, so being able to run buses until midnight is a major boost for those enjoying all the city has to offer at night.

“In making these changes we’ve listened to feedback from our customers, so I’m hopeful this will encourage even more people to give bus or public transport in general a go – helping us to tackle congestion and air pollution in the city centre.” 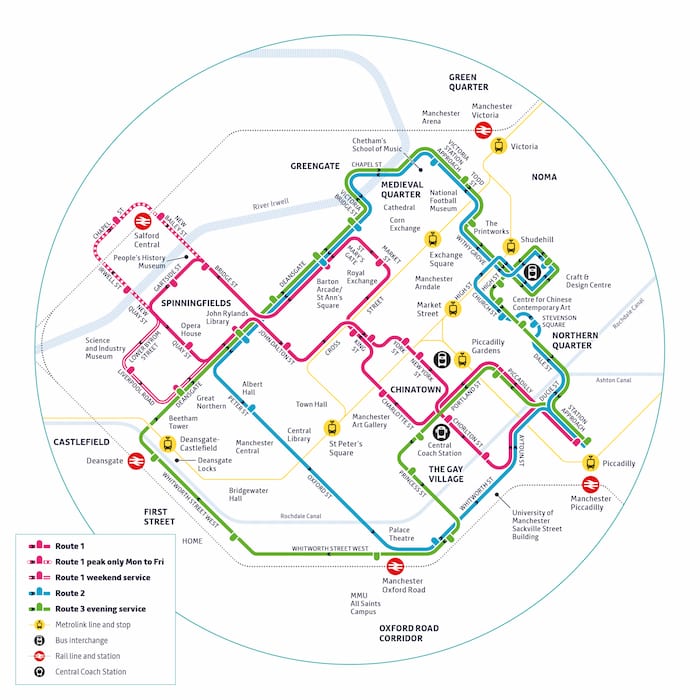 The revamped services will maintain the existing ten-minute frequency (12 minutes at weekends) and will continue to be operated by Go Northwest.

Councillor Angeliki Stogia, Executive Member for Environment, Transport and Planning for Manchester City Council, said: “Extending the Free Bus service is part of the push to make the city centre an easier place to get to, from and around by public transport and I’m sure it’s something which will be widely welcomed.

“Our city centre transport vision is about boosting public transport while also improving the experience of people travelling on foot or by bike as part of our commitment to Manchester becoming zero carbon by 2038. This free bus decision is another move in the right direction.”

Free Bus was launched in October 2018, replacing the previous Metroshuttle service. The buses were re-designed to make them more recognisable as they travel about the city centre.

All feature a notable fact about Manchester and a vibrant and colourful livery, with an abstract pattern that weaves in elements of Manchester’s rich heritage such as graphene, cotton, bees and music, amongst other things.

All buses also have audio-visual passenger information screens, providing audio and visual announcements on various aspects of the journey, such as the route plan and the next stop, as well as places of interest and nearby businesses.