Over the years, the space in which Piccadilly Gardens now stands has been many things.

Home to medieval water-filled clay pits, a manor house, a moat and a pond, then a grand lake, an infirmary and a mental asylum, it’s certainly got a varied and intriguing history.

Once little more than a stretch of wasteland filled with wet clay pits known as daub holes, in medieval times it was used as a place to publicly shame women considered a bit weird, loud or ‘witchy’.

They would be strapped to ‘ducking stools’ here, an exercise in public humiliation and entertainment, for such ‘crimes’ such as scolding or bearing a child whilst unmarried.

This would draw large crowds to watch, who were used to seeing public executions and punishments as entertainment. Today it’s still a place of shame for locals – albeit for different reasons entirely. 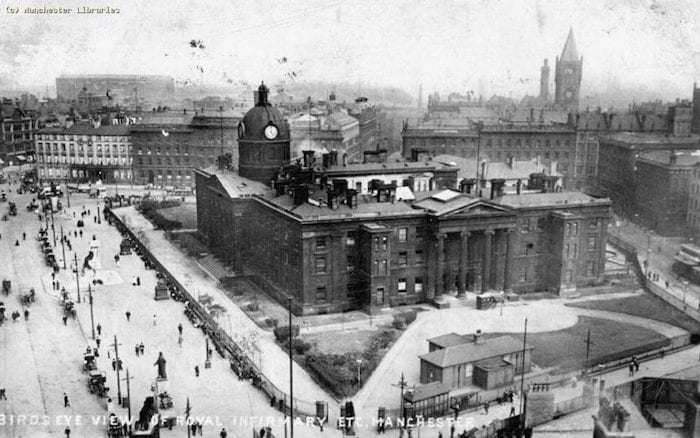 Later on, it housed the infirmary and then, also, a mental asylum. Many casualties from the Peterloo massacre were treated here – and interestingly it seems that staff at the infirmary had been warned that something was going to happen as some reports state they had cleared beds in preparation.

Prior to the hospital’s move up to Cheadle in 1849, however, there were some pretty wild plans floating about to build an Eiffel Tower-esque structure over the existing hospitals and then plonk another building on top.

Sadly, this never came to fruition. If it had, it certainly would’ve been one of the coolest buildings in the city. 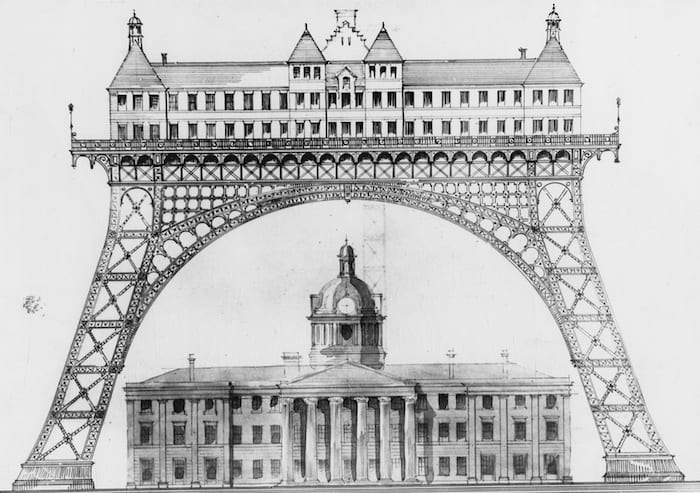 Today, the gardens are disliked and actively avoided by many locals.

Old photos still float around to remind us how it looked at its best, post redevelopment in 1914 with its sunken gardens that were once the hospital’s basement.

Prior to this, during the First World War, it held a marquee for the recuperation of wounded soldiers.

But the sunken gardens were undeniably its most popular incarnation.

In place from 1914 to 2003, at this time they offered visitors to Manchester a striking first impression with bright multicoloured flower beds and open edges, framing the regal period buildings that flank it on every side.

During the forties and fifties, it also housed allotments – something we expect, given the number of urban gardeners with tiny, overflowing balconies, would likely be a popular addition if reinstated today.

Photographs from the city’s archives show big plots of vegetables being grown and locals tending to them with spade and trowel as others go about their business beyond the picket fencing.

Images of allotments, sunken flower beds, and big, green open space continue to seduce and tempt us with thoughts of what could be – as do old pictures of workers on benches enjoying lunch and chatting together. 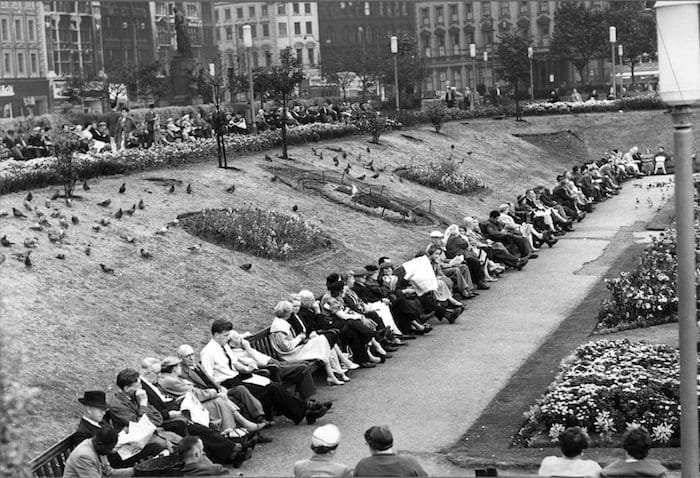 Now we hear that the so-called “Berlin wall’ will be coming down – but the question we all want to know is, when exactly will that be happening?

After all, it feels like we never stop talking about how to improve the gardens, but – last year’s little Christmas Market attempt aside – nothing ever really seems to happen.

Over the years, numerous plans for the area’s redevelopment have been left unrealised: including an art gallery, public library, clock tower, war memorial, and a vast cathedral (another one). Which begs the question: will the wall ever come down?

We’ll keep waiting and dreaming of the park Manchester deserves.