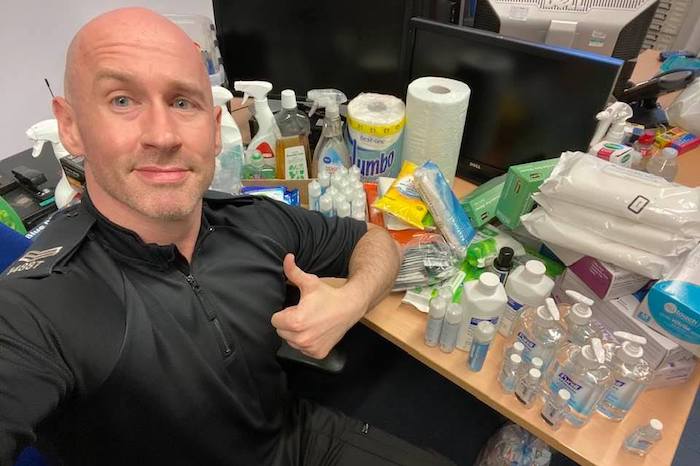 A Salford-based police station has been overwhelmed with generous donations from its local community following a heartfelt appeal made by one of its sergeants on Facebook.

So Sargeant Mike Lawro posted an appeal to Facebook asking if members of the community were able to donate anything.

“I feel rather embarrassed at having to do this on Facebook however I can only ask…” he began, before going on to explain the station’s predicament.

“We have run out of antiseptic and alcohol wipes that we are using to keep our office and Road Policing cars clean and infection free. We are also low on disinfectant and alcohol spray, gloves and hand gel,” he posted on the weekend.

“These are needed to keep the inside of the cars clean so we can to keep them and use on the front line,” he explained.

“Anything spare I will distribute amongst colleagues in other front line departments who I also know are lacking and drop off with NHS departments. It will keep us all going.”

The station, he went on to explain, uses its vehicles for a multitude of reasons, including escorting ambulances to A&E and transporting the families of the injured and bereaved to be with their loved ones.

“It is not so we can prosecute the usual “speeders” and I anticipate the usual jibes about Christmas party jokes and Traffic with nothing better to do etc.”

He soon found himself inundated with offers of help, and within a matter of hours over 100 items had been donated to the police station.

More donations were still coming in that evening as Sargeant Mike posted his thanks, saying “Okay all……Thank You we have enough supplies for now! Over 100 items donated and still coming in!”.

He was overwhelmed by the response to his plea, which saw the post shared nearly 1,000 times reaching those as far afield as Cumbria, York, London and even America.

“The feedback from the public has been beyond belief, it has never been my intention to put people in a bad light on the back of this, I know everyone is working hard behind the scenes. Just sometimes we need the supplies available to us and not locked away or told to ‘make do’.

“All of our operational cars are now stocked up with wipes and alcohol gel, so are our offices which will keep us going for a little while longer. The plan will be to use them to stay healthy as long as we can.”

He’s since updated followers to let them know that the station’s official supplies have now arrived.

“We have plenty in stock for the foreseeable….massive thanks to all those donated and everyone else who worked hard behind the scenes to get our supplies in quickly.”