Hylas, the nymphs and the battle over art in Manchester 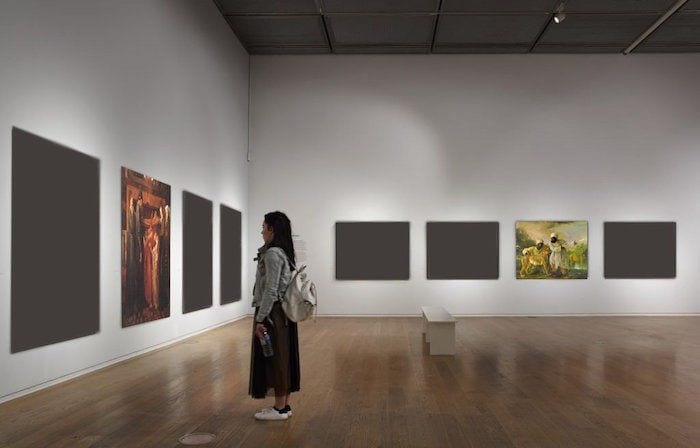 Whatever way you look at it, Manchester Art Gallery did not cover itself in glory when it removed John William Waterhouse’s 1896 painting Hylas and the Nymphs “to prompt debate”.

A curator claimed that the 1896 artwork perpetuated “outdated and damaging stories that women are either femmes fatale or passive bodies for male consumption”.

After a week in which the painting’s usual home was covered with post-it notes condemning the censorship, it re-appeared. Was this really a clever attempt by the gallery to open debate about what offends or a PC stunt that backfired?

Perhaps it was a well worked out plan to bring more people into the gallery which these days never seems to know whether it is a traditionalist home to a large Pre-Raphaelite collection and assorted Victoriana, the works of the French impressionist Adolphe Valette, and a smattering of Lowrys or the setting for increasingly bizarre avant-garde experiments and events.

A social for the launch of last year’s True Faith exhibition devoted to the late lamented Ian Curtis was ruined by a soundtrack disconnected from the music the exhibition was linked to that Black Sabbath would have asked to be turned down a notch.

So let’s have a debate about offensive artefacts.

Jack the Ripper’s Bedroom (c.1907) by odds-on Ripper favourite Walter Sickert has already disappeared as has the most valuable painting in the collection, Francis Bacon’s Portrait of Henrietta Moraes on a Blue Couch (1965), probably because it did not exactly portray the Soho socialite in the most attractive form. As Bacon once explained, he psychologically destroyed his models in rendering them.

Surely it won’t be long before the Pre-Raphaelite paintings by William Holman Hunt, John Everett Millais and Dante Gabriel Rossetti are deemed unacceptable. Come on. Paintings modelled by working class women picked up by these middle class lotharios with the promise of a few quid in lowdown music halls.

But why stop at the art gallery? If Manchester city council was truly progressive, city centre statues of Tories, such as the Duke of Wellington, a man who opposed the masses having the vote, would be removed from Piccadilly Gardens, along with that anti-women’s suffrage reactionary Queen Victoria who sits nearby, and….and…

There has long been a battle over art in Manchester. Occasionally it’s between the art world and the Philistines.

When Manchester Art Gallery opened in 1882, after being converted from the Royal Manchester Institution, a gentlemen’s club, the mayor picked up the name plates from the top table at the opening banquet and said to his assistant: “Who or what is a Holman Hunt?” as the great Pre-Raphaelite stood nearby horrified.

A hundred years later, the battle in the Manchester Labour Party that controlled policy for the council was over whether the most valuable paintings should be sold off to raise funds for council repairs.

Some members – me included – had to explain to the more idiotic councillors that Manchester attracted visitors and status by having an art gallery, while the budget for housing repairs had to be limited somewhere otherwise it could suck in every penny in the city.

More recently, the conflict has been between the bonkers wing of the local art establishment and the traditionalists, those who want nothing more than a gallery packed with quality works of art. Yes, it’s that simple.

Under Maria Balshaw’s recent regime, the popular Manchester Room was eradicated and replaced with an installation that consisted of lots of black and a Smiths song replayed ad nauseum. That was the beginning of the current obsession with form over content.

Some of those in charge believe that a gallery full of works of art is a bit dull. The gallery is there to challenge, shock, “prompt debate”.

Imagine the same approach to one of my professions, guiding. Instead of taking people around Manchester on a tour, explaining the architecture of the buildings and telling their story, we mimed or stayed silent or never left the Visitor Centre.

It took Manchester decades to establish a reputation as a city of culture rather than a land of smoke-billowing chimneys and Gradgrindian industrialists. Taking down paintings in the art gallery because someone might be offended shames the city.