Honest eating: could Manchester be trusted with Basque style pintxo? 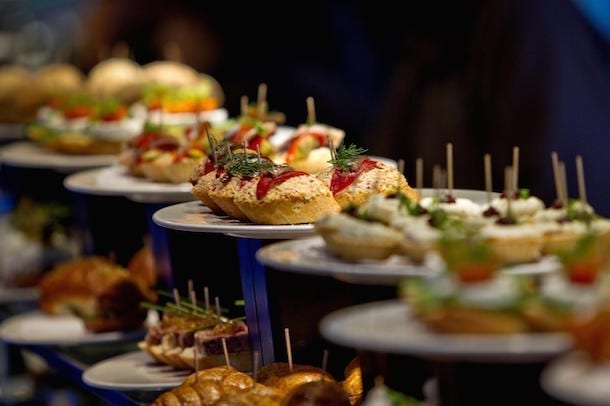 Manchester is currently missing a restaurant that specialises in pintxo – bite-size tapas that originates in the Basque region of Spain. As a quirky form of dining that requires customers to tell the waiter how much they have eaten at the end of the meal, Simon Binns asks if, as a society, we would be honest enough to join in on the fun.

So we could have talked about how not to handle a customer complaint in the internet age.

But really…does anyone still not know how it all works?

And then I was also quite interested in Iberica, and off the back of that, the levels of investment being ploughed into new restaurants in the city.

Millions of pounds are being shovelled into each new venue, as the competition intensifies. Dizzying, really.

But when I was chatting about Iberica with a Catalan friend, and pontificating on when someone would open a proper Basque pintxos bar in Manchester – you know, a San Sebastien or Bilbao-style hangout with bar tops full of bread and tapas towers and tumblers of free-poured wine – she laughed, and raised a reasonable point.

‘That would never work over here. You have to have honest customers.’

In those bars of northern Spain, where everything is pinned together with toothpicks, the honesty system is key.

The toothpicks hold the pintxos together. You take it out, eat the food and leave the pick on your plate. When you’re all done, you take your plate – and all the toothpicks – back to the bar so they know how much you’ve eaten and how much you have to pay.

But, asked my friend, would customers in this country be as honest, or would they sneakily hide/drop/lose toothpicks to keep the cost down?

Can we be trusted, basically?

We are a nation that think it is fine to snaffle the occasional jelly bean from the metaphorical pic’n’mix counter of life, so what hope have we of being so transparent as to admit to spending money when nobody is really there to keep a check?

I must admit to having once left a restaurant without paying my bill, although it was by mistake and entirely their fault.

Remember Obsidian? It used to be good, then it went rubbish. So rubbish, at one point, that after a particularly bad meal and service there, we went up to complain but, in a very British way, pay the full bill.

The waiter looked braced for an ear-bashing, but just opened the door and said ‘thanks, see you later’. And out we walked, in confusion and shock more than premeditated criminality.

People ‘doing a runner’ is still an issue in restaurants – although less than it used to be, according to a lot of operators I speak to.

And this is where social media comes back in. If you’re going to try and be sly in a restaurant these days, you’d better be good.

There are cameras everywhere these days, and as Burger & Lobster proved over Christmas, combined with social media it can be a powerful combination in making sure people pay up – even if they thought they’d gotten away with it.

And while one King Street restaurant was making headlines because of customers who did turn up, a bigger problem for some restaurants is those who don’t.

There’s even been talk of pre-paid seat booking systems, which already exist in the US, being introduced to counter the no-shows.

In London, pop-up honesty bars are a thing (even though hotels and B&Bs have been doing it for years), predicated on the idea that you pay what something is worth.

I’d argue that, by and large, we’re an honest bunch. We’re ready for the toothpick system. I’ve got faith in us. In you.

The pic’n’mix aisle is still up for grabs though.