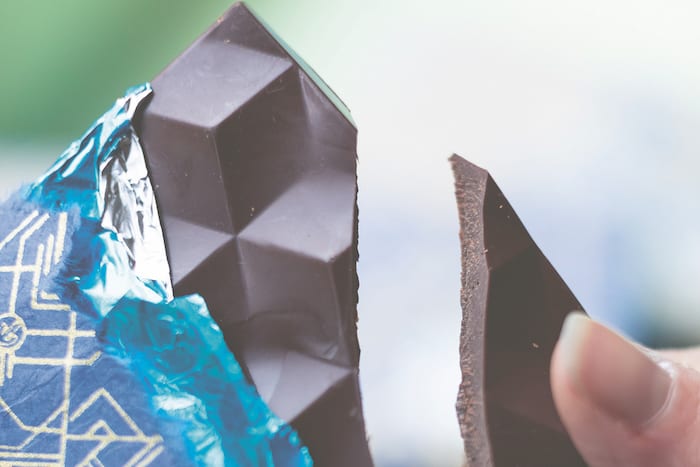 Is chocolate making set to be the next big craft food trend? Andrew Baker thinks so. The demand for chocolate with high cocoa content has risen in the past few years, says Andrew, and the industry revenue is forecast to grow in the next five years.

The international chocolate judge, journalist and author travelled the length and breadth of the country from Devon to Scotland to seek out the pioneering bean-to-bar makers who ethically source their cocoa beans and roast them in-house to make world-leading artisan chocolate.

The result of Andrew’s chocolate odyssey is new book From Bean to Bar: A Chocolate Lover’s Guide to Britain, published this week, which features chocolate makers who concentrate on the quality of their most important ingredient, and who care about the well-being of both their suppliers and their customers.

And there’s a whole chapter dedicated to Manchester.

“When I think of artisanal food and where it is made I think first of all of a cottage, somewhere deep in the country,” writes Andrew. “A place of timeless Olde English charm, part Country Life cover photograph, part Harry Potter Hogsmeade village.

“In the cottage kitchen, where smoke drifts under low beams, I envisage an apple-cheeked and perhaps rather stout lady labouring mightily at a solid wooden table with a range – an Aga or Rayburn – cluttered with pots and pans in the background, and a ginger cat contentedly asleep in a ray of sunlight on the window.”

Manchester city centre, of course, just isn’t like that.

“The reality chez Dormouse in Manchester could not be further from such bucolic fantasies. The shop is down the modern-day equivalent of a back alley – a first floor-level ‘mews’ over the road from a brand-new Hilton hotel and bang opposite a smart cinema.”

One of Dormouse Chocolate’s next-door neighbours is “an axe-throwing centre – no, really – and on the other side is a virtual reality adventure playground.”

And they’re fun and quirky, too. Their anatomically correct heart is an annual bestseller every Valentine’s Day. Not “pretty or cute,” but “asymmetrical, fed by arteries and flecked with veins, and executed in solid (and solidly delicious) single origin – last year it was Peruvian dark or milk, or Madagascan golden white.” 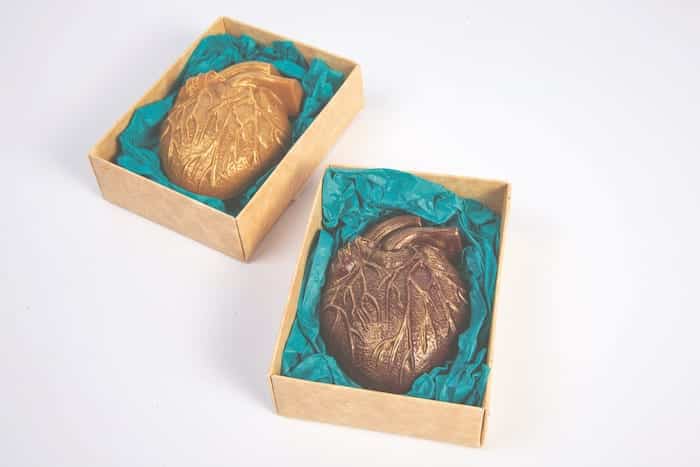 There is wit in the flavourings of Dormouse bars as well, says Andrew. At Christmas they did a “festive take on the continental Christmas cake Stollen, for example, and an approving nod to the company’s Manchester heritage with an upcoming ‘cup of tea’ bar – actually a milk chocolate infused with tea flavours, courtesy of the local (Chorlton) tea merchant Bohea.”

Behind the fun, though, is a keen appreciation of technique and hours of close study of flavour and texture.

Their “Toasted White, a mellow golden creation as far removed from the Milkybar as Manchester is from the moon, brings new subtlety and depth to a kind of chocolate that is often overlooked by ‘serious’ makers. It won huge admiration among fellow makers, a spot on the Sunday Brunch television show and a Gold at the Academy of Chocolate awards.

“This and other fresh takes on chocolate traditions have won Dormouse an international reputation, rave reviews from National Geographic magazine and a rapturous reception from American food journalists when they flew over as honoured guests to a US chocolate festival.”

And their fame is spreading far beyond Manchester and its suburbs. “As far as the upper reaches of Switzerland,” in fact.

In many ways the city is ideal for a set-up such as Dormouse, writes Andrew.

“There’s a powerful and long established food and drink culture (barm cakes, black pudding, beer and more) that has been turbocharged by the UK’s artisanal food boom of the last few years.”

Dormouse isn’t the only Manchester business to attract Andrew’s attention. He flags up Pollen Bakery in Ancoats as the place to buy Dormouse chocolates, as well as Cocoa Cabana, the Didsbury chocolatiers who will soon be opening a branch in Ancoats.

Manchester may not have historically made an impression when it comes to chocolate making – “while Birmingham had its Cadburys, Bristol its Frys and York its Rowntrees… Manchester had, in the local patter, bugger all,” writes Andrew.

But perhaps that is changing. Here’s hoping.

From Bean to Bar: A Chocolate Lover’s Guide to Britain is published 23rd August by AA Publishing, priced £15.99.