First look at Dishoom Manchester: what’s it like inside the new Manchester Hall restaurant? 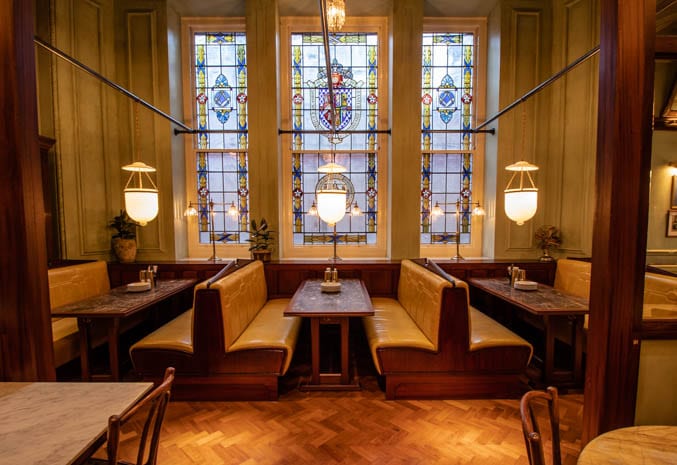 Like their other restaurants in London and Edinburgh, this newest member of the Dishoom family will pay loving homage to the old Irani cafés of Bombay, and will be open every day from early until late with capacity for 200 diners. 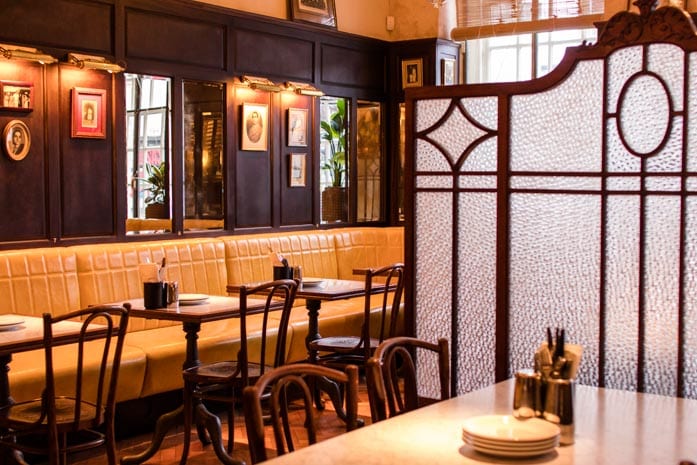 What can diners expect? We took a look round the new restaurant and bar before it officially opens to find out. 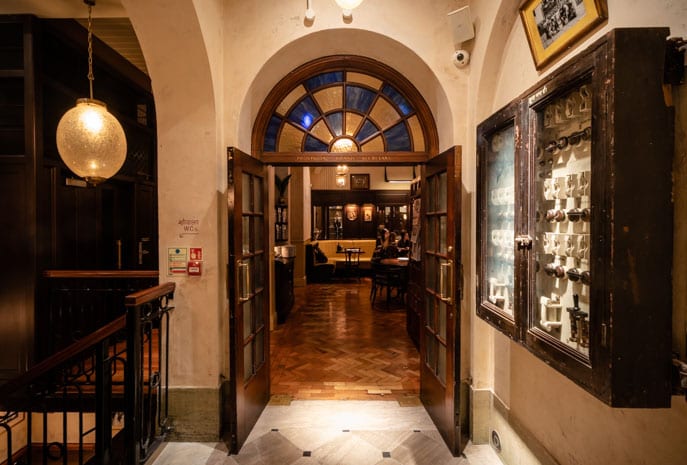 They have brought over 150 items to decorate the Manchester branch, from lights and fans to pieces of furniture, some which have been purchased from the ‘thieves market’ bazaar in Mumbai. A huge wooden sign hangs in the entrance hall, and features a masonic symbol. Fitting for its new home.

The first room diners come to is the family room, a bright space which will serve breakfast – including the famous Dishoom bacon naan – from 8am daily. 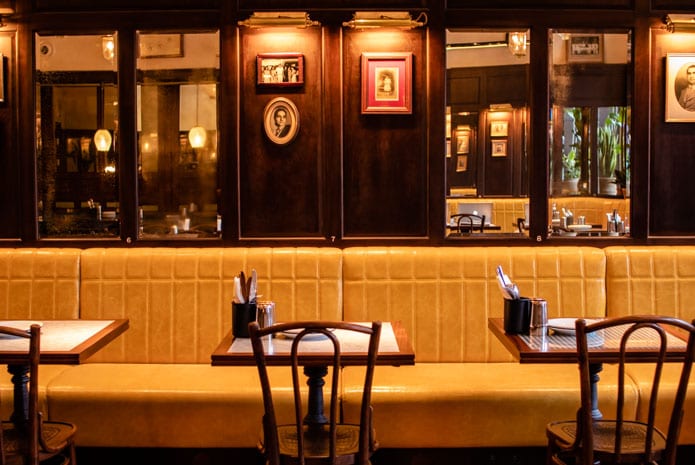 “It will bring in the feeling of the family rooms in the original Irani cafes,” says Dishoom co-founder Kavi Thakrar.

A large square clock is from the Bombay Cotton Exchange, says Kavi – another link between Manchester and Mumbai is the history of cotton trading. 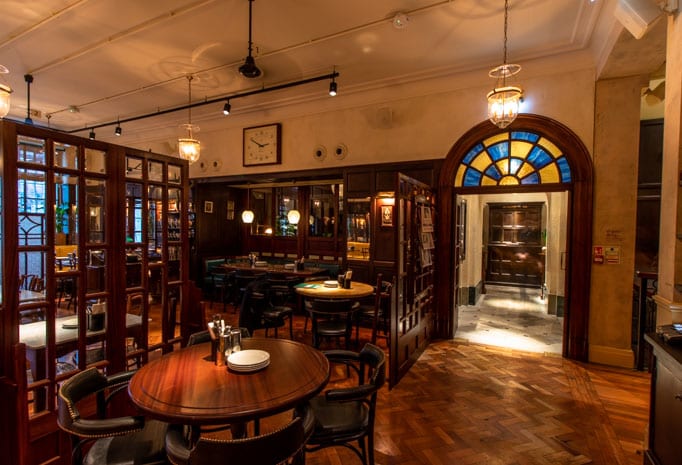 The Permit Room bar upstairs – named after the official term for all Bombay drinking establishments, in which, according to the Bombay Prohibition Act of 1949, only permit-holders may consume alcohol – will serve classic cocktails such as the East India gimlet, hoppy butter paanch and monsoon martini. 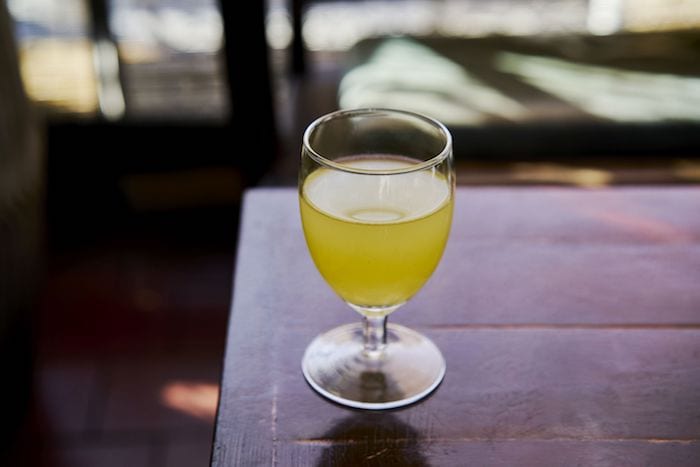 We tried a raspberry soda, which Kavi tells us is only usually served in irani cafes in Bombay. Called Pallonji’s, and established in 1865, the label on the retro glass bottle proudly boasts “contains no fruit”. It’s delicious – like childhood sweets.

The main dining room is called the Brother Cursetjee Dining Hall, named after the first Indian Mason. It’s a grand space which can seat 150 diners, with dark wooden furniture and colourful leather banquettes. 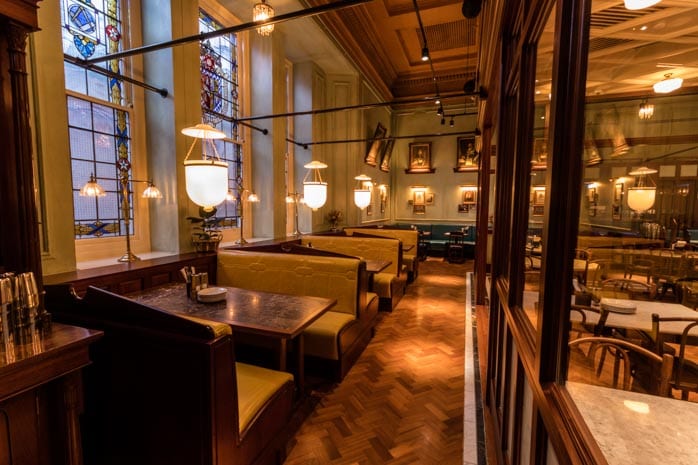 There are specially-commissioned portraits of the Indian Masons’ Grand Masters hanging around the room, and a large bar at one end, illuminated by the original stained glass windows of the hall. The original polished wooden floor had previously been covered by a dance floor.

There’s a special dish, just for Manchester, too: a decadent nalli nihari biryani. Think tender shank of lamb layered with rice and caramelised onions then sealed beneath a pastry blanket. It will be served with a rich gravy on the side. 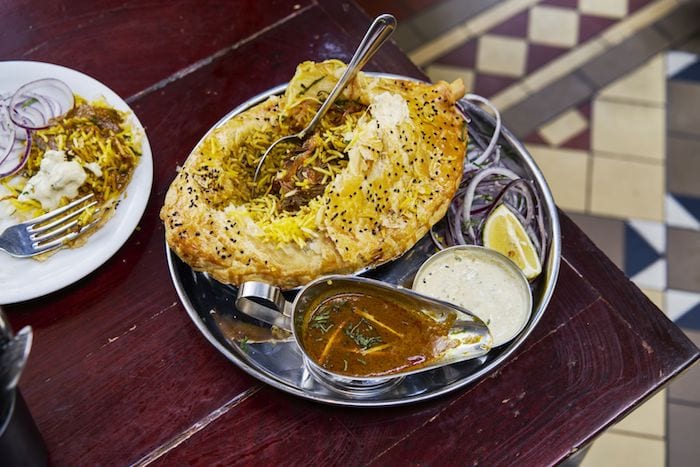 The old photographs adorning the walls in all the rooms are of the owners’ families, and those of their staff. It’s a lovely personal touch. The Manchester restaurant currently has a staff of around 90 people, many recruited locally, says co-founder Shamil Thakrar.

The staff have all spent time training at the London restaurants, so that the customer experience is consistent.

“The people here are way nicer, though!” says Kavi. “I love coming to Manchester.”

We can’t argue with that.