Even if you don’t consider yourself a combat sports connoisseur, you will have almost certainly caught a glimpse of Mixed Martial Arts whilst scrolling through your social media feed in recent months. The sport is massive in the UK right now and it’s only going to get bigger.

When news surfaced that Manchester Arena was set to host UFC 204 earlier this year – headlined by one of the city’s very own Michael Bisping, no less – it suggested great things for Manchester’s relationship with MMA. 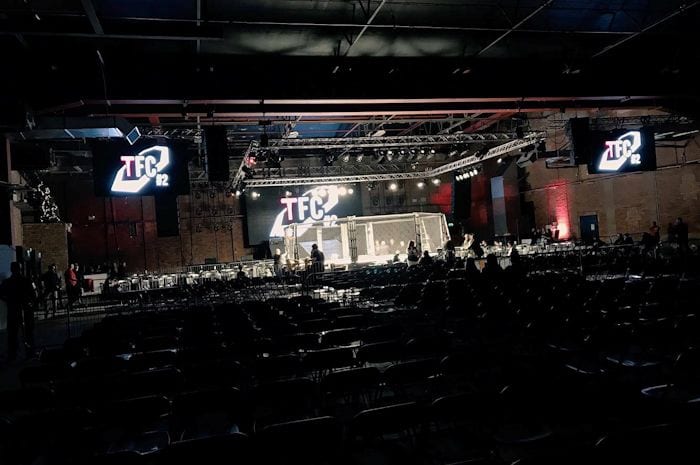 The heads behind this Manchester-based promotion have designed an accessible show that inflames the senses and gets the adrenaline pumping, offering a selection of tickets to suit all budgets, from standard to VIP to Balcony Bar seating areas.

And in Victoria Warehouse they’ve picked a cracking spot for their spectacle. After hosting a few seasons of The Warehouse Project and numerous other rave events, this venue has been a bit of a home for hedonism in recent years. However, the whopping poster they’ve plastered up by Trafford Road roundabout (“WE ARE NOT A WAREHOUSE”) suggests they’re trying to escape that image and broaden their horizons into catering, accommodation and sport.

On Saturday, it proved to be an ideal venue for a combat sports event, with the oceans of space available allowing a ring to be comfortably plonked in the centre of the main room whilst the industrial-like aesthetics offered an underground fight club-style backdrop.

The venue also boasts a crisp, thudding sound system that packs a bigger punch than Connor McGregor, and when the Tanko Fighting Championships 2 intro video exploded into life on the big screen to kick off proceedings, even the surrounding steel pillars were left clinging on for dear life.

The evening’s fight card featured competitors from Norway, Spain and Poland, with several high-profile slots for fighters from many of the locally based gyms in and around Manchester such as Predators, Franks, All Powers, Salford MMA, Supremacy, SBG, and Anarchy MMA.

The bloodshed that came about as early as the second round of the first fight hinted at the brutality that was to come, and TFC 2 proved to a serve up a smorgasbord of superb scuffles between some incredible athletes as the night went on.

Brendan Loughnane – a young man who learnt the trade by fighting in his backyard in Withington – bagged his third knockout of 2016 by beating Paul Cook in the headline fight, whereas fellow Mancunian Kane Mousah also overcame tattoo-washed opponent Onur Caglar in the first round. There were also wins for local lads Andy DeVent and Alex Minogue, as well as Panicos Yusuf – head coach of All Powers Gym in Stockport.

The athleticism on display was admirable, but what really made Tanko Fighting Championships 2 quite so absorbing was its sense of showmanship. The entire event was streamed live on YouTube, with the commentators and presenters conducting live analysis before, during and after the show to keep the crowd and web viewers involved and informed throughout.

Whether you’re an avid MMA supporter, a part-time UFC viewer, or completely new to the sport, attending Tanko Fighting Championships at Victoria Warehouse is the very best way to experience Mixed Martial Arts. It’s a promotion fuelled by palpable passion, starring some of the biggest British fighters in the game and also offering a perfect platform for fledgling competitors to make a name for themselves.

Naturally, we’re a little biased here, but we like to think Manchester is best when it comes to all sorts of things – whether it’s sport, culture or nightlife. With events like Tanko Fighting Championships 2 roaring into action on an increasingly regular basis, Manchester may also prove to be the go-to venue for MMA in the not-too-distant future.

A third instalment of TFC is already scheduled for early 2017, so keep your eyes peeled for announcements in the coming weeks.