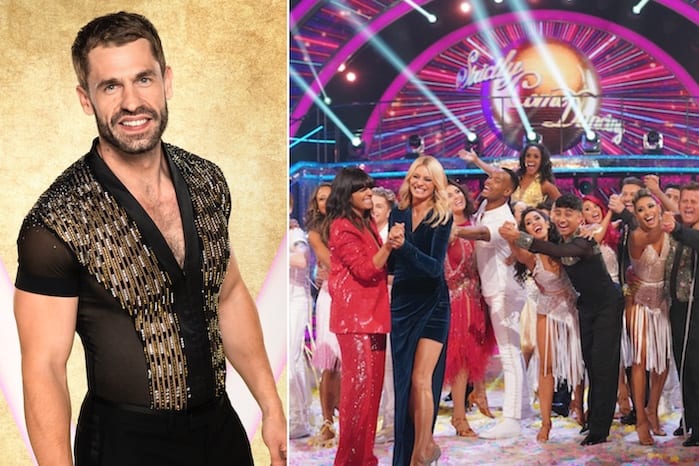 BBC bosses have announced the replacement for injured Jamie Laing on this year’s Strictly Come Dancing will be ex-Emmerdale star Kelvin Fletcher.

Oldham-raised actor Kelvin will step into the breach after Made in Chelsea star Jamie injured his foot on his very first group dance on the hit show which returned to the BBC on Saturday night.

Fans saw 30-year-old Jamie paired with professional dancer Oti Mabuse in the grand launch show on Saturday, which was pre-recorded last month.  But at the end of the show, it was revealed that Jamie had been badly injured in the show dance and would be unable to continue his Strictly journey.

It is the first time in Strictly‘s 17-year history a celebrity has had to withdraw at such an early stage.

Show bosses confirmed early on Sunday morning that a replacement had been found – in the form of muscular actor Kelvin, 35, who is best known for playing farmer Andy Sugden on Emmerdale for 20 years.

The announcement was made on the BBC’s official Strictly Come Dancing social media channels, and cast and crew were quick to send messages of support welcoming Kelvin to this year’s show.

Kelvin, an Oldham Theatre Workshop alumnus, left his long-running role in Emmerdale in 2016 to pursue other interests, and is also a professional racing driver competing in the British GT championship.

He married Liz Marsland in 2015 and the couple are parents to two children.

It is expected Kelvin will begin training with show favourite Oti this week, ready for the first live Strictly shows which will start on Saturday, September 21st.

After the announcement at the weekend, Kelvin posted a series of excited videos on his official instagram feed to thanks fans for their support.

He said: “I’m overwhelmed by the response so far.  I can’t believe it, it’s a dream come true for me I’m such a huge fan of the show.  Those that know me know I love music and I love to dance.  That’s not to say I’ll be any good!

“I’m excited to meet all the fellow professionals.  Obviously it’s bittersweet because of Jamie’s misfortune, I can’t help but feel for him.  I’m wishing him all the best in his recovery.”

He will join the starry line-up on this year’s Strictly that also includes north west hopefuls –  former Coronation Street star Catherine Tyldesley, from Walkden, and BBC sports presenter Mike Bushell who is based at MediaCityUK.

Corrie favourite Catherine, who stars in the BBC’s new comedy series Scarborough, was the first to find out which professional dancer she will be paired with on Saturday’s launch show – Strictly newcomer Johannas Radebe.

She screamed with delight when her dancer was announced.  She later revealed to show co-host Claudia Winkelman that her own dance style might best be likened to Mr Bean!