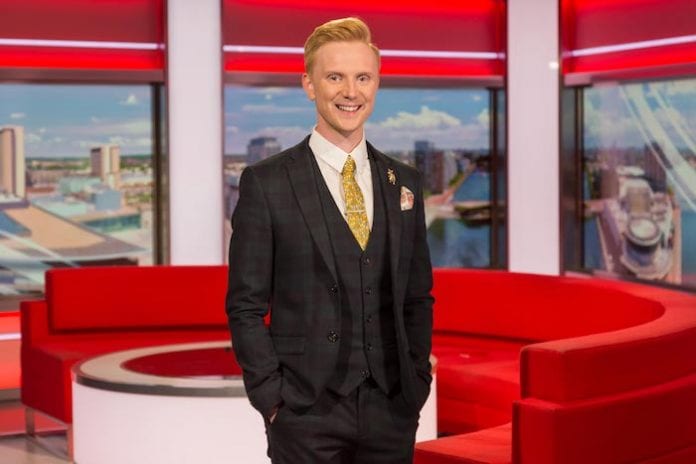 Owain has been announced as the new permanent weather presenter for the beeb’s flagship regional evening show, and will be joining Roger Johnson and Annabel Tiffin every week night from 6.30pm on BBC One.

Owain, who describes himself as “unapologetically flamboyant” is known for his snazzy suits, signature bling brooches and his quirky, upbeat presenting style that won him an army of fans over on the BBC’s Look North show in Yorkshire for the past four years.

Now he’s making the move across the Pennines to Manchester – and he’s describing it as the “dream move”. 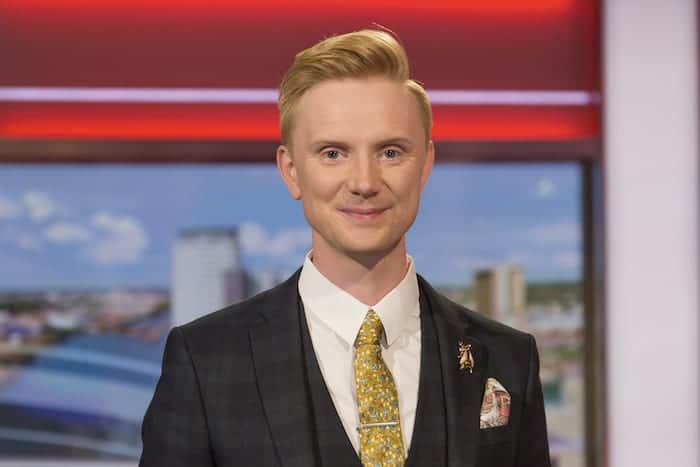 Owain, 35, says: “It’s going to be a real honour to present the weather every evening on BBC North West Tonight. I’ve presented quite a few programmes already, and Annabel and Roger are absolute darlings – I’m very excited to be part of such a well-loved programme! After working in Wales, London and Yorkshire I can’t wait to start working in the North West permanently.”

He adds: “I grew up in a small, ex-mining town called Ammanford in South-West Wales. An area surrounded by both gorgeous countryside and industrial cities, very similar to parts of the North West in that respect.”

Although Owain’s start at BBC North West Tonight is also tinged with sadness – as he takes over the role from much-loved weather presenter Dianne Oxberry who died in January of ovarian cancer.

Owain had long admired Dianne and admits they are huge shoes to fill in taking on the role.

He says: “I knew Dianne and they are undoubtedly enormous shoes to fill, she was well loved by the audience, it was so so sad.

“It’s a strange feeling knowing that Dianne isn’t here any more, and that I will be taking up the position. The audience clearly loved Dianne and she was a huge part of the programme.  What I have seen though from a couple of shifts at NWT is how much of a warm welcome I’ve had already.”

Presenter Roger says: “Dianne was adored by the North West Tonight viewers and we all still miss her.  In the months since she died several excellent weather presenters, including Owain, have helped us.  We’ve had a positive reaction from many viewers and we are sure they will make him welcome.”

Owain will also be well known to many across the world after his weather forecast in celebration of International Drag Day in 2017 went viral as he paid tribute to drag queens from RuPaul’s Drag Race.

He has also collaborated with Queer Eye’s Karamo Brown for a series of videos celebrating Pride events across the country for Netflix – and RuPaul also retweeted his latest forecast for Manchester Pride over the August Bank Holiday Weekend.

He is a proud advocate of the LGBT+ community, and says he always brings his personality to every forecast.

He says: “I try to be myself more than anything, on TV you’re caught out very quickly if you’re not.  Especially with NWT there’s a lot of interaction between Roger and Annabel, so I’ll be bringing my own style and I do put a lot of personality into it when required, yes there’s a touch of flamboyance but that is just me.  I have a penchant for an extravagant brooch and a pocket square.

“Part of me is the fact I am a gay man, I’m married, my husband and I have been together over 10 years and I’ve hosted a lot of Pride events.

“When I was growing up there were no people on TV who were role models, there was no visibility – until the age of 12 I didn’t see any gay people on TV, they certainly weren’t out in our community.  My family have always been really supportive of me but I know it can be difficult for a lot of people that’s why I feel so strongly about positive role models.” 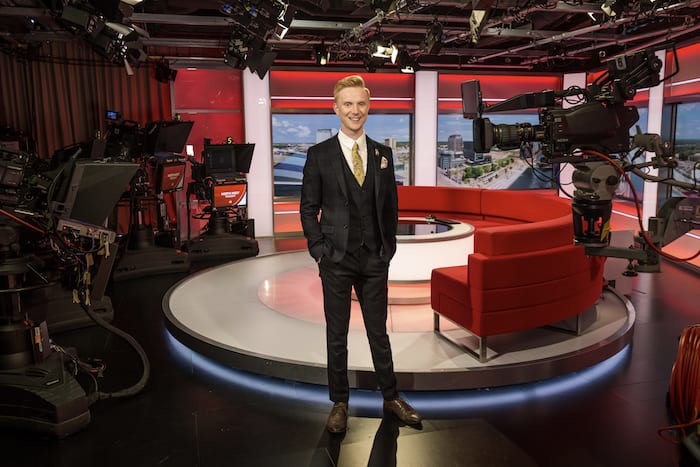 Owain’s career began on a Welsh-language children’s news programme at the age of just 18 before he began working as a reporter and presenter for BBC Wales.

He moved into weather after studying meteorology with the Open University and has worked all over the UK with weather presenting cover for various BBC outlets. Owain has also presented on a number of BBC radio stations across Yorkshire and he regularly presents on BBC Radio Wales, alongside Carol Vorderman.

For Owain, presenting the weather is a real honour – because viewers are always so passionate about it!

He says: “What’s lovely with the weather is you’re telling people something they actually want to know about and it will affect them day to day.”

And he is already getting settled into Manchester life – and we’re pleased to hear he’s already carrying the must have item – an I Love MCR tote bag!

He laughs: “My husband got the I Love MCR bag at an event, and so I’ve already been using it every week for my shopping!  Manchester is such a friendly, inclusive city and I can’t wait to discover it even more.”