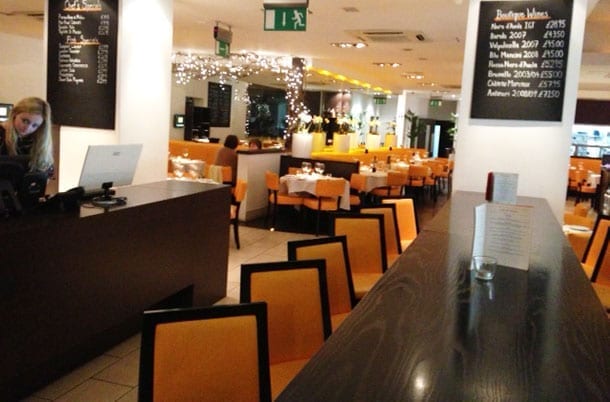 I had last been here what feels like a century ago when it was on the other side of the road and the veggie in our party got a pizza with carrots on top which we all thought a little strange.

“…a classic Italian vibe and is extremely reasonably priced…”

Now it has strutted across the street and is a beautiful, glittery space done up in winter whites with Verve Clicquot orange-coloured booths, bright and a bit San Carlo-ey, the sort of place you could take your mum or a date and feel stylish. 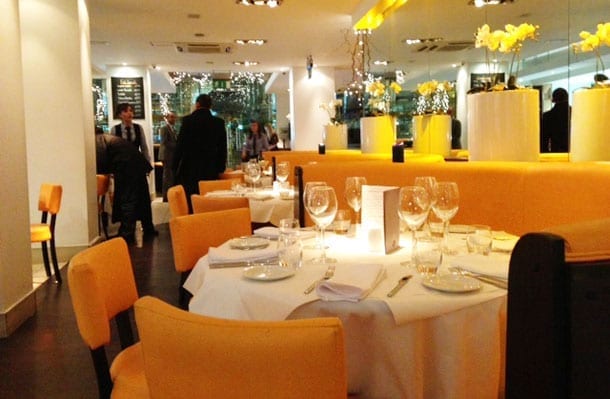 The menu has a classic Italian vibe and is extremely reasonably priced with starters from £3.95 and mains from £7.45 – a glass of fizz is under a fiver. They also boast a daily fresh fish menu, something we hear a lot of in town but don’t always see delivered.

I started with the Bresola, wonderfully slim-cut aged beef with peppery rocket and gnarled parmesan, gorgeously simple, letting the ingredients do the work, though it could have done with a little less rocket and a bit more oil.

Chewitt chomped on squid, which with his chef’s hat on, he said this was something of a test as it is often, well chewy. But his was delicious tender rings, melting in the mouth with a super flavour, in fact he reckoned they were the best squid he’s had, which is praise indeed from a fighter and a cook. 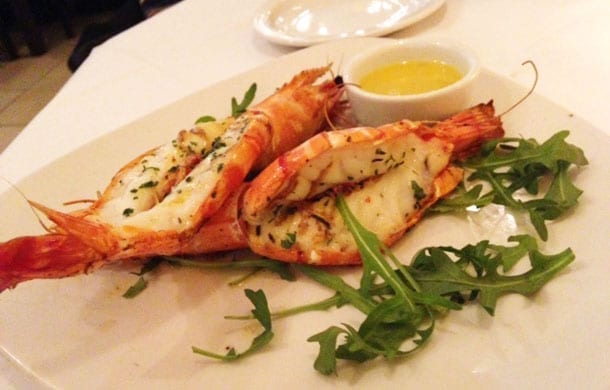 Ginger went all veggie with mushrooms that sounded a little dull on the menu but were a fungi festival of flavour, garlicy and herbie meaning he didn’t miss the meat at all.

But it was Dubai who had the money shot with grilled giant prawns in garlic, showing DG can deliver on the fresh fish promise. These were hugely fat and meaty prawns, with none of the toughness you can get when bigger crustaceans are cooked. Fabulous and worth a trip down Oxford Road for this dish alone. Dubai said it kicked the ass off Vermillion.

I was missing the Gay as the talk for the last week or so has been so testosterone fuelled. The ginger has been doing his best but can’t manage convos about nail polish. They had all been at school together so sniped and bantered as only boys can bicker with some fabby tales from geese hurling to pub bench stealing (‘We found it here officer’).

Chewitt was also discussing his nose, which he is going in to have re-smashed and re-modelled as that had already happened by accident in the ring. He wanted us to help pick it. The boys helpful suggested a re-model a la Barry Manilow.

Onto mains with both Ginger and Chewitt opting for veal dishes, now this was going to be interesting as we have never found anywhere that can do veal in recent reviews, instead we have had grey bits of washed-out tough bovine. 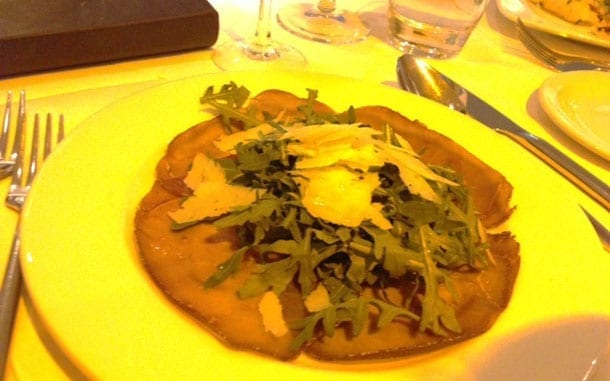 Ginge opted for veal with parma ham and traditional sage butter sauce. Ever since I have banned the boys from unhelpful descriptions such as good or shite, they have been waxing lyrical about their food.

So from the mouth of Ginger: ‘I want to be shrunk into a tiny ginger and roll around the plate, swimming in the sauce’. I tried it too and he was right, this was the perfect veal dish and at last we have found somewhere in the city that cook this delicacy properly.

Chewitt’s bread-crumbed veal Milanese with spaghetti was another winner, though, again with his professional eye (not the stamping on people one) he thought the bread crumbs could have been more flavoured.

I had chosen lobster spaghetti because I love this dish and wanted to see if they could cook fish (obviously I’d ordered this before the killer prawns confirmed they could smash it). It was a gorgeous chunk of pinky half lobster meat in a creamy sauce with splodges of cherry toms that squirted a perfect taste bubble in every other mouthful.

Dubai had created his own pasta dish based loosely, and I mean very loosely, on carbonara by replacing the spaghetti with tagliatelle and the ham with chicken – hello. As ever the wonderful staff were more than happy to please and might even keep his concoction on the menu. He loved it, which as he did everything but cook it, was not really a surprise.

Onto puds and Chewitt’s blueberry sorbet he said tasted like purple lego – a good thing apparently. Have you eaten lego I quizzed? Yes. Recently. Yes. Okey dokey, must be a cage fighter thing. 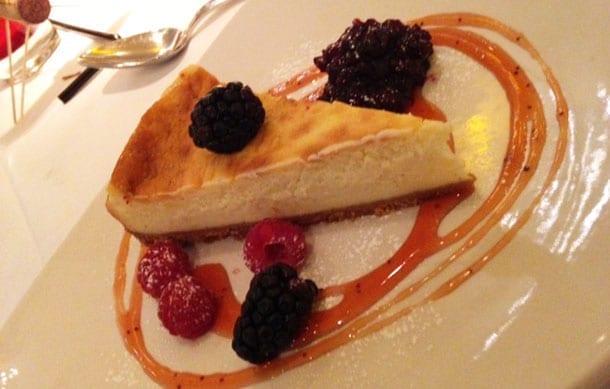 I dipped in out of an Italian mess (gorgeous), gelato (fabby and actually like the stuff you get in Italia) and a cake of some sort (wonderfully cakey). The only thing the pudding monsters didn’t adore was a cheesecake.

Then it was off into the eternal winter for a nightcap at the Liquor Store, but that’s another story…

This is an Italian stallion of a restaurant, one that’s overlooked because of the flashier boys in town. It has hidden depths and rekindles my faith in Manchester doing Italian food. Go.