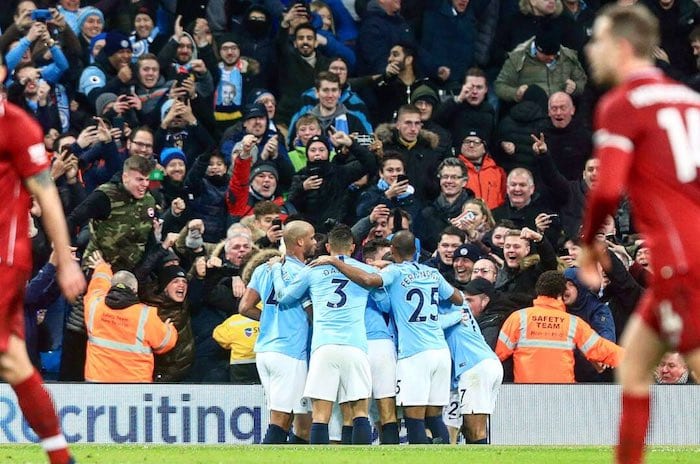 The past week or two has seen social media flooded with memes and quotes from Manchester United fans stating how if Liverpool win the Premier League title it’s all City’s fault as United held them at bay for over twenty years.

City’s performance against Liverpool on Thursday evening suggests they will do everything in their power to make sure this is not their year.

Even with lots of games still to play, the game was being tipped as a potential title decider, with Liverpool hoping to extend their lead to ten points and the Blues looking to nibble away at the points deficit.

It was a brilliant team performance which had the crowd in full voice from the start and won a deserved victory, even without Kevin de Bruyne, one of the most influential players in the squad. 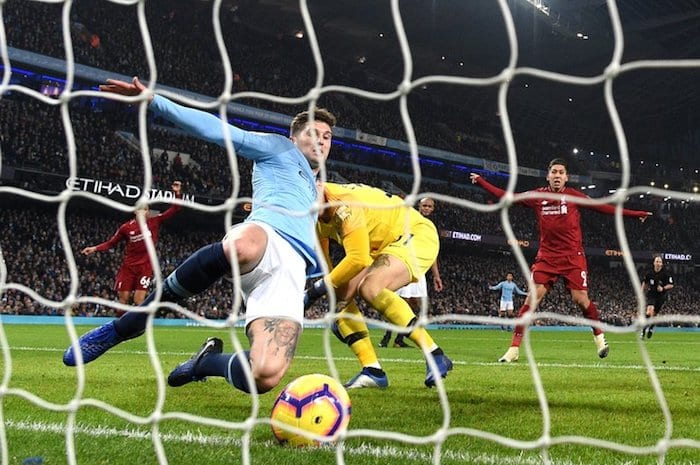 As with most big games, this one wasn’t without some controversy, with Vincent Kompany booked for a ’scissor’ challenge in the second half. The Belgium defender received a yellow card for the challenge but Liverpool felt he should have been sent off for it.

Regardless of the outcome it was a challenge that quite possibly helped City take all three points.

One player who did make an appearance and an influential one at that was Fernandinho.

It has long been noted that City are a much better side when he is in the team, quietly getting the job done, breaking up the opponents’ attacking play and turning defence into attack in a split second.

City have missed him over the festive period, a period where the Blues lost vital ground over Liverpool in the title race losing to Crystal Palace and Leicester before returning to winning ways against Southampton.

The game felt like a final and Guardiola was pleased with how his side buy valium tablets performed both on the night – and also over the past sixteen months.

“Liverpool are still top and it’s enough points to become winners, but at the same time it’s good time for me to congratulate these incredible players what they’ve done over the past 16 months. (City) showed everyone how good they are against and incredible team. Both teams played to win and although it’s not a final… it was a final to us! Winning today – the Premier League is eveyone’s tie again.”

The result will have pleased the rest of the chasing teams and means the title race is wide open again. The pressure is now mounting on a Liverpool side attempting to end a twenty-nine year wait for the title.

Manchester City have let Liverpool know that they are going to have to fight for the title if this is to be their year. Another team who could have a significant impact on who gets to be crowned Champions at the end of the season are also from Manchester.

United legend Ole Gunnar Solskjaer, who has been given the job of steadying the ship following the sacking of Mourniho, has seen his side scoring goals in abundance in his first four games in charge as they chase a top four finish.

Super Sunday on February 24th sees Manchester United host Liverpool at Old Trafford and if recent results and performances are anything to go by, Jurgen Klopp’s men will have a tough time when they travel to Old Trafford.

With City attempting to win back-to-back titles, Liverpool playing some of the best football in their recent history, and sides such as Spurs and Chelsea still in the hunt, this title race looks like being one of the most exciting yet.