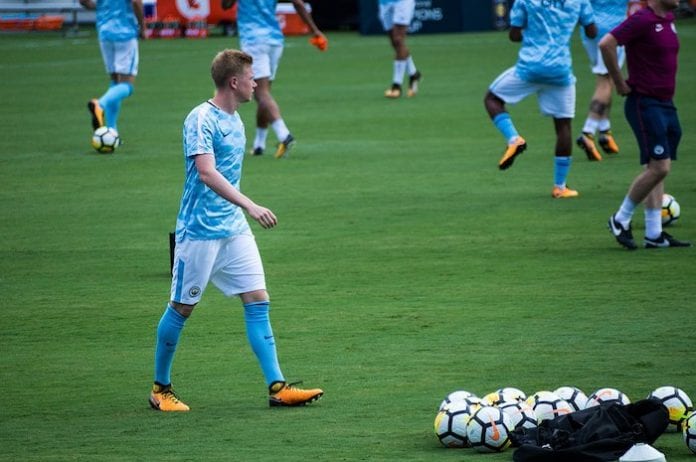 Manchester City have been in scintillating form this season. They now sit five points clear at the top of the table following their 3-0 victory at home to Burnley on Saturday.

With neighbours United slipping up with a 2-1 loss at Huddersfield, City are now the only team to remain unbeaten this season.

Over the past few weeks as the goals have flown in it seems as though one man is grabbing the headlines with assist after assist – and of course scoring the important winning goal against Chelsea in September.  Belgium international Kevin De Bruyne has stepped his game up to a new level this season and is very much considered as playing a huge role in the Blues success so far.

Beckham was renowned for his pinpoint accuracy and caused defenders and goalkeepers no end of problems when delivering crosses and free kicks – a quality Neville feels De Bruyne also has.

“He is deliberate and precise, it looks like every cross lands on a sixpence, like he is aiming for the recipient.

“Too many times you see people cross and aim for an area or zone in the box, but De Bruyne has got the quality and precision to pick people out.

“David Beckham was like that. It’s brilliant to watch”.

Perhaps the best evidence of this was De Bruyne’s role in City’s 7-2 demolition of Stoke last week when the ex-Chelsea player had a hand in five of the goals.  There was simply no stopping him. As Chelsea manager Antonio Conte said, he is looking the complete player.

His work-rate, understanding of the game and incredible delivery must make him one of the best players in the world. Pep Guardiola wants to help make him THE best.

“If he wants to be the best you have to win titles,” Guardiola said. “We are here to help him achieve that. But of course, he’s one of the best.

“He’s an amazing player, a humble guy, and all the team mates love him.”

Despite how well things are going at the moment for the Belgian, things haven’t always been so straightforward.

Although he is by his own admission quite ‘chilled’ most of the time, there are moments where we see stubbornness or anger which hint at that winning mentality sometimes taking over.

His former coach Frank De Leyn recalls an incident from his youth days at Genk when a young De Bruyne had been told off for not helping clear the pitch after training and became so incensed he grabbed one of the posts in a rage and refused to let go.

A 19-year-old De Bruyne also criticised star player Elyaniv Barda because he felt he had not worked hard enough in training.

During his time with Wolfsburg he was caught up in a media frenzy when he shouted at a ball-boy who was taking his time “Give me the ball, you motherf****r”.

More recently we saw a flash of anger as he left the field at half-time in the Champions League match against Napoli. Having just been booked he was heard shouting at team mate David Silva, “Let me talk” several times.

Silva was attempting to prevent De Bruyne from arguing with the referee following his booking.  Following the incident, the more ‘chilled’ Kevin returned.

“That argument was over a minute later,” he said. “It was like one of the ones I have with my wife. At the highest level a discussion can be good sometimes to get everyone back on their toes.”

There was also his unsuccessful spell as a Chelsea player under current Manchester United manager Jose Mourinho where he failed to make an impact despite Mourinho claiming he was a part of his plans.

In January 2014 De Bruyne signed for Wolfsburg where he impressed for several seasons before signing for City in August 2015.

Much has been said of the League already being City’s to lose this season but there is a long way still to go.

And memories of last season when City kicked off with 10 games unbeaten still haven’t faded.  To win the league you need to keep key players fit, take vital points off the top four, and have solid home form.

And, of course, a Kevin De Bruyne in your team will always help.