Corrie spoilers: a prison break, Shona in mortal danger and Amy Barlow’s secret in week ahead 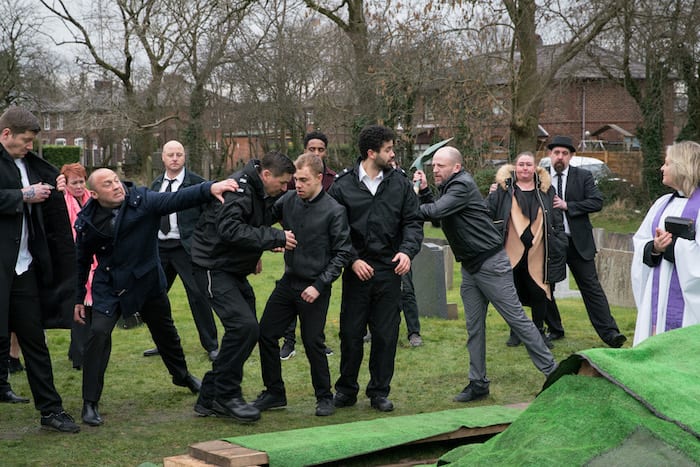 The drama escalates in the week ahead on Coronation Street, with a prison break setting into motion a potentially catastrophic chain of events for the residents of Weatherfield.

Teenager Amy Barlow has been making some important decisions about her pregnancy, but how long can she keep her secret from her parents?

Here’s some teasers of what’s ahead in Corrie.

Jailed killer Clayton is allowed out to the funeral of his deceased dad Dane – but he has hatched a cunning plan. Billy offers to accompany Clayton’s mum Shona to the funeral, but when they arrive, his mate Macca tells her she is not welcome and Clayton wants nothing to do with her.

It soon becomes evident to Shona that something is afoot. Macca and one of the undertakers attack the prison guard and free Clayton. Billy wrestles Macca to the ground, but Clayton escapes.

David is later horrified to discover Clayton’s done a runner and Shona has been arrested. Convinced Clayton will come after his kids, David orders Sarah to start packing their things as they’ve no choice but to leave.

Nick tells David they can move into Victoria Court with him, as a fraught Shona returns home. David hugs her, relieved to have her home safe, but when Shona admits she’s worried about Clayton as he’s on the run and all alone, David’s furious and points out that his kids’ lives are in danger as a result and if he catches Clayton before the police do, he’ll kill him. Shona is devastated.

What is Amy hiding?

Tracy hands Amy a letter from the hospital regarding her next scan, and it appears that it is unwanted news for the teen. Steve tells Tracy and Amy he has upped the offer on the place on Victoria Street and gazumped Claudia.

Later over dinner in Speed Daal, Steve, Tracy and Amy celebrate their new house. When Steve suggests they could find out the sex of the baby at the scan, Amy visibly squirms.

Amy’s lies are out of control

Tracy takes the day off to spend some quality time with Amy before the scan. Amy secretly wonders how she’s going to get out of it.

When Tracy drops her at the salon for some pampering, Bethany urges her to tell her parents the truth. Back at home Amy locks herself in the bedroom and refuses to go for the scan.

David is furious when he discovers that Shona attempted to supply drugs to Clayton and that someone broke into the house. David’s stunned and orders her to pack up and get out.

As Shona climbs in David’s car, on-the-run Clayton gets into the back and orders her to follow his instructions and drive.

Shona speaks to Clayton on the phone and steals £3k from David’s tin in the house and then meets up with Clayton at the derelict warehouse where she took him the night before.

She gives him food and begs him to hand himself in. Clayton grabs the cash off her and makes a run for it but realises the place is surrounded by police. Meanwhile, back at the house David discovers the money has gone but is convinced Sarah took it.

A police negotiator calls Clayton’s phone and he tells them he has taken Shona hostage.

David is stunned when the police arrive at the house and tell him what has happened.

He and Nick race to the derelict building but are told to stay behind the cordon. Putting a knife to Shona’s back, Clayton drags her out of the building and demands £10k and a car or she dies. David watches on in horror.

Tracy argues with Vicky about Amy and the baby.

Vicky lunges at Tracy, pointing out that Tyler could have ended up on the Sex Offenders’ Register. As Tyler pulls them apart, Tracy rails at Robert for employing a rapist.

Robert must decide what he will do at the Bistro.