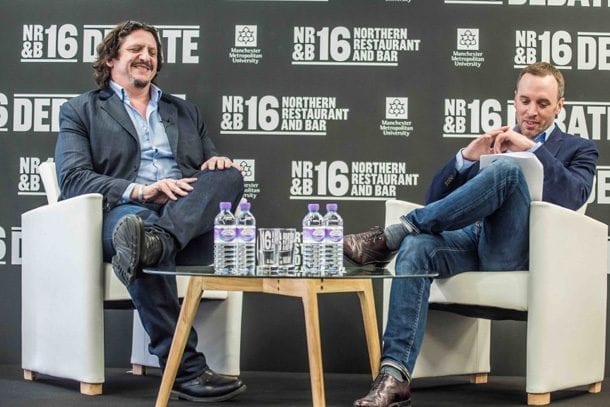 Leading food critic Jay Rayner has spoken out about restaurants in Manchester ‘self-sabotaging’ themselves by not making the food they serve their priority.

“a TripAdvisor Certificate of Excellence is like having the clap.”

Speaking at the Northern Restaurants and Bar Show, the Observer food writer hit out at venues that focus too much on the decor and less on what they’re serving.

“There have been a number of restaurants in this city self-sabotaging by not focusing on food,” he said.

The journalist and broadcaster said that, although he didn’t want to discuss food trends (“it’s a mug’s game”), it’s clear that the big players from around the country are moving to Manchester. “Hawksmoor has proved it’s successful.”

When asked if reviewing restaurants outside London is different from reviewing those in the capital, Rayner quipped, “It depends if there’s a huge, f**k off tree in the restaurant.”

In the past, he’s famously given less-than-glowing reviews to two of Manchester’s most well-known high end restaurants – with the decor earning particularly scathing words. Of Manchester House he once wrote, “The problem is not the food. It’s the restaurant, which cost £3m. It’s all so overworked, mannered and, well, just so damn Manchester. It’s a terrific city, full of energy and enthusiasm, but it has a tendency to tip over into overkill. Manchester House delivers all that self-conscious, tiresome swagger via fixtures and fittings”.

He once wrote that Mr Cooper’s House and Garden “has been made to look like a cheap garden centre café in Droitwich”.

“I gave a bad review to a restaurant in Manchester and then learned that the chef had left. My view was that they didn’t shut or reduce their prices, so it’s fair game.”

But the outspoken critic was keen to highlight his integrity and duty as a journalist when writing his reviews, and that he is employed for how he writes, not how he eats.

“I’m not part of the restaurant industry. You have a responsibility to paint someone in a fair light. I won’t review a soft launch.”

There’s much debate about national restaurant reviewers focusing too much on the capital, and Rayner says he and his fellow critic Marina O’Loughlin make sure they go further afield.

“My out of London is 45%. My next review is on the Wirral, then Liverpool, then Birmingham.”

When asked how he decides where to review, Rayner said there are a variety of factors. He looks at press releases, talk on Twitter and also will ask people he knows. But he’s not a fan of review sites.

“TripAdvisor is an effing nightmare. I won’t be going if it has a TripAdvisor Certificate of Excellence. It’s like having the clap.”