Buzz Off! 10 Things You Know Buzzfeed Doesn’t Know About Manchester If You Live In Manchester. Literally 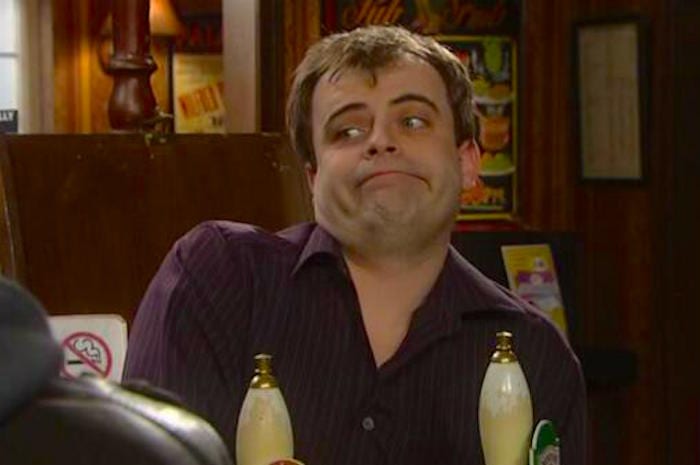 I know. It’s a pretty mundane thing to be snarky about, throwaway Friday afternoon whimsy. I actually like it.

Still, I see articles on the likes of Buzzfeed that ‘all Mancunians’ would relate to, but they often seem about as authentic as Don Cheadle’s cockney accent in Ocean’s Eleven. [The editor will probably delete the following 5,000 dissertation on Don Cheadle’s accent travesty, but if you’re interested you can usually find me shouting at the general public about it on street corners on Oxford Road Fridays and Sundays. I can’t believe nobody cares.]

Wheeey, is it a barm cake? Yes. Yes is the correct answer. Wheeey it rains. Yes. Yes it does. Wheeey something else which is as authentically Mancunian as a London-restaurant-critic-in-Manchester’s Manchester references.

Without further ado, our kids..

Things That Mildly Annoy Everyone From Manchester

Buzzfeed says: “Not getting gravy on your chips.”

We say: I love chips and gravy, and it is an absolute disgrace they don’t have it down south. It’s a badge of honour for us in my eyes. They are just too proud to admit it’s amazing. I also enjoy other variations of chips. You might not have noticed Manchester’s recent cosmopolitan surge, Buzzfeed, but you can get all sorts on your chips these days. I’m not even partially irked about this.

Buzzfeed says: “When something’s not mint but actually a bit of a mither.”

We say: This reads like you put it through a Google Translate Mancunian plug-in. The words are all there but it doesn’t quite pull off being a sentence. I’ve lived right in the heart of Manchester for over a decade and you might as well have just typed that with your knees for all it means to me. Soz.

Buzzfeed says: “The fact that Mancunian Way won’t reopen until May because of the massive sinkhole.”

We say: Ok, Captain Danger, you’re made of sterner stuff than me. I’ll wait until the creepy, gaping death holes leading to the fiery centre of the earth aren’t there, and many people have driven across it before I even consider it.

Buzzfeed says: “Being in the Northern Quarter on a Monday and being unable to decide which 50%-off food deal to go for.”

We say: Only people between the ages of 17-23 could find themselves in this quandary enough for it to raise a flag. Sounds like a lovely, carefree existence. If that’s a problem, embrace it.

Things People From Manchester Are Tired Of Hearing

To the question “Doesn’t it rain all the time in Manchester?” Buzzfeed says “Yes literally, all day every day.”

We say: Two things. Sarcasm or otherwise, appalling use of the word literally, which people from Manchester and the rest of the world are sick of hearing. Literally. Actually, the weather was relatively clement today.

To the question “How do I get to Salford Lads Club?” Buzzfeed says “Just follow everyone else.”

To the statement “House prices are so cheap up north” Buzzfeed says “OK.”

We say: Depends who you’re talking to, really. They are compared to London, aren’t they? Sounds like they are trying to converse with you. Give it a go.

To the statement Man United are [amazing/crap/insert adjective here], Buzzfeed says “Cool opinion. Do you have any more?”

We say: Correct response. If someone I met bizarrely spoke out loud with such unnecessary yet concise punctuation, I’d ask them for loads more opinions, just out of sheer fascination. Football or otherwise. What’s the issue here? Enjoy life.

We say: It’s cropped up a few times naturally in conversation, but otherwise, who are you talking to? Can’t see how that could arise so frequently.

To the question “Do you live on Coronation Street?” Buzzfeed says “Go away”

We say: Seriously, what kind of morons are you talking to?  I’m sure there is probably a Coronation Street somewhere in the region and people who live there must be bored of the odd titter in the post office, but that’s it.  If someone actually said “Is Piccadilly Gardens, like, your garden then, ha ha ha” the only thing I’d assume is that they work at Buzzfeed.

I know their lists are usually longer but I got distracted by an Oasis song and a minor mither over a barmcake. Mint!

It would be remiss of me not to admit that during the course of writing this I did eat chips and that it did rain later on. But there were sporadic dry patches so I’m correct on a technicality. Literally.