Bolton Food Festival: a gluttonous journey from glitzy gala to piles of pasties 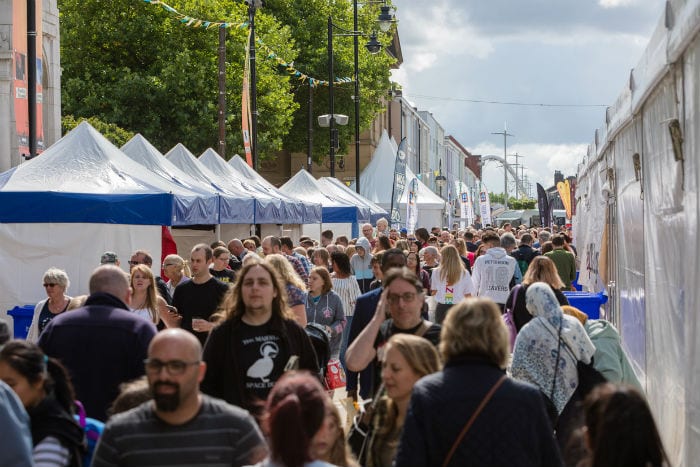 Bolton Food & Drink Festival returned for the 13th year running over the Bank Holiday weekend. Despite dreadful weather at times, there was nothing unlucky about it.

People flocked in to sample food and drink from more than 200 traders, watch top chefs in action, take part in a gin festival, and enjoy live music and entertainment over the four days. 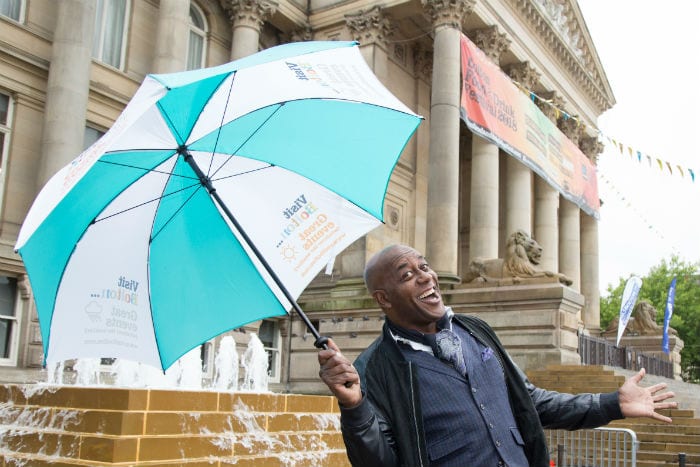 “This is my first festival this year and I’m very excited,” said Great British Bake Off star Nadiya, who cooked and hosted an afternoon tea. “Bolton has a lovely atmosphere, very different from anything else I’ve done.”

I went along to see what it was all about. And to eat my body weight in Carrs pasties, something of a Bolton rite of passage.

Michael Caines launched the festival on Friday and was joined by baker Rose Dummer from Channel 4’s Extreme Cake Makers. She unveiled an Egyptian-themed cake to celebrate the opening of Bolton Museum’s new £3.8m Egyptian Galleries in September. 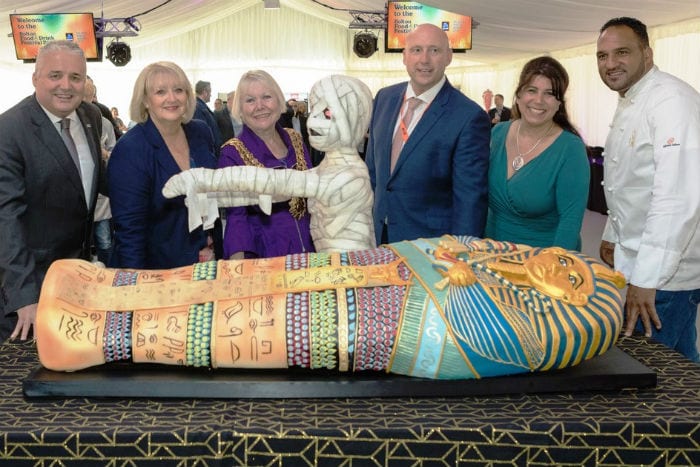 “I’ve been doing Bolton now for at least eight years and what I enjoy is seeing this community festival evolve,” said Michael. “The community spirit is just fantastic. There’s something for everybody.”

Friday night saw the festival launch with a glitzy gala dinner in the festival marquee on Victoria Square. Seven courses were each prepared by a celebrity chef.

Andrew Nutter created the starter, a Goosnargh duck bon bon with pickled cherry and almond granola. He entered the marquee in typically shy, retiring Nutter style to the theme from The Greatest Showman. 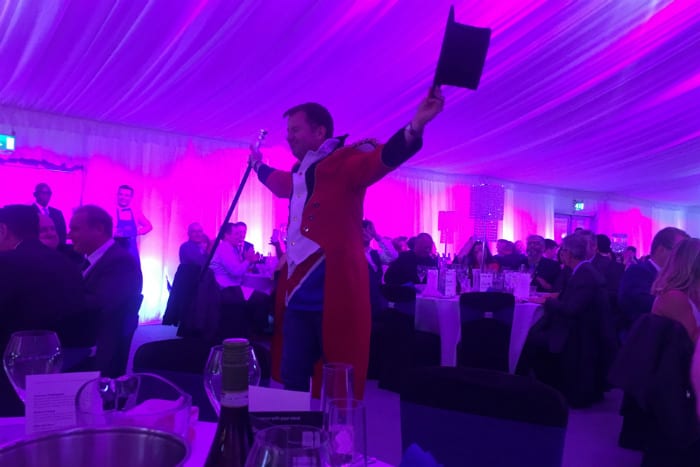 Then over to the team from James Martin Manchester for the fish course: delicate roast brill on the bone served with leeks, crab and shellfish sauce.

Next up was ox tail, fillet of beef and pommes Anna from 20 Stories‘ Aiden Byrne and his brother Louis, followed by whipped goats cheese by Laurence Tottingham, and finally a raspberry and pistachio gateau by Michael Caines.

It was a star-studded menu, but the drinks offering was decidedly more down-to-earth. The festival is organised in association with supermarket Aldi, and the bar accordingly offered a selection of their wines. At supermarket prices.

With Clare Valley Riesling, Marlborough Sauvignon Blanc, Argentinian Malbec and Prosecco all available for under £7 a bottle, it had the potential to be a messy night. And with the marquee location and everyone in black-tie dress hitting the bar, it felt a bit like a wedding reception. Complete with dodgy dad dancing after the meal. 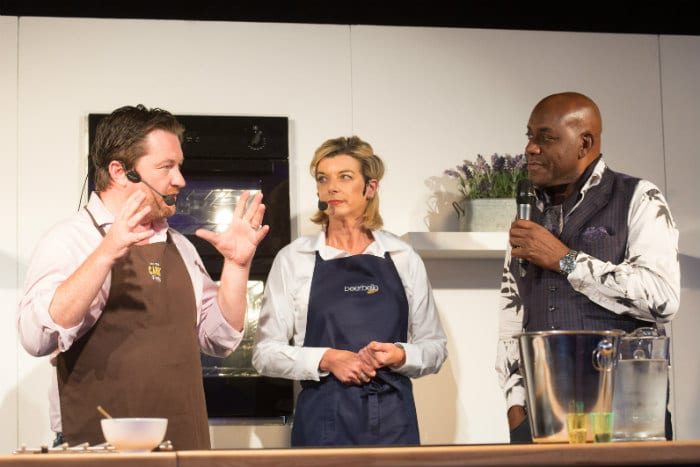 From glamorous galas to plentiful pastry at one of the annual highlights of the festival – a beer and pasty tasting. As a regular pie judge at the British Pie Awards, I was looking forward to this one.

Ainsley Harriott, who has somehow lost none of his energy over the years, hosted the event along with beer sommelier Annabel Smith and Matt Carr of Carrs Pasties, the family-run Bolton bakery founded in 1938. 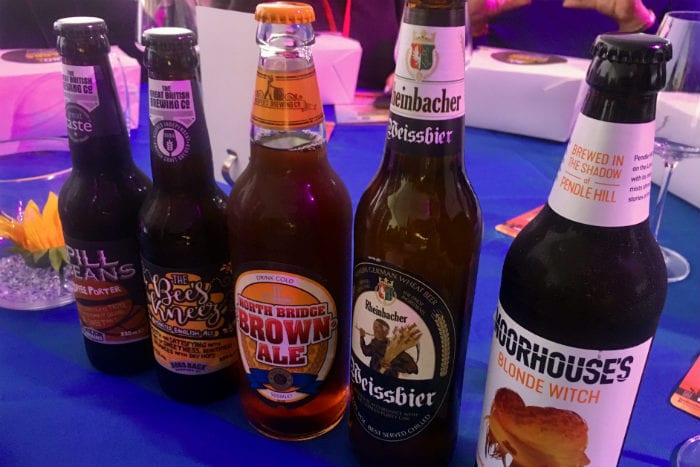 But back to the action. First up a classic meat and potato pasty was paired perfectly with Moorhouse’s Blonde Witch, a beer with floral, herby, grassy notes.

Then came a cheese and jalapeño pasty, too hot for some in the room but an absolute pleasure for a chilli lover like me, matched by a German white beer. Ideal for spicy food, wheat beers are low on bitterness and have a creamy quality which takes sting out of the heat, said Annabel.

An excellent steak pasty included porter from Bolton’s Bank Top Brewery along with mushrooms from Ormskirk. It was served with a brown ale offering a nutty, earthy flavour.

I’d eaten three whole pasties by this point, but struggled on heroically to try the final two – first up a Chinese style pork pie made with belly and shoulder, served with hoisin sauce and a honeyed English ale.

And finally my favourite, a black pudding sausage roll made with 75% pork filling along with the region’s top delicacy from the Real Lancashire Black Pudding Company. It was matched with a coffee porter with dark chocolate notes.

Excellent, hearty stuff. Though I needed a nice sit down afterwards. 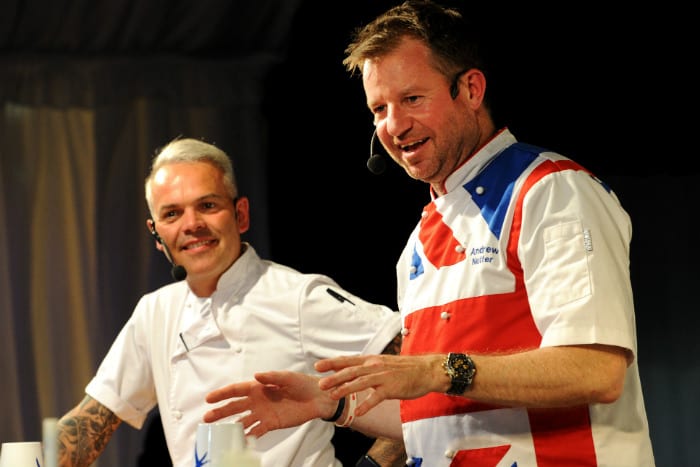 Appetite regained a few hours later, it was time for the festival’s first Sunday Club event, a night fusing comedy with food, with the audience getting to build our own burgers at the table from an array of ingredients and toppings.

It was hosted by comedian Steve Royle with chefs Andrew Nutter and Simon Wood competing to create a dish in 30 minutes live on stage using a random bag of ingredients from – you guessed it – Aldi.

I was invited up to the stage to help judge the results. Simon had made an impressive dish of pigeon with braised endive and fig purée. But Andrew managed monkfish with chickpeas and bacon, followed by three desserts including mango and lemon creme brûlée and chocolate brioche bread and butter pudding. Victory to Nutter. 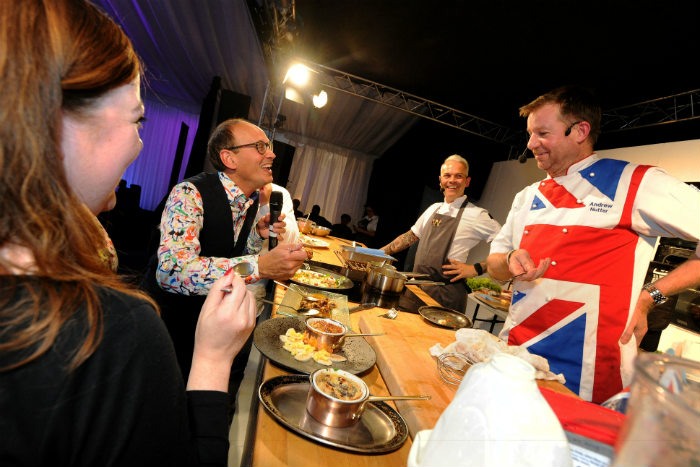 The event was billed as adults only, and it soon became apparent why given the nature of some of the anecdotes. I’m looking at you, Nutter. I’ll never be able to look at a pool table in the same light again.

During the course of an entertaining evening, we learnt that Simon’s guilty pleasure is Pot Noodle on toast, while Andrew would like to be a firework technician if he wasn’t a chef.

The festival finished its four-day extravaganza on Monday, with headliner James Martin. It was a family affair for James, who brought his mum Sue along. Other than Strictly Come Dancing, it was the only other gig his mum had come with him to in 24 years, he said.

“This is the biggest and best food festival in the UK,” James said. “It’s a great event. Ten years ago it didn’t look anything like what it is now. It has morphed into a giant of a food festival – it’s got better every year and it’s one of the few festivals I do.”

“It is hard to imagine, but somehow this festival gets better each year. Official figures are still being calculated but we know despite the weather people were still out in their thousands enjoying our fantastic festival.”