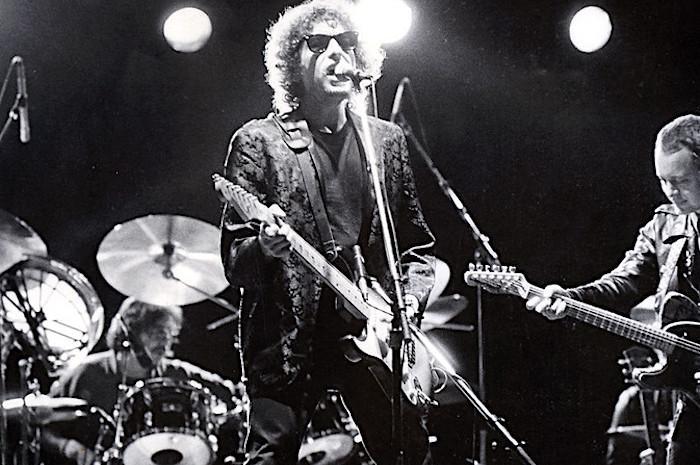 Bob Dylan is 80 today. The voice of enlightened youth of the early 60s is now the endlessly touring troubadour, probably about to retire, whose back catalogue is now top heavy with dud albums post 1977 stacked against some of the most vital works in modern music history pre 1977.

The man cited as the greatest lyricist in rock history, although he himself cited Smokey Robinson, also has a Nobel Prize for Literature from 2017, which he grudgingly later accepted.

In Manchester terms, everything harks back to an infamous gig at the Free Trade Hall on the 17th of May 1966. But now let’s go back to the day before, the 16th of May 1966. Bob Dylan released Blonde on Blonde, one of rock’s first ever double albums, a Wurlitzer of swirling sounds and surrealist drug-fuelled imagery, light years from the restrained acoustic politically-charged folk songs of the early albums.

Dylan was now bored with simplicity and sincerity; he wanted to sound like the Rolling Stones, although he couldn’t resist keeping that powerful harmonica lead, a Dylan trademark.

The next day he returned to the Free Trade Hall for what became one of the most controversial gigs in rock history, almost as charged as the scenes at the Théâtre de Champs-Elysées in Paris for Stravinsky’s Rite of Spring in 1913.

A year previously there had been no problems at Dylan’s Free Trade Hall gig on the 7th of May 1965. He had played his big numbers, starting with The Times They Are A–Changin’, and added some of the new expansive, extensive, stream-of-consciousness epics such as Gates of Eden.

By spring 1966, everything had changed. Dylan was now noisy and brash. He had shaken off his status as the social conscience of the Western world’s Bohemian youth. He was haunted by that role and determined to assume other faces.

It was meeting the Beatles that drove the new Dylan, as well as hearing how the new beat groups were treating traditional numbers, particularly the Animals’ blistering version of a song he had pioneered, House of the Rising Sun.

But the fans just wanted great music and heartfelt messages. Now, 55 years later, listen to The Lonesome Death of Hattie Carroll from 1963, played at the first Dylan gig, dropped the next year. Hear how it still sounds so in tune with the never-ending campaigns for social justice; how Dylan squeezes every ounce of compassion for the unfortunate victim out of every bar while snarling at the privileged white kid who gets six months for assault after murdering the black barmaid.

That was the Dylan people wanted; that’s the Dylan that still captivates and astounds the listener.

Then consider what’s happened to him in 1966. Leopard-Skin Pill-Box Hat, Stuck inside of Mobile, Sooner or Later, Absolutely Sweet Marie: nonsense wordplay, abstract chaos, a dense swirling fog of sound like wading through treacle. No wonder the May 1966 audience wasn’t happy.

As Manchester’s greatest all-time Dylan fan, the late C. P. Lee, once explained: “We made him and he betrayed the cause.” No wonder Dylan soon got sick of that sound himself, took a year off, and came back refreshed and reinvigorated with the low-fi and criminally overlooked John Wesley Harding.

Now for the 17 May 1966 gig. The first half was acoustic, but not a showcase for those still barely-believable solo masterpieces, like Masters of War, but for the new solipsistic vignettes, starting with She Belongs to Me.

For many listeners, the problem was simple. Dylan was now singing about himself, whereas folkie Dylan was communal, singing for everyone.

The storm struck in the second half. It was plugged in. The musicians included some of the majestic figures that soon after created The Band, greatest purveyors of America’s downhome heritage in music form. Not all of The Band though.

On drums that night was not The Band’s usual figure, Levon Helm, but Mickey Jones who later became an excellent character actor and featured in the disturbing sci-fi series “V” and alongside Arnold Schwarzenegger in Total Recall.

I met Jones at the Edinburgh Film Festival in 1988 and he spoke fondly of the night; the fans not so. For those not on stage, the sound quality was warped. This was not Kraftwerk at the Velodrome at MIF 2009. Many were already very annoyed with Dylan for betraying the purity of the folk idiom, not so much by adding an electric guitar, but by its ferocity, especially when mixed with the intensity of Garth Hudson’s organ.

Throughout the second half the Free Trade Hall audience were getting restless: the atrocious sound, its loudness (ELP and Sabbath hadn’t been formed then), Dylan’s throwaway attitude, the incomprehensibility of the lyrics.

It all culminated at the end of the show with Like A Rolling Stone, now seen wrongly as Dylan’s signature song, as the public now erroneously treat Led Zeppelin’s Stairway to Heaven. Someone shouted “Judas”. Dylan responded with “I don’t believe you”, interestingly the title of one of his strange new songs, followed by “You’re a liar.” He paused, then turned to the group and ordered them to “Play fucking loud!”, which they did.

Who shouted “Judas”? Some twenty years later a Keith Butler in Toronto heard a documentary about that night and phoned the radio station to reveal it was him. No sooner had the story gone viral in the music press than another Dylanite, John Cordwell, claimed responsibility.

The mystery was solved by DJ Andy Kershaw who invited Cordwell for a drink at the King’s Arms in Salford and asked him, in a crowded pub, to go the back and shout “Judas”. He then told him “It’s your voice on the bootleg. You’re the Judas shouter.”

The live recording went out as a bootleg LP with the erroneous title Live at the Albert Hall, London. The guy in charge got the tapes mixed up. Both Butler and Cordwell have since joined the great gig in the sky, as did Britain’s greatest Dylan fan, John Bauldie of Q Magazine, back in 1996, involved in the helicopter crash that killed Chelsea owner Matthew Harding.

There was a farcical finale to Dylan’s 1966 Manchester trip.

Consequently the Midland staff got themselves down to Smithfield Market, then in the centre of Manchester, at 5am to find the best oranges. Dylan’s crowd was already unpopular with the hotel management and guests for jamming into the early hours in their rooms. Down they came a few hours later for brekkie, the 25 of them.

They ordered everything off the menu – full English breakfast, kippers, haddock, fresh orange juice – and sat around for an hour and a half eating nothing, simply drinking the juice and coffee and smoking voraciously, as one could do in those pre H&S days. They then upped it and left. An exciting moment ensued.

One of the waiters clearing up noticed that where the great man had been sitting a notebook had been left behind. Inside were lyrics, poems, writings, jottings. Had the waiter been shrewd he would have kept the notebook and sold it for a fortune when Dylan won the Nobel Prize for Literature in 2017.

Instead he rushed after the Dylan party. The singer was sat at the front of the hotel in the getaway car, a Ford Popular, Top Gear fans.

You can find out more about Ed Glinert’s tours of Manchester here.