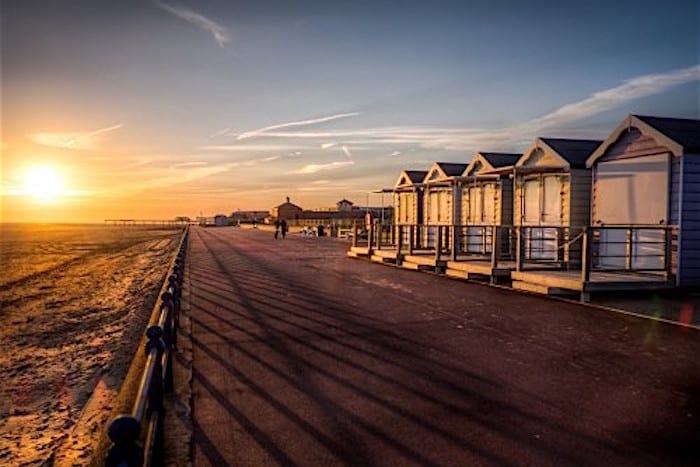 We love Manchester but we all deserve a break from the hustle and bustle of a world-class city, from time to time. Because as they say, absence makes the heart grow fonder.

“It’s the changeable nature of our weather that makes our coast so beautiful,” says historian, writer and beach hut fan Kathryn Ferry. And she’s right. Just 45 minutes from Manchester city centre is upmarket Lytham and sedate St Annes with their stunning beaches and own microclimate. You won’t be short of things to do or places to eat with the Victorian pier, promenade gardens, miniature golf, shops, bars, cafes and restaurants to choose from. From breakfast at Spagó Mediterranean restaurant, lunch at Queen’s public house and/or dinner at Gusto, there’s a vibrant restaurant and cafe culture to enjoy. Stay in a luxury seafront suite at St. Annes Beach Apartments. These stylish new apartments  offer the luxury and comfort you would expect from a 5 star hotel with the space and personalised touches you can only find in a bespoke self-catering property – perfect for the whole family. They’ve thought of everything, even down to plastic cutlery for children and picnics and cinnamon scented sanitary. To book St. Annes Beach Apartments call 01253 789332 and/or visit www.stannesbeachhuts.co.uk

A popular seaside destination since the Victorian era, Southport is just over an hour away from Manchester on the train and has more than enough to occupy you for a few hours. Take a stroll down the pier and visit the vintage penny machine arcade, hire a boat on the Marine Lake or just enjoy an ice cream from Rossi’s. One little known fact about the resort – according to locals anyway – is that the tree-lined boulevards of Paris were inspired by the town’s main shopping street, Lord Street. How so? Louis Napoleon, the nephew of Napoleon Bonaparte and later Napoleon III of France, stayed in Southport in the 1840s and is said to have used the town as inspiration for his reconstruction of the French capital. Is it true? Who knows, but Southport natives love to trot this fact out.

Half an hour away from Manchester, this adorable market town has long been known for its artistic and alternative vibe and has culture aplenty to experience. You’ll often see buskers on the streets, renowned musicians including Patti Smith have performed at its venues, and a certain Ed Sheeran was born in the town. Climb up to the charming village of Heptonstall, where poet Sylvia Plath is buried, explore the independent shops, cafes and restaurants, or just take a stroll along the canal and river. There are numerous walking experiences in the area, with enchanting woodland paths through Hardcastle Crags, a National Trust owned forest. Take the train to Todmorden then walk or cycle the rest of the way along the canal.

Famous for being one of the only places in the north where you can watch red squirrels. It is also known for its beautiful coastal location, massive sand dunes (great for exploring), lush pine forests and historic Formby Hall. Not only can you explore big sandy beaches and some of the highest sand dunes in the area, but the red squirrel reserve is a fascinating nature trail for all ages. Walk around the woodland paths and keep your eyes peeled for these beautiful creatures and other species like the rare natterjack toad whilst listening to the sound of the sea. A short walk down the coast to Crosby beach will bring you face to face with one of Anthony Gormley’s iconic art installations – a series of 100 cast iron lifesize figures stretching along 3km of coastline and extending nearly 1km into the sea.

One of Britain’s best loved spa towns which boasts the title of the highest market town in the country. Located only an hour away with regular train and bus connections, it is known as the gateway to the Peak District National Park and with a thermal spring rising at a constant temperature of 28 degrees, has a history as a spa town going back to Roman times.There is so much more to Buxton with notable architecture including The Crescent dating from 1784 –  a curved building modelled on Bath’s Royal Crescent – and the beautiful Buxton Opera House. This is an ornate Edwardian building attached to the Pavilion Gardens with 93,000 m² of green space, ponds and regular events, making it well worth a visit. Numerous surrounding walks, a museum, art gallery, independent shops, market and flower displays throughout the town show that this is a place that’s proud of itself, and deservedly so.

Easily less than an hour away whether you take the train or drive, a trip to Chester is the chance to visit one of the best preserved walled cities in the country.  It has a rich history – founded as a Roman fort in 79AD and one of the last cities in England to be taken by William the Conqueror, who ordered a castle to be built. Lots of beautiful buildings from the red sandstone cathedral with architectural connections as far back as Norman times, to crooked black-and-white shop fronts including The Rows and gothic revival town hall.  Other attractions include The Grosvenor Museum with numerous Roman relics, Grosvenor Park close to the River Dee and Chester Racecourse. And The Eastgate Clock is supposedly one of the most photographed clock faces in the country.

Back in the day, everybody went to this once booming seaside resort for their holidays but its fortunes dipped when the era of cheap package holidays arrived. It has spent a fortune on reinventing itself as a modern seaside resort, with many people now visiting for short breaks to experience what made the town so popular in the 1950s and 60s – and to enjoy more recent attractions. The spectacular Blackpool Illuminations start on September 2nd. A stay at Blackpool South Caravan Club Site based on two adults and two children costs £32.80 per night.  To book contact The Caravan Club on 01342 326 944 or visit www.caravanclub.co.uk