40 years of Manchester Arndale – how the iconic shopping centre has changed from the 70s, 80s, 90s to now

It has a place in all Mancunians’ hearts. And on 31st May 2019, the Manchester Arndale shopping centre will celebrate 40 years at the heart of Manchester and as a retailing icon of the city.

The shopping centre, one of the biggest in Europe, has witnessed huge changes, as well as devastating moments over its four decade history. It remains the region’s busiest shopping mall with an estimated 40 million visitors every year.

Here we take a look back at how the Arndale has developed over the years, how it bounced back from the 1996 IRA bomb, and transformed into the modern era with new extensions and huge new stores.

You can take a look at how it has all changed in our nostalgic photo galleries courtesy of the Manchester Arndale archive from down the decades – and perhaps spot a favourite shop from the past like the Warner Brothers store, Dolcis and C&A.

The original Arndale Centre started to be built in the city centre in 1971, by developers Town and City Properties, the successors to the Arndale Property Trust, with financial backing from the Prudential Assurance Company and Manchester Corporation (the city council).

It had been a project in the making for years – since the corporation identified by the end of the second world war that the area around Market Street, at that time a patchwork of rundown Victorian buildings, was in need of redevelopment. The Arndale Property Trust was formed in the early 1950s and was named after its founders, Arnold Hagenbach and Sam Chippindale.

The centre opened in stages, with the huge Arndale Tower and the first 60 shops opening in September 1976, followed by the bridge over Market Street and the northern mall in October 1977.

The market hall, Boots and the bridge to the Shambles, over Corporation Street, followed in 1978 along with the bus station off Cannon Street. Anchor stores Littlewoods and BHS followed with the centre completed with 210 shops and 200 market stalls and officially opened by HRH Princess Royal in 1979.

Early features included that distinctive black clock at the heart of the centre, and the rather unusual grey monolith that rose out of fountains in the mall.

By 1981 Market Street was pedestrianised allowing easier access into the centre for the thousands of shoppers thronging to the mall.

Meanwhile inside refurbishments were already underway to improve what shoppers felt were the rather “maze like intensity” with dead ends and no apparent circular route through.

By the 1990s, the Arndale Centre was hugely successful, fully let with shops, raised £20million a year in rents and was visited by 750,000 people every week.

There was the addition in 1991 of the £9million foodcourt, launched as Voyagers, that proved a real hit.  More refurbishments continued between 1991-1993 and the centre boasted popular shops like the huge Warner Brothers Store – with cartoon character models adorning the fountains outside and on the centre entrance on Market Street.

But in 1996 the centre, and Manchester, would be rocked by an event that would change the city forever.  At just after 9am on the Saturday morning of June 15th, 1996, a van was parked up containing a huge bomb on Corporation Street, between the Manchester Arndale and Marks and Spencer.

Police were alerted to a coded warning from the IRA about a bomb and a mass evacuation saw 80,000 people escorted from the city centre – before the bomb went off at 11.15am. Miraculously nobody was killed in the explosion, but over 200 were injured and there was huge amounts of damage to over 1,000 buildings in the city centre.

The old Marks and Spencer building was condemned and demolished, while there was significant damage to the souther half of the Arndale.  But out of the destruction came the new-look Arndale that we see today.

After the bomb, the huge repair and reconstruction work began at the Arndale – including the removal of the once-reviled tiles on the Arndale Tower. In 2003 to reflect its new image it rebranded as the Manchester Arndale that it remains to this day.

Meanwhile Marks and Spencer reopened in a huge new glass building on Market Street, with a new bridge connecting it to the Arndale, in 2006.  It would later split into two as half M&S and half Selfridges on Exchange Street.

The Manchester Arndale continued to develop and change, with the first face of the northern side of the extension, known as Exchange Court, opening in October 2005.  This was followed by the New Cannon Street development which opened in April 2006 containing new flagship Topshop and Topman stores, and Next opened its biggest store in the UK to flank the south side of the mall looking across to The Printworks and the Corn Exchange.

By October 2006 the Wintergarden section of the mall was complete – with a new Waterstones store and a new food court area with huge glass roof letting in lots of natural light and tenants including Bella Italia, Five Guys and Nandos. 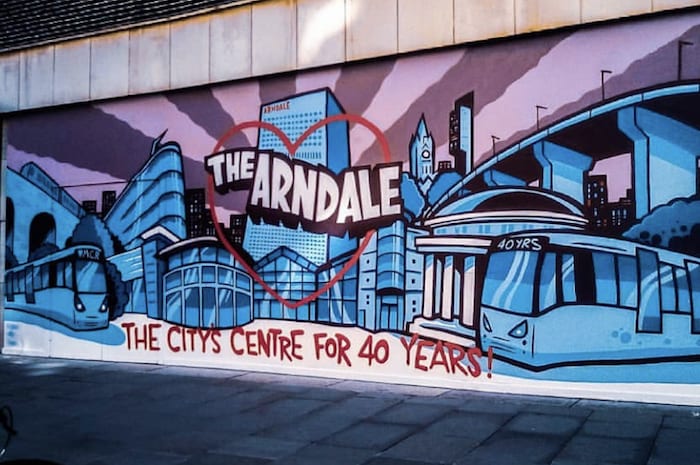 In 2017 the redevelopment of Halle Square began, with plans for a new food and drink-driven space, with the first tenants opening earlier this year including Wolf Street Food, a new Archies and Barburitto.

Today Manchester Arndale welcomes over 40 million shoppers a year making it the most visited inner-city shopping centre in the UK.

David Allinson is the man in charge of the centre as it approaches that big 40th birthday.  He said: “Manchester Arndale has been one of the UK’s most popular and exciting shopping destinations over the years – welcoming 40 million people through its doors every year.

“The opening of the northern extension in 2008 led to the arrival of the country’s largest Next store and attracted international brands such as Apple, Monki, Victoria’s Secret and Pink to Manchester for the first time.

“The centre remains as popular as ever today, highlighted by Japanese fashion brand Uniqlo’s decision to open its flagship store for the north at Manchester Arndale just last month. Our position as one of the UK’s leading fashion hubs has also been boosted by AllSaints’ decision to sign up for a further 10 years at the centre, and the arrival of Quiz, alongside the centre’s more established fashion retailers such as SuperDry, JD Sports and many more.

“Manchester Arndale continues to attract new shops, restaurants, and leisure brands, and we expect to announce more exciting signings in the coming months.”