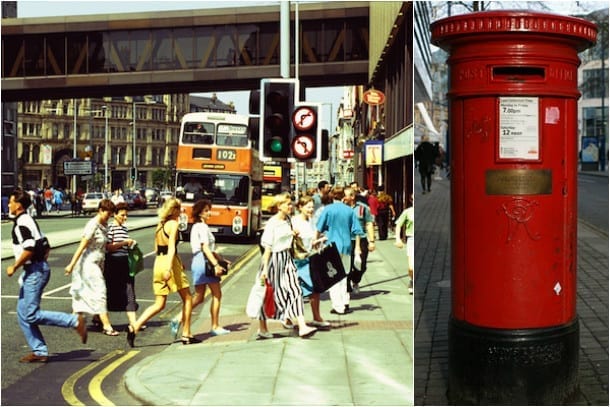 The grim, confrontational mid- 1980s were history. Manchester was on the move.

Manchester had won the right to host the Commonwealth Games in 2002 and, perhaps most crucially – for the process became a blueprint for what was to come – Hulme had been transformed from modern slum to model inner-city suburb.

In an instant at 11.17am, con dent Manchester was faced with the most devastating calamity since the Second World War as the biggest bomb ever detonated on the British mainland in peacetime tore the commercial heart out of the city centre and rained debris and shards of glass down like a nightmarish thunderstorm. More than 200 people were wounded, several seriously but, miraculously, no one was killed.

The bomb itself – a ton and a third of home-made explosive primed with a Semtex fuse and packed into a Ford Cargo lorry – had been spotted soon enough in Corporation Street between Marks & Spencer and the Arndale centre, but ushering an estimated 80,000 people away and holding a cordon half a mile in diameter proved an enormous task. But the police had got lucky for there were many extra of officers on duty that morning because of the football tournament. Without them, the mass evacuation might not have been achieved.

Though the destruction of Marks and Spencer’s and the west frontage of the Arndale Centre – both relatively modern buildings – were the most obvious effects of the blast, the power of the explosion also in icted grave damage on a number of the city’s historic landmarks, most seriously the Royal Exchange, Corn Exchange, Cathedral and even St Ann’s Church.

But speaking after emerging from talks with new council leader Richard Leese, deputy prime minister Michael Heseltine galvanized his audience with a commitment that the government would not only help Manchester reinstate the damage, but would also seize the opportunity to do much more. He declared that construction would be thrown open to an international competition seeking a range of ideas and imaginative concepts to take the city into the 21st century.

The temptation to repair and reinstate as quickly as possible was driven by the imminent opening of Britain’s biggest out-of-town shopping mall just over ve miles to the west – the Trafford Centre, now a £650 million complex of 280 shops and stores, 38 restaurants, twenty cinema screens and 10,000 free car parking spaces.

The city’s decision to resist that temptation and to invite master-planners to create the new Millennium Quarter and, crucially, New Cathedral Street and Exchange Square, paid off to the extent that some people still hold the mistaken belief that the bomb was the making of modern Manchester.

No one has ever been brought to justice for the outrage and it is highly improbable anyone ever will.

So, two decades after the bombing, the question remains: who did it? No one has ever been brought to justice for the outrage and it is highly improbable anyone ever will. But on 15th July, 1996, exactly one month after the Manchester attack, six members of the Provisional IRA were arrested and charged with conspiring to cause explosions at electricity sub-stations in the south of England. At the time they were described as one of the most dangerous terrorist gangs ever to work on the UK mainland and at their subsequent trial each was sentenced to 35 years. By the end of June 2000, under the terms of the Good Friday Agreement, they had all walked free from jail.

The revelations resulted in the only person ever charged with an offense in connection with the Manchester bomb being brought before a jury – Detective Chief Inspector Gordon Mutch, the officer leading the inquiry. He was charged with misconduct in a public of ce for allegedly passing information to crime reporter Steve Panter.

When Panter, called as a witness at the detective’s trial, refused to name his source, he was declared to be in contempt of court. Mutch was acquitted but, unusually, ordered to pay £10,000 towards his own defense costs. The judge in the case was Mr – as he then was – Justice Leveson.

Ray King’s definitive account of the Manchester bomb, Detonation – Rebirth of a City, updated for the 20th anniversary, is available to download via Kindle, price £2.77