His menu is contemporary Spanish, influenced by his love of Catalonian food after much time spent in Barcelona which he has visited on over ninety occasions! Serving diverse, exciting and bold tapas-style cuisine in an informal setting, El Gato Negro won best local Spanish restaurant on Gordon Ramsay’s F Word.

The Times ranked it the number one tapas bar in the country and it received a Michelin Bib Gourmand (an award which recognises establishments offering good food at affordable prices) in 2014 and 2015.

He relocated to Manchester city centre last year when his lease in Ripponden expired. Following a lengthy refurbishment-almost rebuild-El Gato Negro finally opened on King Street to great acclaim. The beautiful building offers three floors of informal dining with a cocktail bar, The Black Cat, on the top floor.

At the heart of the operation remains Simon’s dedication to finding the best produce locally and from Spain to offer his customers the same high standards delivered in Ripponden. He is currently working on a new menu to be launched on October 11.

El Gato Negro has been nominated for four Manchester Food & Drink Festival Awards this year – Restaurant of the Year, Premium & Fine Dining Venue of the Year, Newcomer of the Year and Bar of the Year. 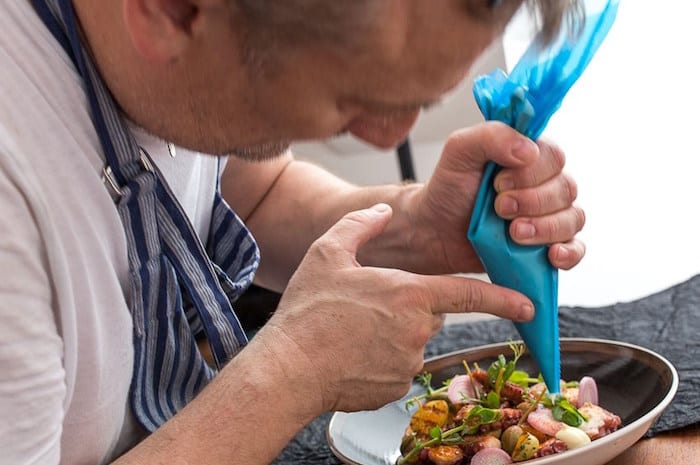 When I was 12 or 13 I started cooking at home. Mum had three jobs so she would leave me a list. Instead of it being a chore, I enjoyed it. I was one of only three boys who did home economics at school. Half the stuff would be eaten straight after our lessons. I was popular in the playground but less so by the time I got home

Two people when I first started out taught me the only way to do things is the right way. I was lucky to have met them early on as it was cemented at such a young age. Learning the classics and how things should be made properly, how running a successful restaurant was all about productivity, reducing wastage, being business savvy. They were David Spencer at Rowley Manor where I got my first kitchen job aged 15 and Derek Baugh at Willerby Manor Hotel.

Probably this. The success here has taken me by surprise. It makes me incredibly proud the number of people who have come here from Ripponden that used to be regular customers there. Although I was extremely proud at Harvey Nichols and my time as executive head chef in Leeds and London, this tops all of that.

I get up at 6.30am and I’m in work before 8am. I like to see all the produce as the deliveries come in and check through all that. I make sure my staff know what we have got on that day and that we are ready for service. Service starts at midday and often goes straight through to 11pm, no breaks. I work five days a week.

My form of relaxation is doing stuff. I find it hard to do nothing as I’m the type of person who has always got to be doing something. I like to visit Barcelona a few times each year and get inspiration for my new menus. I’m working on those now

Make sure you enjoy what you do as then it doesn’t feel like work. And seize every opportunity given to you, like I did with this place, and do the best you can.

I went to school with the drummer from The Beautiful South and we had lessons together. I would have loved to have been a drummer in a band like him.

I have two passions after food – clothes and music. I absolutely love shoes and have over two hundred pairs. You could say I am the Imelda Marcos of the chefs world

Neither. I’m a Villa fan.

Ancoats, some parts are beautiful and I love all the character of the old mills. Piccadilly Basin is one to watch, you can see the area’s development and I think in another two to three years that will be really interesting. Timber Wharf where I live. And London Road Fire Station. That blew me away. All those original features lovingly restored after forty years. A beautiful building, out of this world.

Traffic. Walking in Manchester is great but driving here is a bit of a nightmare. It’s a problem a lot of big cities face though.

The vibrancy, the amount of people in the city. The gap between Manchester and London is narrowing. I think Manchester is getting more and more exciting and more operators are having the confidence to open here. Although saying that, it needs to keep the right balance and I hope it retains its independence.