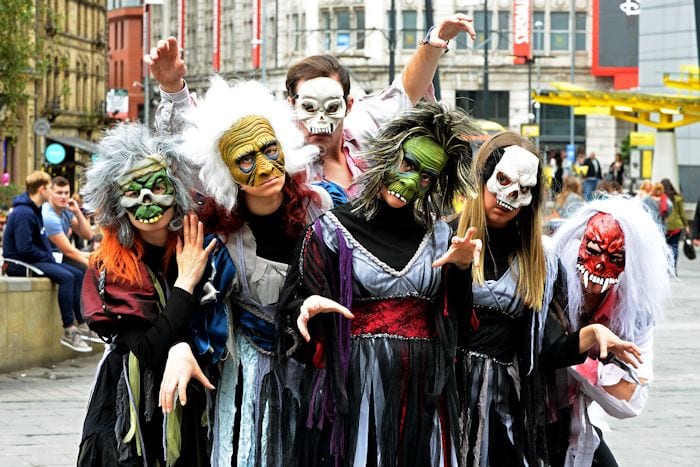 Shoppers were spooked by zombies who took over Manchester city centre, Wigan and Salford over the weekend.

The living dead were warning people of the dangers of turning to payday and doorstep lenders, as well as using expensive credit cards.

The spooky flashmob marked the start of the first Greater Manchester Credit Union Awareness Week (October 16-20) and the launch of SoundPound, a new network of credit unions in the region.

SoundPound is taking on national lenders and showing people there is an ethical, local alternative that could save borrowers hundreds of pounds.

“In this Credit Union Awareness Week, I hope even more people in Greater Manchester will sign up to their local credit union and show that there is a real, local alternative when it comes to saving and borrowing.”

Christine Moore, chief executive of Manchester Credit Union on Brazennose Street, one of the members of the SoundPound network, said: “Too many people in Greater Manchester are turning to costly lenders to help get them through each month or when in a financial crisis.

“But this can mean they end up in a cycle of debt that is not easy to break. Manchester Credit Union has joined forces with other credit unions across Greater Manchester to form the SoundPound partnership to help combat this problem together, making sure people get a fair and ethical deal on a loan, while also encouraging saving.

“It is easy to join a local credit union, with the benefit of an online, phone, and email service as well as a central branch. We put people at the heart of everything that we do – unlike faceless national lenders.”

Christine added: “It is great that tens of thousands of people in Greater Manchester are turning to us to borrow and save, keeping millions of pounds in the Greater Manchester local economy. But there are thousands of more people out there we want to help, so I would urge them to get in touch to see how a local alternative to rip-off lenders could save hundreds of pounds.”

For more information on SoundPound and how to find your local credit union click here.