Women in Manchester music: are the times a-changin’? 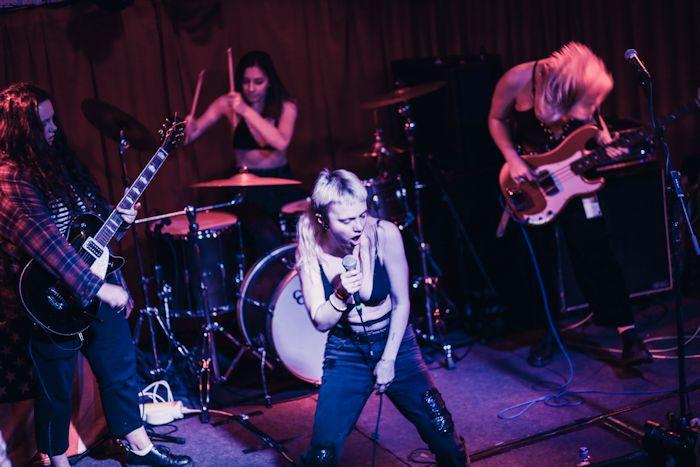 But at the same time it’s undeniable that the Manchester music narrative is dominated by boys. Specifically, white boys with guitars.

We’re long overdue a chance to encourage and spotlight female talent, and two local organisations are now engaged in work to do this.

Brighter Sound have a three-year programme across the north of England for young and emerging female artists and industry professionals which aims to bridge the gender gap in access, opportunity and career progression.

In addition, the Manchester Digital Music Archive is involved in various projects celebrating women in local music, past, present, and future.

I enjoy working in the music industry. It’s full of dreamers and people with the best intentions. But, at the same time, it’s not a utopia untouched by everything that fuels society as a whole – cultural influences and a world order that leads young men to believe that they rule, and that it’s acceptable to deny women a voice or a position of power.

I assume I don’t have to point out that women not being given opportunities or their due are not a states of affairs unique to the music scene.

Female lawyers are sidelined. Around 70% per cent of law graduates are women, but, once qualified, the systems of recruitment, pay, and promotion, and the endemic male-dominated networks are all weighted against them being able to progress to high level positions.

The music story in Liverpool is also dominated by white boys with guitars. The Beatles, Echo & the Bunnymen, the La’s.

I’d suggest one factor in Liverpool, and locally, is that the definitions of both cities revolve around being hard, tribal, masculine. These traits are rooted in a long and glorious history of industrial work, football, and music. Any deviations from this – including anything female – are marginalised.

Journalists and promoters abroad often ask me to tip them off about emerging Manchester talent. If I mention an all-female act like Liines, or Witch Fever, they’re stumped. Brainwashed by the prevailing narrative, their preconception is that the exciting new music in Manchester will always be a band full of boys.

In my part of the music industry, I’m very aware that few women pick up DJing as a potential activity or career path. This is generally true of musicians also. Fewer women at entry-level inevitably means fewer get recognition.

The obstacles female DJs face include being shoved aside by pushier, show-off guys and being subject to the routine misogyny of many audiences, both in person and online.

Again, sadly, this isn’t limited to music but is the case for women who aspire to anything.  Female politicians and journalists face more abuse on social media and elsewhere than men in similar positions.

Despite this, several international female DJs are  currently making big waves on the global circuit, including two Americans – Honey Dijon and the Black Madonna. The Belgian DJ Charlotte de Witte is at Gorilla on February 9th.

The Manchester Digital Music Archive’s initiative includes an exhibition at the Refuge of photographic portraits of women of achievement in the city’s music scene, and an event at the same venue on March 10th. Dubbed Suffragette City, it will feature twenty or more female DJs, all based locally.

At Suffragette City expect to hear DJ’s Paulette and Kath McDermott who both made their mark at Flesh nights at the Hacienda and representatives of two proper party crews, Dance Lady Dance and Disco Mums.

In some areas of the Manchester music industry, women are thriving. For example, there are more talented female photographers documenting what goes on in music and Manchester than ever before, including Elspeth Moore, Charlotte Wellings, Debbie Ellis, Melanie Smith, Karen McBride, Sal Thompson, and Shari Denson.

Female talent is making a contribution across the city’s music industry, from broadcasters like Karen Gabay and Hattie Pearson to singers/lyricists including Melanie Williams, Yvonne Shelton, Maddy Storm, Little Sparrow, and Denise Johnson (her debut acoustic album is due out soon).

The Digital Archive have online features highlighting many women who have played a part in running key Manchester venues. Kate Mountain who ran the Roadhouse, Angela Matthews from the Hacienda, and Sue Langford who worked at the Boardwalk in the 1980s and 1990s.

I only have the room here for fleeting namechecks, but I can’t not mention Pins, five wonder women who’ve just released their their third album, Serve the Rich.

Name checking like this, I’m not trying to give the impression that these women need a male badge of approval. They don’t. But I’m a dreamer, with good intentions, remember?

Hats off to MDMA and to Brighter Sound for their work opening up the industry further for women and celebrating those who have made a contribution.

I recall conversations with a guy responsible for programming music on a local radio station. Routinely, he’d avoid female-fronted bands. He was forever describing the vocals as ‘screechy’. He just didn’t have the ears, the inclination, or the imagination to value anything beyond the clichés of Ladchester.

But how can you ignore the likes of Jane Weaver? Her Modern Kosmology album was one of the gems of 2017, of any gender, any genre. Like dozens of others female musicians with local connections, she’s a credit to the Suffragette city.