Wolf at the Door relaunches this weekend – are tacos and bao buns on the cards? 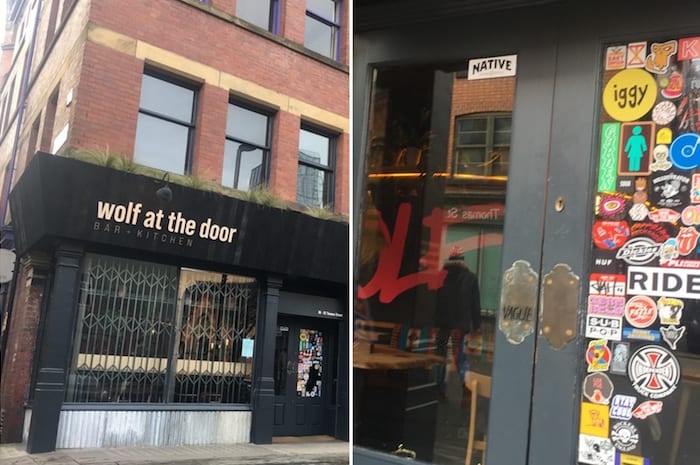 Word on the street is bosses are moving away from the venue’s original fine-dining concept in favour of a more bar-friendly offering, looking to experiment with light bites like tacos and bao buns instead.

Co-owner Lyndon Higginson, who is also one of the directors behind Manchester party bars Crazy Pedros, Cane & Grain and Liars Club, announced the closure earlier this month on Facebook, writing:

“We had a simple plan, to open a really cool neighbourhood bar with amazing drinks and brilliant food.

“We somehow ended up with Michelin Star worthy food and spectacular award-winning cocktails.

“We got a little too excited about the food, the drinks and the design and we just went with it.

“I really do believe we were knocking out some of the best food in our city and I’m eternally grateful to all if our staff who made this happen.

“The issue has always been that we never planned to open so much of a restaurant.

“So… We’re taking a couple of weeks to change our offer slightly and we’ll be back open before the end of the month with a new food offering and some more amazing drinks.”

The three-storey bar has since been given “a bit of a makeover,” and will reopen again this weekend – kicking things off with a huge party on Friday night.

Open to all, first drinks will be on the house and there will be samples of the new food offering going round for people to try.

Music will come from Manchester artists Konny Kon and Poppy Jones, of Children of Zeus and Lovescene respectively. In-house selector Mof Gimmers will also be supplying tunes on the night.

It will be the third launch for the Northern Quarter bar since its initial opening last August.

Housed in what was old Folk and Soul unit (previously Odd bar), Wolf at the Door was originally introduced as Wilderness Bar + Kitchen.

However, following a successful six weeks of opening, owners were forced to change the name to avoid confusion with another pre-existing establishment in Birmingham.

Returning to their party bar roots, bosses now hope that the new offering will be well received by Northern Quarter punters.