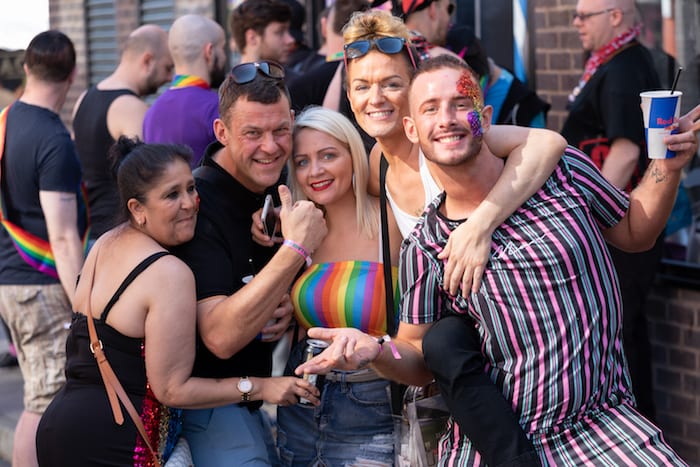 Manchester Pride is over for another year.

This year’s celebration saw its biggest line-up yet this year, with Manchester’s sweetheart Ariana Grande leading the pack with a headline performance on Sunday evening.

But while most people were ecstatic at the news that Ariana was headlining, not everyone was as keen. So it got us wondering, who do YOU want to see headlining next year?

The line-up for Manchester Pride Live was announced in February earlier this year, and immediately got us all buzzing for the Pride weekend to come.

Following the Manchester Arena bombing in 2017 – which occurred just minutes after one of her concerts – Ariana earnt the title of honorary Mancunian, after performing at a fundraiser concert just 13 days later which raised over £10 million for the victims of the bombing.

But alongside excitement came some controversy, with many people asking why the lead headliner for Manchester Pride, a celebration of the LGBT+ community, was not queer herself.

Fans and locals alike took to social media, with some people saying she should be replaced by an LGBT+ artist because they don’t get the recognition they deserve because of their sexuality.

i want to jump on the bandwagon of ariana grande preforming at manchester pride.
she shouldn’t preform.
i know that she’s an ally and all, that’s fantastic, but an LGBTQ+ artist should preform at a pride event. LGBTQ+ artists don’t get enough recognition

Others said the weekend still welcomes allies of the LGBT+ community, and is all about coming to together to celebrate LGBT+ sexuality.

It’s annoying me how everyone is so pissed about Ariana headlining Manchester pride because she’s not a part of the LGBTQ+ community. Like shouldn’t pride be about normalising all sexualities and making everyone equal bringing the community together? (1)

One of the main concerns was the increase in ticket prices, with weekend tickets this year costing just over £70 – more than twice last year.

there’s a lot of talk about Ariana headlining manchester pride but to be quite fucking honest, Pride shouldn’t be a music festival or a concert and it’s honestly baffling to me that you have to pay anything to go to it at all.

Which begs the question: was this a celebration of Pride or another Ariana Grande concert?

It left many worried that with such a high profile, having a non-LGBT+ artist as headliner would take away the essence of what Pride is all about.

Now, the internet is a busy place. With approximately 3.8 billion users worldwide, the probability of Ariana herself seeing these tweets was remote. But it caused quite a fuss  in Manchester, and the 22-year-old singer decided to comment on the speculation that she wasn’t right to perform at Manchester Pride this year.

She said: “The relationships I have with my LGBT fans, friends and family make me so happy. I want to celebrate and support this community, regardless of my identity or how people label me.

“I just [want to] put on a show that makes my LGBTQ fans feel special and celebrated and supported.”

i saw many people discussing this so i wanted to chime in…. hope that’s okay 🖤 pic.twitter.com/7joiZwI1QS

Manchester Pride remains a positive celebration of the LGBTQ+ community, regardless of who’s headlining.

But how can they possibly top this year? We asked YOU who you wanted to see headlining Manchester Pride 2020, and we received a whole range of answers. Some of you threw it back old school, asking for noughties and nineties bands like Take That, Steps and the Spice Girls, while others stuck to openly queer artists such as Sam Smith and Lady Gaga.

And it comes as no surprise that the performer suggested more than anyone else was inspirational and famously body positive artist Lizzo.

Over to you, Manchester Pride 2020 organisers.

Read More »
September 26, 2020
PrevHave you read?Are these themed hotel suites the coolest in Manchester?
Next read...Timothy Spall on playing Lowry, filming in Stockport, and why his own paintings are on display in SalfordNext