Where’s good to eat in Manchester? Hit the shops… 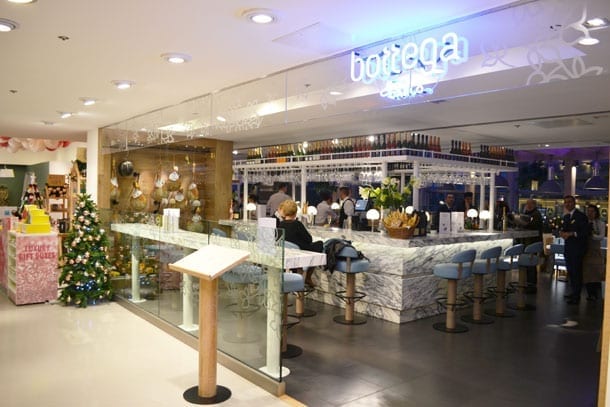 I get asked the following question approximately 4,824 times a week.

‘Where’s good to go for something to eat?’

“…Manchester seems to be abnormally blessed by shops with really good restaurants.”

It’s such an open ended question, I don’t actually know where to start a lot of the time. Also, I class that as almost as big a life decision as ‘should I take that job?’, ‘should I buy that house?’ or ‘should I marry that exotic dancer I’ve been emailing?’

What if I send someone somewhere that’s normally good, but has an off day? I don’t want that on my shoulders.

So oddly, I often send them to the shops.

Not just to buy stuff. But to eat. You see, Manchester seems to be abnormally blessed by shops with really good restaurants (SWRGR).

The second floor of Harvey Nichols has its elegant, refined and consistently capable restaurant, as well as the fun and less formal brasserie – both great for people watching, in store or on the streets below. 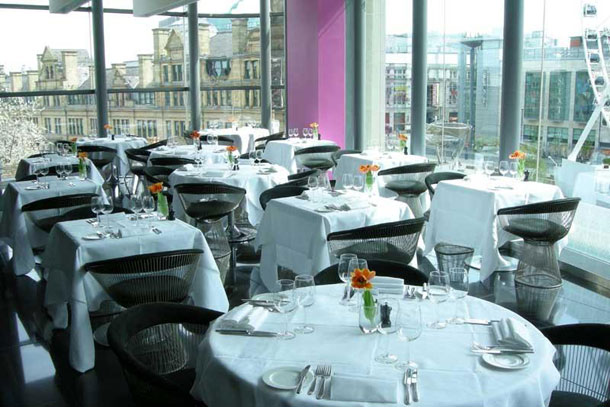 House of Fraser has the double whammy of San Carlo Cicchetti on the ground floor and the wonderfully decadent Tom’s Champagne Bar on the third floor – aside from the fizz, they’ve got chocolates and such like from Slattery’s in Bury.

Selfridges boasts not one, but two eateries from the San Carlo stable – Bottega took over the second floor from Aubaine (which was also really good) last year and is packing them in, as San Carlo does. In the basement, you can find their gelateria tucked away at one end of the beauty hall. 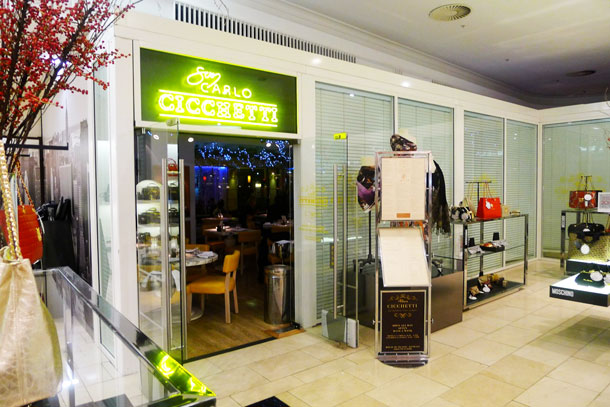 The Corn Exchange may be reshaping from retail to purely food and drink, but the delightful salads and platters knocked out by Salvi’s was always an extra reason to visit.

You don’t even have to go high-end or department store either. Waterstones has a charming café called The View in its Deansgate store; Ginger’s Comfort Emporium has taken over the top floor café in Afflecks in the Northern Quarter and the Manchester Arndale food market is full of local indie delights such as Pancho’s, Wings and the Boggart Hole Clough microbar.

And everybody loves the M&S café. Have you seen their basement deli too?

We also do well for hotels- The Lowry, The Midland, The Radisson, ABode and the Doubletree all have top notch restaurants within.

But the quality of the eating offered by Manchester’s retailers means I quite often end up having lunch next to a handbag concession, or peering into designer women’s wear. In fact, the last three meals I’ve had in the city centre have been in a shop.

I suppose it shows that retailers realise shoppers are a pretty demanding bunch on all fronts, and the better the food offering, the more popular their shops will be with punters. You only had to look at the average lunch service at one of the larger department stores to see how keeping shoppers in with a quality restaurant actually works.

Shoppers quite often don’t know what they want to buy, so when it comes to grabbing lunch, you’re well-placed if you can take the choice away from them and offer something good there and then.

Otherwise, they aimlessly wander the streets, peering in windows and muttering before falling into the safety of some branded chain coffee shop or other.

So if you want to see some of the best Manchester’s food scene has to offer, go to the shops. And probably best stay away from the exotic dancer.