What’s it really like behind the scenes in a proper professional kitchen? 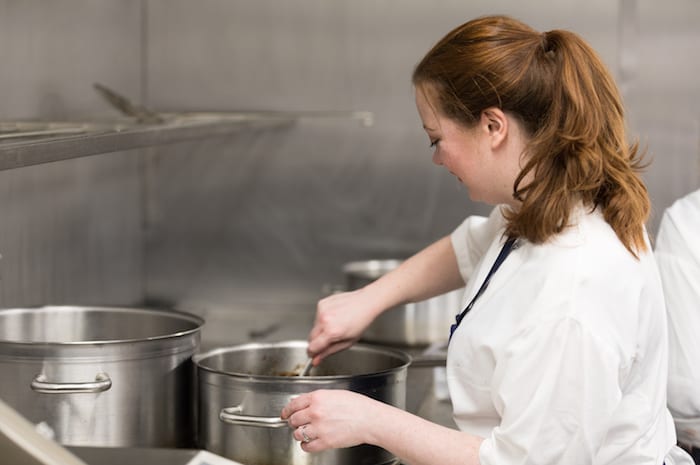 I love good food. I’m well aware just how lucky I am that reviewing restaurants is part of my job. And I also enjoy cooking at home. So when I was asked if I’d join a team of food writers swapping pens for pans to cook a meal for charity, to be judged by the region’s top chefs, I was thrilled. When I say thrilled, I mean utterly terrified.

First, the positives. Action Against Hunger is a great cause, helping malnourished children regain their health and fulfil their potential in nearly 50 countries worldwide. And Too Many Critics was a chance to see behind the scenes at Manchester’s highest new restaurant 20 Stories, and work with acclaimed head chef Aiden Byrne.

But my impressions of professional kitchens had mainly come from TV shows and books, and the odd chef’s table dining experience. Sure, they look noisy, hot, and sometimes sweary, but maybe it would be like cooking at home – just on a bigger scale?

The week before the event, we had to create our own recipe based on one of Aiden’s classic dishes. Except, to make it more difficult, we weren’t told what was in Aiden’s dish. No ingredients list. No method.

I was assigned beef bourguignon. Slow-cooked, boozy beef – that’s just the sort of dish I like to eat at home. But how difficult would it be to whip up in a professional kitchen? And would the chef judges like it? A bowl of something hot and brown may be a hearty, comforting dish for a no-fuss meal with family and friends, but how do you elevate it to restaurant standards?

Putting your own spin on a classic is harder than it sounds. It’s tempting to be too ambitious. We’ve all seen this time and again on MasterChef, and I fell at this hurdle on my very first practice run at home. “I’ll be clever,” I thought. “What if I try to reimagine French bourguignon as a Lancashire hotpot?”

It wasn’t exactly a full-blown disaster but it was a disappointment after several hours of work, and it definitely worked better in my head than on the inexplicably oily plate. Back to the drawing board.

I trawled my extensive collection of recipe books for inspiration, but decided to keep it simple. Stick to what you know. I’d do a beef bourguignon made with two of my favourite ingredients – beef cheek and oxtail. That’s what I’d make if I was at home. And maybe if I topped it with some baby hasselback potatoes it would look a bit more attractive? A bit less…brown? The second practice run went much better. I was feeling fairly confident.

Then the day arrived and I suddenly wasn’t confident at all. In fact, I was physically shaking when I arrived at the restaurant and went up nineteen floors in the lift to the kitchen.

I put on the white chefs jacket I was handed with the trepidation of someone putting on a hospital gown and awaiting an unpleasant examination.

I was the first of the critics to arrive since my dish would take a long time to cook, and I felt completely out of my depth in the restaurant kitchen surrounded by professional chefs. I didn’t want to bother them with too many stupid questions as they were clearly busy preparing dinner for 150 people that evening. A task they somehow made look easy.

As I started to prepare my dish, for some reason a line from Bridget Jones’s Diary kept popping into my head: “Well done Bridge, four hours of careful cooking and a feast of blue soup, omelette and marmalade. I think that deserves a toast, don’t you?”.

Just popped into the kitchen at @20StoriesMCR to see how our critics are doing… busy seems to be the main answer! @EmilyHeward @lrtpublicity & @ruthallan here like busy bees pic.twitter.com/fHuFuUhcvB

When I asked if they had any oven gloves, the chefs practically laughed in my face. That will be a no, then. How do they handle such hot trays with just a cloth?

And everything was so big. Pans the size of hot tubs. A vat of flour you could bury a body in. It was so hot it felt like a sauna. I still couldn’t find a spoon.

Once I was joined by the other critics, I started to relax a bit. We were all in the same, unfamiliar boat. A glass of wine was most welcome, and for a short time I felt like Keith Floyd. Glass in hand, chatting, stirring my sauce which was satisfyingly rich and dark and glossy. But pride comes before a fall.

Even on its lowest setting, the gas hob was much fiercer than my oven at home. The gentle simmer wasn’t as gentle as I was used to, and my sauce was rapidly boiling away. What was left was splitting into oil and black gunk. Meanwhile, the meat remained stubbornly raw.

One of the professional chefs saw my panicked face, took pity on me and promptly tipped a vast bag of stock into my pan. Now it resembled dog food floating in soup.

“It will be fine,” he said. “You’ve got a couple of hours for it to reduce.” I don’t know how they remain so calm under pressure. Those two hours felt more like two days.

Cooking for family is one thing. I can blag my way through a mess with “well, it’s supposed to be rustic.” Cooking for the region’s top chefs – including Stosie Madi from Parker’s Arms, Andrew Nutter, Hawksmoor founder Will Beckett, Adam Reid at The French, Steven Smith from The Freemasons at Wiswell, and Michelin-starred Mark Birchall from Moor Hall – was daunting beyond belief.

By the time we came to plate up, the critics were already exhausted. I hadn’t sat down in ten hours. I hadn’t eaten since breakfast. And as soon as I ran my hands under hot water, I suddenly realised how many tiny burns I had.

Would I do it again? Almost certainly. I (mainly) enjoyed my time in the kitchen, I learnt a huge amount, and I was frankly overwhelmed to have been crowned the winner. Even better, Action Against Hunger raised an impressive £22,262 on the night – a figure which is still rising.

I also have a newfound appreciation for exactly how hard chefs work. It’s made me very grateful that I’m usually on the other side of the pass.

Donate to Action Against Hunger here.