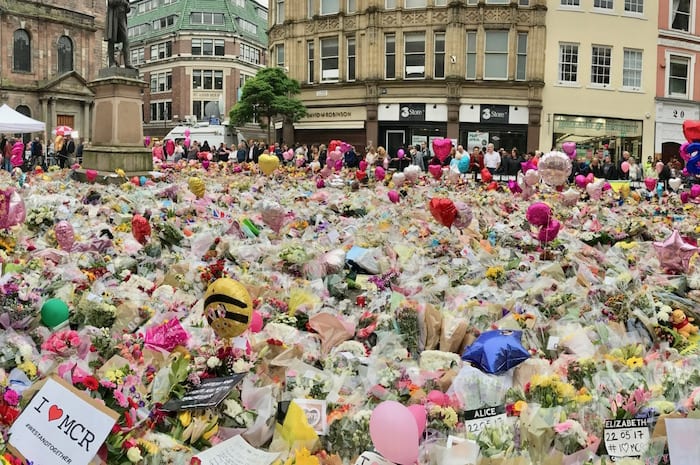 We’ve been through a lot of trauma in the UK lately. The terrorist attack in Manchester was a massive shock to me as I use Victoria Station frequently and because the suicide bomber lived just a couple of miles away from me.

The area where I live, Old Trafford, is very integrated. On my road we have Sikhs, Afro-Caribbean people, Irish people, Muslims and British white people, and we all get along fine. My kids have friends of all different ethic groups. That’s partly why it was so shocking that, just two miles away, a confused, alienated and brainwashed man was plotting mass murder.

In the midst of negativity, it’s important to remember the positive things that can emerge from tragedy and suffering. The most amazing thing about disasters are the acts of incredible altruism and self-sacrifice they give rise to.

I have a friend who is 96 years old who was at Dunkirk in the Second World War, when hundreds of thousands of British soldiers were evacuated across the English Channel while being bombed and shot at by German fighter planes. “The whole situation was so extreme,” he told me, “from the best in the human nature to the absolute worst.”

This applies to terrorist attacks too. The absolute worst in human nature – the mass murder of innocent people – gives rise to the absolute best. Here’s a brief summary of the some of the acts of heroism that occurred at the Manchester attack.

A homeless man called Chris Parker was waiting outside the concert arena, and rushed in when he heard the explosion.  “Instead of running away, my gut instinct was to run back and try and help,” he said. He saw a young girl who had lost her legs in the blast, wrapped her in a t-shirt and helped her to contact her parents. He comforted an elderly woman who had serious head injures, who died in his arms.

Another homeless person named Stephen Jones was sleeping rough near the venue and also rushed in to help. He found many children covered with blood, screaming and crying. With a friend who accompanied him, they pulled out nails out of the children’s arms – and in one case, out of a child’s face – and helped a woman who was bleeding severely by holding her legs in the air. “It was just my instinct to go and help people out,” he said.

There were countless stories of bravery. An off-duty doctor who was walking away from the concert after picking his daughter up ran back into the foyer to help the victims.

A woman who saw crowds of confused and frightened teenagers running out of the venue guided around fifty of them to the safety of a nearby hotel. There she shared her phone number on social media so that parents could come and pick their children up.

Taxi drivers across the city switched off their meters and took concertgoers and other members of the public home. Taxi drivers from as far as 30 miles away converged on the city to offer free transport.

For me, all of this proves how absurd it is when some scientists suggest that human beings are innately selfish, and try to explain away altruism as a kind of mistake (or disguised form of egoism).

Human beings are not isolated individual entities. We share the same essence of being, and as a result we are interconnected. This enables us to sense each other’s suffering. When other human beings feel pain, we feel it too. And that triggers an impulse to try to alleviate other people’s pain, as we would try to alleviate our own pain. We become prepared to sacrifice our own safety – even our own lives – for the sake of others, because we sense that we actually are them.

In everyday life, when things are running smoothly and normally, it’s easy for us to switch into a self-centred mode, in which our own needs and desires take precedence. But crises and tragedies reawaken us to our innate connectedness.

Another positive aspect is that, in a related way, tragedies and crises link communities together.

In psychology, the concept of post-traumatic growth describes how people who go through trauma often experience long term positive development.

In the long term, after the initial intense shock and stress has passed, many people report that they feel more appreciative about their lives, that they feel stronger and more confident, that their relationships have become more authentic and fulfilling, and that they have a stronger sense of meaning and purpose.

They often become interested in spirituality, and have a more accepting attitude to death. These long term positive effects have been found across a whole range of traumatic events, such as serious illness, bereavement, accidents and divorce.

And something similar can happen to communities of people. A collective tragedy can shift a whole community into a higher level. What used to be a group of individuals living separate lives and barely acknowledging each other, can became a much more cohesive community, united by their shared sorrow and grief.

Barriers break down, petty resentments and prejudices fade away. The divisions of ethnicity or religion become meaningless. A new sense of empathy and trust develops.

In other words, a community can experience post-traumatic growth. Perhaps even a whole city, or even a whole nation.

Steve Taylor is a psychologist at Leeds Beckett University who lives in Manchester. He is the author of a number of best-selling books on spirituality and psychology